In this tale we meet a variety of people who are living the best they are able after the Second Conflict. The Second Conflict which was also called "The Fall",  "The Reformation", and most commonly, "The Big Stupid". Nana said that some called it the Rapture. Her grandchild is only seven years old and doesn't remember a time before it. Regardless of the name, it was an event that set everyone back to zero in relation to technology, created massive weather events, and left people living hard lives trying to survive. 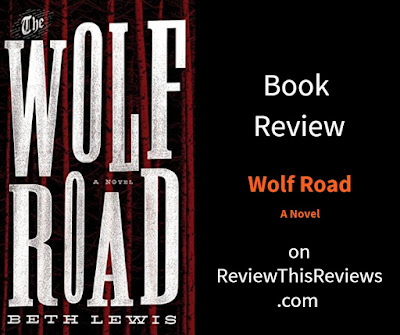 Wolf Road is an apocalyptic psychological thriller. It will not be eveyone's cup of tea.   The villain (or villains?) in this story function along the lines of Buffalo Bill in Silence of the Lambs or Colin Stanton in Bone Collector.

"My house, girl" she said "you just a guest here till your parents come back. Pray that it be soon"

Nana was caring for her 7 year old grandchild because her daughter had run off with a man. They had run off to look for gold in  the north. Nana lived in a shack that she had built and rebuilt with Grandpa. He was killed in the Second Conflict and left Nana to fend for herself during these hard times. Now she also had to care for a child. A sassy, disrespectful child.

Our introduction to Nana is brief as a thunderhead roared into their small town which was situation in the valley between the hills.

A seven year old child was arguing with Nana after being told to go collect pine resin. During their argument it was clear that conflict between the two was not a one-time thing. The child continued to refuse and Nana left the house with the final words "Don't you follow me. I don't even want to look at you no more."

While Nana was gone, the thunderhead rolled into town; terrifying the little girl who shouted for her grandmother to return. She hid under the table and before she knew it, both she and the table were in the air, being carried off in the storm. When she landed, she had no clue where she was or how to return to Nana's shack. But terrified, tired, and hungry she set off to find her way back.

The man found a little girl eating his meat that was hanging on drying racks outside of his hut. She ran and hid but he tracked her (probably very easily given his skill living off the land). When she woke, with her head wrapped in a bandage from being knocked unconscious with the butt of his gun she noted

He sat on a chair by the door, staing at me with eyes like the devil. Shotgun rested against his leg, his hat on his knee. He must a' fallen asleep, his face was all covered in streaks of black dirt. "Where'd you come from?" he said. His voice had a breath of kindness to it.

The little girl referred to him as Trapper. He was "the strangest I'd met" and after he couldn't locate Nana (did he really try?), he named the girl Elka (she could not remember her real name) and trained her how to hunt and trap.  It was not until much later that she learned his name was Kreagar and the grotesque things he was accused of doing.

Magistrate Lyon is after Kreagar. She is the law, such as it is during those times. And she rides with a posse. They ride horseback from town to town and posted black and white printed wanted flyers everywhere. Magistrate Lyon wants justice. She wants revenge.

During and after an apocalypse, it is not safe for a young lady. Elka figures it is especially unsafe for a pretty, feminine, delicate girl who doesn't know her way around the woods. Who has absolutely no outdoors skills. A girl like Penelope. However, Elka learns that Penelope has other life-saving skills such as reading and quick-thinking in situations that involve people.

The two very young ladies have a love-hate relationship and take care of each other (mostly) while both are fleeing danger and while Elka is on the road north to find her parents. Based on the one letter she had received from them, and the letter she had Nana read to her over and over, she pictured her parents living a happy life on their gold claim and her singularly focused plan was to join them.

This story kept me interested with it's blend of apocalyptic fiction with hints of old western. I wasn't sure if I were reading about future events or events that occurred in the past. Even though I was unsure, it worked for me. The characters were unique and easy to imagine. Each one both villain and hero. So much so that it was hard to know who to root for at times.

Due to the pollution and weather related to whatever occurred during the Damn Stupid, there was a slight element of fantasy. Or was it? It is hard to say what would happen when the environment is polluted following bombings.

This was Elka's coming of age story. Where she survives childhood and begins making adult decisions for her life. During a time that she struggles with understanding whether or not she was Trapper's adopted daughter or Kreager's evil accomplice. She has great difficulty understanding those two as the same man. And difficulty deciding how to manage the situation.

This story is about nature versus nurture. Are children born with their instincts and desires, or do we train those things into them? Are evil people inherently evil? Or taught to be evil? Are those who are taught to be evil able to overcome it?

Elka struggles with these things until the very last pages.