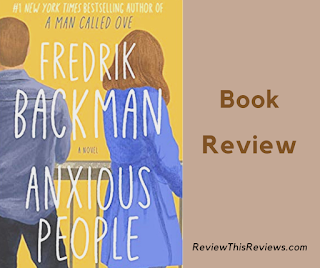 Fredrik Backman is an absolutely delightful writer from Sweden. He writes about people in a special way that portrays who they are, what they are and who and what they appear to be, yet often are not. He describes their hurts and grievances, secrets and passions in a way the reader can relate. Oh, yes, the reader thinks, I recognize this character in my brother, father, best friend, maybe even myself.

Backman's stories take place in Sweden, but it could be anywhere, as people are the same all over.

In Anxious People, we meet a group of people who are attending an apartment open house. Then a failed bank robber bursts in and takes them hostage.  The captives range from a retired couple who hunt down fixer-uppers, a wealthy banker who only cared about making money and can't relate to people, a young couple about to have their first baby and an 87-year-old woman. Then there is the mystery man in the bathroom and the flustered, but still-ready-to-make-a- deal real estate agent. Even the bank robber has issues.

Add in the authorities trying to negotiate the hostages release. The main ones are a father and son who both work for the local police department. They fluster each other and take care of each other.

As the book progresses, we learn who the bank robber is (who failed to rob the bank because it is a cashless bank) and why an attempt was made.  We are given some backgrounds on the people who became hostages. We hear about the police involvement.  The story goes back and forth between what is happening during the hostage situation in the apartment to the individual people and what brought them to this open house on New Year's Eve (a strange day to have an Open House, for sure) to the interviews the police try to conduct with the witnesses after their release. All through this they try to figure out what happened to the bank robber who was no where to be found after releasing the hostages.

As The Story Begins.... in the Author's Words


A bank robbery, a hostage drama, a stairwell full of police officers on their way to storm an apartment.  It was easy to get to this point, Much easier than you might think. All it took was one single really bad idea.

This story is about a lot of things, but mostly about idiots. So it needs saying from the outset that it's always very easy to declare that other people are idiots, but only if you forget how idiotically difficult being human is.  Especially if you have other people you are trying to be a reasonably good human being for.

One single really bad idea. That's all it takes.

There is also the part about how ten years ago a man was standing on a bridge. This seems to be a non sequitur, because this is a story about a bank robber and a hostage situation and the people involved. So why does the author keep bringing up the bridge throughout the story?

So, to summarize, we have a charming novel about a crime that never took place, a would-be bank robber who disappears into thin air and eight extremely anxious strangers who find they have more in common then they ever imaged. Oh, and don't forget the bridge!

If you have read any of Fredrik Backman's previous books, two of which have been reviewed here on ReviewThisReviews, you will be drawn to Anxious People immediately because they were such delightful reads. This one is the same – a very enjoyable read; a book you can't put down to the final page; a book whose ending is as delightful (and surprising) as the rest.

Backman's books are so good that when I finish the last paragraph on the last page, I feel a strong pull to return to page one and begin the book all over again. It's that hard to leave this world of words that is so humorous, compassionate and wise.


For your future reading after you finish Anxious People, check out these other Backman book reviews on ReviewThisReviews.