My Visit to Ronald Reagan Presidential Library: A Photo Review

Up the Long Road to the Reagan Library at the Top

We visited the Ronald Reagan Presidential Library in Simi Valley, California, as part of our 47th Wedding Anniversary celebration.  The library is easy to access, since it's in a part of California that so far does not have the traffic problems of larger cities. You can find library hours and directions here. The driveway was long and curvy as it climbed to the library buildings at the top. This is what we saw when we got there. 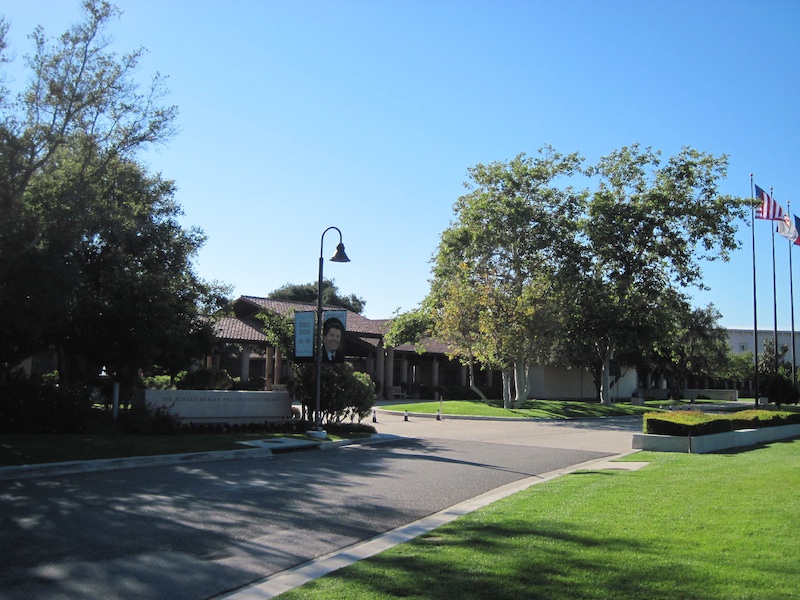 The view below shows the other side of the entrance. 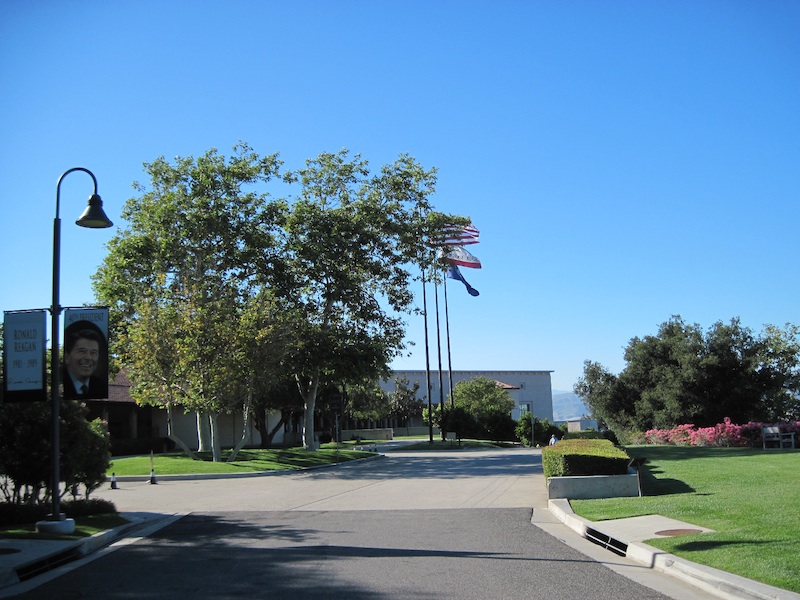 On the way up we passed this picnic area just before we got to the buildings. If you look toward the back of the photo below you will see part of the enormous parking lot. Parking is free, but some spaces require a long walk up to the building.

The Library Entrance through the Courtyard


This is the way to enter the courtyard that leads to the main entrance. You pass through the shadow into the light, where you see the fountain in the courtyard.

Here is a better look at the fountain. You can pick up this view at Zazzle as a postcard, a puzzle, blank greeting card, magnet, or beverage coaster set.  I show it here as a puzzle. You can click the image if you want to purchase it or see the other products.

As you approach the door, this statue of Ronald Reagan himself greets you.

Once inside the door, you can pay for your admission and proceed to the exhibits. There is an order to it. I went accidentally the wrong way, so I didn't see the displays in the order I should have. But it was still a  wonderful walk through Reagan's life － personal, professional, and political. (Note: The docents were wonderfully helpful at getting me back to where I took the wrong turn.)


The library's archives reveal that Ronald Reagan grew up in a poor family. He just didn't realize it at the time. His father was a shoe salesman and the family didn't own a home. When young Ronald was 14 he got his first job － digging ditches. Later he worked as a lifeguard during the summers. He saved his money toward tuition to supplement his college scholarship for Eureka College.

Reagan was raised in Dixon, Illinois, and his mother was a devout Christian and a member of the Christian Church (Disciples of Christ.) His father was Catholic. Nelle Reagan was known in her church as a prayer warrior. She maintained her ties to the Dixon church even after she moved to California. Her Bible is on display at the Reagan Library, along with many family photos and other family possessions in the exhibit on Reagan's early life.

The Air Force One Pavilion

I think the most impressive exhibit was the Air Force One Pavilion. I was overwhelmed by the spaciousness of it when I walked in. Whereas most of the exhibits were enclosed by walls on both sides as you walked the path between them, the Pavilion displaying all the means of presidential transport was wide open and multistoried. Its glass outside walls allowed one to survey the surrounding valley as far as the eye could see. As you look at the photos of Air Force and Marine One, and gauge their size, you realize just how big this pavilion is to house it all. The library makes some space in the Pavilion available for public events.

The photo below of Marine One shows you how large it is in comparison to the tables you see in the background that are often used at events.

Below is a closer view of the front of the Marine One helicopter.

Those of us who have only taken to the air in commercial planes can easily be impressed when we board Air Force One and see what those fly on private or special government planes are treated to. Air Force One is a flying office, command center, and a place to entertain guests and the press corps. Library visitors not only tour Air Force One, but they can also get their pictures taken as they exit. One cannot take pictures aboard the plane legally without official permission. The exterior is impressive enough!

Here's the front of Air Force One

Below is the tail section of the jet that carried President Reagan and all who traveled with him. I took the photos from the second level of the Pavilion. At the back on the lower level you can see the mural depicting all the air transportation presidents have used.

I have included this official video  from the library to give you a better view of the Pavilion. It takes a video to do it justice, but you really can't take it all in unless you actually visit. Honestly, it is truly awesome.

The Pavilion also houses the land vehicles the President and those that protected him rode in.  You will find President Reagan's 1984 Cadillac limousine and a "follow-up" or "chase" vehicle -- a 1986 Chevrolet Suburban. That vehicle handles on-site communications and transport for the agents protecting the President. I had not realized that when the Presidents travel outside the country, these secure vehicles are transported by air to wherever the President will be .  Both vehicles are in the photo below. Please click to see a larger view.

I just had to add this photo with the limo's Gipper license plate. They sure keep the limousine shiny. It might as well be a mirror.


Perhaps some best remember Ronald Reagan for his appeal in a speech: "Mister Gorbachev, tear down this wall."  As we know, the wall finally did come down. One of the displays that really hit me was the reconstruction of part of the Berlin Wall. Here is one view of it. The hole is there for children to crawl through to explore.

Here's a genuine piece of the wall that is displayed outside of the buildings so you can see both sides.

This is the drab side that would have faced inside the wall.

This is the other side, facing outside, where people drew pictures and wrote messages. I believe this part is particularly beautiful.

Learn more about Ronald Reagan in these books, or display his wisdom with this wall art. 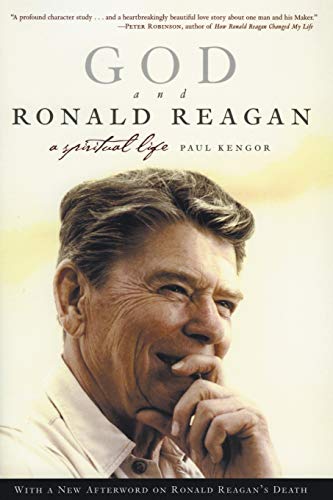 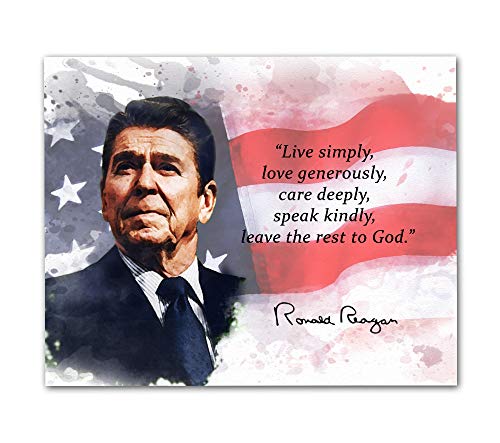 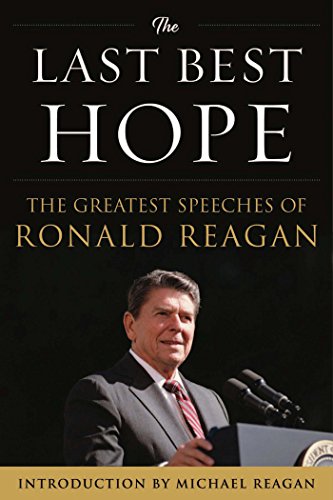 The Last Best Hope: The Greatest Speeches of Ronald Reagan


Here is Reagan's famous "Tear down this wall" speech.


These photos didn't fit under the headings above. One exhibit reflects Reagan's love for horses. I'm not sure if it depicts his favorite horse, El Alamein, or not. I read that El Alamein was buried on Reagan's Santa Barbara Ranch. On the wall around this exhibit there is a life-size photo of Reagan riding his horse. That is not visible in this photo.

A fitting image to complete this post is the final resting place of Ronald Wilson Reagan, who died on June 5, 2004. The lettering on the monument is too light to read in the photo, but this is what it says: 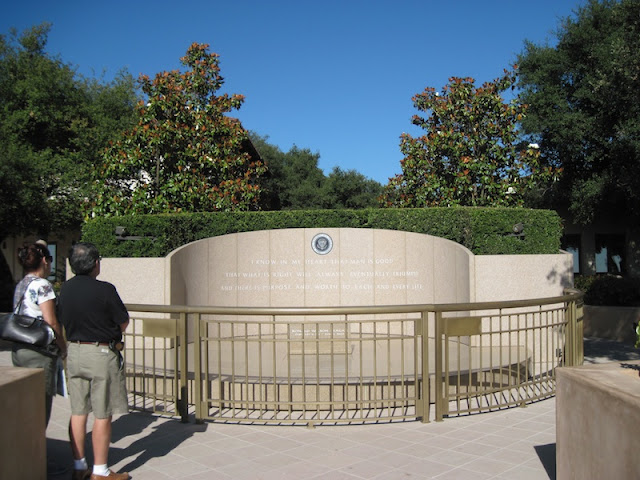 I hope you have enjoyed this mini-tour of the Ronald Reagan Library. If you ever get the chance, I hope you will go see it. Some of the exhibits I didn't have room to mention here are very moving. There is a video of the attempted assassination, and other videos reveal how much Nancy and the President loved each other. The final one left me in tears. I hadn't thought to bring tissues, but a docent was handing them out after I finished watching that video.

Many exhibits deal with Reagan's relationships with the leaders of other nations. You will also see a full-size replica of the Oval Office with Reagan's desk. You can even get your picture taken behind Reagan's podium with his seal. Do you recognize those who who are listening? 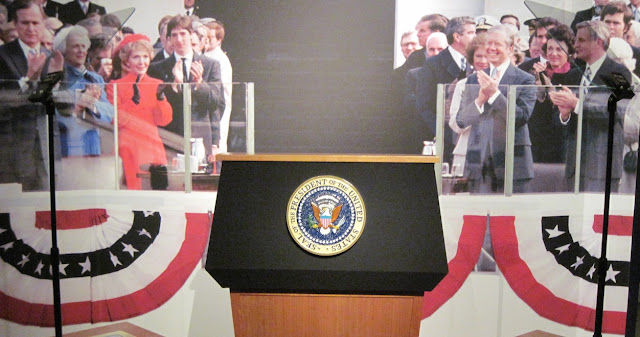 If you visit the Reagan Presidential Library, be sure to leave enough time to enjoy it all. You should be able to get through all the exhibits in three to four hours. If you are hungry, there are two dining options available -- a cafe and a pub. You don't need to pay admission to visit the cafe, but the pub doesn't have an outside entrance for the public. You will also probably want to leave some time to walk the grounds.

All photos and text are © B. Radisavljevic