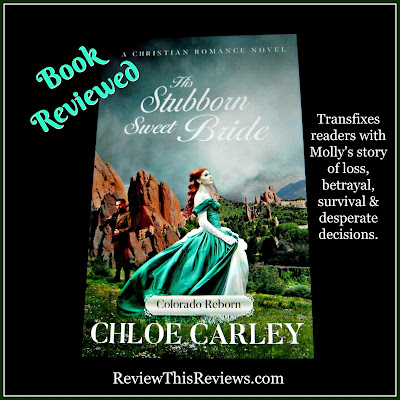 I admit, His Stubborn Sweet Bride (Colorado Reborn Book 1) written by Chloe Carley was a big surprise for me. I loved this book!

This is the first book by the author, Chloe Carley, that I have ever read, but it won't be the last.  I am beyond thrilled to find a new Christian author who writes unique and original content.  That is what I liked best about this book.  I didn't feel like I had ever read one that was similar in plot or characters.  Plus, I loved the unexpected surprise elements in it.

The story takes place in 1878 in several early settlement cities in America, including Cheyenne, Wyoming, Denver &  Indian Rock, Colorado, which is beautiful, but rough country.  The depiction of the towns, the battle between the original settlers and the new comers, as well as the harrowing life events of the main character, are all reasons why I was transfixed by this story.

The Plot of His Stubborn Sweet Bride (Colorado Reborn Book 1)


When a wealthy aristocrat from England, Nate Trowbridge, and his sister, Leonie, inherent their uncles ranch in Colorado, they decide to move to America.  Leonie is young, adventurous, and quite naive, while her older brother, Nate, is steadfast and somewhat boring.  Nate wishes to protect his sister for as long as possible.  He also desires to maintain their good name, respectability and social standing even in the new country.

Upon arrival, they find the ranch is not exactly in the condition they expected.  Immediate repairs and restoration are necessary.  Because there is little else in Indian Rock other than his Circle T Ranch, Nate has to travel to Denver to hire craftsman, and purchase furnishings and decor.  That also gives him the opportunity to visit with old family friends.


His Stubborn Sweet Bride:
A Christian Historical Romance Novel
(Colorado Reborn Book 1)Check PriceNate believes it will be time for him to get married as soon as the ranch is renovated.  He believes his obvious choice is one of the daughters of old family friends.  Actually, over several generations, the two families have married one another to preserve their wealth and status in society.  The Chiswicks live in Denver, therefore they have already made the necessary transition to America from England.  After visiting with them, he has every reason to believe Emmaline Chiswick is like-minded and would welcome his proposal.

Once the house repairs are finished, Nate sends a letter of marriage proposal by way of his ranch foreman, Jem, to Denver when he finds out that Jem has to go to the dentist there.  It is necessary for the doctor to give Jem a dose of laudanum so he can preform the dental work needed.  Jem is still under the influence of the laudanum when he searches for the address on the envelope to deliver the letter.  He immediately notes that the woman doesn't appear to be the type of woman he would expect his boss to court and certainly not to marry, but when Molly opens the letter, she accepts Nate's proposal.  Everything gets pretty hazy for Jem and later he awakens to find himself, along with Molly, on a train destined for Indian Rock, Colorado.


Molly's story is one I had never considered a possibility, but I could easily see how it would happen in 1878.   It made me think of current day human trafficking and how we all want to believe it can't be true and would never happen.

When her father and brothers all died from influenza, Molly was left completely alone.  The bank foreclosed on her family farm and  she had no way to survive.  It seemed becoming a mail order bride would be her best option.

Molly started corresponding with Jack in Cheyenne, Wyoming.  After she sent him a picture of herself, as requested, the man she believed to be a lonely widower sent her train fare to Wyoming.  When she arrived, she was met by Jack and immediately taken to his business, the local brothel.  She was expected to go to work immediately.  The promise of marriage was just a ploy to get her there.  Jack was abusive, threatening, and downright evil.  Molly felt trapped until she decided to risk her life and get away.

Even after Molly has escaped the brothel, Jack swore to find her and make her pay for humiliating him.  She knew she was living under the shadow of fear and possible discovery.  She felt fortunate to get a job as a seamstress in Denver, but when Jack found her, she was once again desperate for escape.  That was when the man with the letter containing a marriage proposal showed up at her door.


My Recommendation of "His Stubborn Sweet Bride"


I have now given you the basic background of the characters and book plot, but you must read this book yourself.  You might even find that you think twice before you jump to conclusions about people and judge their actions.

I highly recommend this book to anyone who enjoys historical fiction.  While it dips into the dark world of murder, lies, criminals, and pure evil, nothing is too graphic, yet it clearly depicts depravity.

In addition to the expected romantic love story, the book also aptly depicts the concern and protective nature of an older brother toward his sister.  I enjoyed the way the author developed both types of love throughout the book.