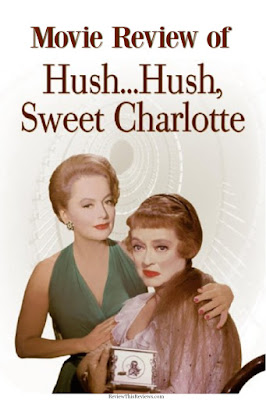 The old classic movies starring Bette Davis still stand out in my mind as the very best suspense movies ever made.  Pure acting excellence coupled with a great plot is all too often missing in current day films.  Therefore, when I want to see a really great movie, I frequently look to the classics of the past.

I was recently reminded of Hush Hush Sweet Charlotte and simply had to watch it again.  I remembered bits and pieces of the plot, but had totally forgotten the reason John Mayhew was killed and who was responsible for his death.

Once again, I was pulled into the story of the movie and the mystery behind the murder.  I had totally forgotten the motive and the secrets surrounding the crime.  Ironically, I didn't remember the opening scene of the movie at all, and it sets the stage for the events that follow.  Actually, I wonder now if I had ever seen the opening before since it precedes the credits and the title of the movie.

This movie makes you think.  It will remind you that betrayal often bears a hefty price.  It will make you grateful that you are not wealthy.  Sadly, wealth makes you a target, especially when you are too old to defend yourself.


Hush.Hush, Sweet CharlotteCheck PriceThe movie and story begin in 1927 when Charlotte Hollis (Bette Davis) was young and in love with John Mayhew, (Bruce Dern) who is already married.  When Charlotte's father (Victor Buono) is informed that his only daughter is entangled with a married man, he is determined to see the relationship end.

The movie opens with the meeting between Mr. Hollis and John Mayhew.  Mr. Hollis is furious and disgusted with idea of his beautiful daughter being involved with a married man.  He refuses to accept that this man will have both his daughter and her inheritance, the land and property he has struggled to make prosperous.

Mr. Hollis demands to know their plans after informing John that his wife, Jewel Mayhew, told him about their affair.  When John tells him that they had planned to run off from a dance together the following night, Mr. Hollis instructs him to break off the relationship with Charlotte instead.  In reference to his home and daughter, he lashes out at John and says, "I created both and I am going to keep 'em."


The Murder of John Mayhew


At the dance the following night, John does as he was instructed and breaks off his relationship with Charlotte.  She is devastated and runs from the room after exclaiming "I could kill you!"

Moments later, the murderer enters the room with a meat cleaver and John is killed by an unseen assailant who cuts off his hand and head.

When Charlotte enters the dance hall with blood on her white formal dress, the music stops and everyone turns to stare at her.  This introduction section of the movie ends with her father approaching her to remove her from the room.


The movie fast-forwards to 1964.  Charlotte's father is dead and Charlotte is basically alone with only her long-trusted housekeeper, Velma (Agnes Moorehead), to care for her.   Rumors of the crazy spinster, perhaps murderer, prompts even the children in town to taunt and tease Charlotte relentlessly.  She never leaves her own property, but they come to her home to torment her.

Unfortunately for Charlotte, Louisiana seizes her property to build a bridge through her land to join roads.  But, Charlotte refuses to leave the house or even acknowledge the legality of them stealing her home & property.  She grabs her rifle and shoots at the demolition team with the road construction crew, which brings the sheriff out.  Even though he doesn't want the responsibility, the sheriff informs Charlotte that she has only 10 days to vacate the premises.  Charlotte is desperate.  She has already contacted her cousin to come and help her.  After all, Miriam (Olivia De Havilland), was taken into her home as a child when her own parents were killed, and subsequently cared for by Charlotte's father.  Surely she will know what to do to save the estate and help her.

When Cousin Miriam admits there is nothing she can do to save the property, Charlotte becomes enraged and reveals that Miriam was the one who told John's wife, Jewel Mayhew, about Charlotte and John's affair.

It becomes all to clear that poor Charlotte is only hanging on by a short thread mentally.  She frequently lapses into confusion and mourns for John all over again.  It also becomes abundantly clear that someone is torturing Charlotte by sending letters and leaving macabre reminders of the murder in her home, as if she isn't tortured enough by the memory of her lover being killed.  She even begins to believe that John is visiting her again, playing the piano, and singing to her.


Dr. Drew Bayliss (Joseph Cotton), who was once Miriam's boyfriend, is Charlotte's attending physician.  He is certain she is close to needing full commitment due to her failing mind.

Charlotte clings to her love for John and highly treasures the gift he gave to her.  It is a music box that plays the tune of the his song to her.

Another Important Character in the Plot


Mr. Willis is an insurance investigator who was previously a news reporter.  He is investigating why no one ever claimed the life insurance after the death of John Mayhew.  He wants to interview Jewel Mayhew, as well as Charlotte, in the hopes of finding the answer.

Both of the women seem to like him.  Jewel Mayhew invites him into her home for a chat.  She gives him a letter for safekeeping along with her permission to open it at the time of her death.  She believes he will know what to do with the information in the letter.

Even Charlotte trusts Mr. Willis and talks openly with him until someone touches her beloved music box.  Then she flies into a rage and orders everyone from the house.


There is no way I will  reveal the end, or even who murdered John Mayhew.  What I will say is that if you enjoy a fabulous suspense movie that has a unexpected end, you will love Hush Hush Sweet Charlotte.