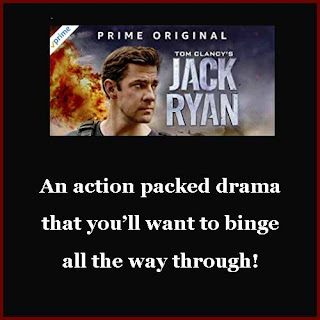 My husband and I have been waiting for the television series Tom Clancy's Jack Ryan to start ever since we saw the first trailer.  It was released on Aug 31st 2018 here in Australia and as a family we finished watching it on the 2nd September 2018.  This is a big deal as the three of us all have busy lives and it takes quite a bit for us to find the time to watch a whole season together and this is the fastest we've ever managed it.

In case that doesn't convince you, it was great!  Now the great thing about this is that we all have different levels of knowledge about Jack Ryan and yet we all enjoyed this Amazon Prime series.  So who is Jack Ryan?

Jack Ryan is a character who was born in a novel by Tom Clancy, the son of a Baltimore cop and a nurse who serves as a marine before becoming a history teacher and finally joining the CIA.  A few of the books were made into blockbuster movies and now we have a television series.

Who Would Enjoy Tom Clancy's Jack Ryan, the Television Series?


Well anyone who likes action packed spy dramas will enjoy this series, you really don't have to know anything about Jack Ryan beforehand.

Let me give you a little background from my family's perspective.  I have read a few of the Jack Ryan novels and enjoyed them before watching the movies.  I must admit when I watched the first movie released The Hunt for Red October with Alec Baldwin playing Jack Ryan I enjoyed it, but wasn't sure which I preferred the book or the movie.

My husband loved the movie - he doesn't really enjoy fiction books so this was always going to be the case.

The next two movies that were released were Patriot Games then Clear & Present Danger with Harrison Ford playing the lead role of Jack Ryan.  Now I preferred these two movies to the books which is a rarity for me, but somehow they just brought the character alive for me.   As you can imagine, my husband loved the movies too!

My daughter hadn't watched any of these movies or read the books, so she was coming to the television series with no expectations.

All three of us thoroughly enjoyed the series and will be waiting with bated breath to see if it gets renewed.

How Does This Jack Ryan Stack Up?


I enjoyed John Krasinski's take on the Jack Ryan character, I haven't really seen him in much up to now.  I think he played the role really well.

Now I could get nitpicky and say that a couple of the scenes could've easily been left out and the continuity of story (from previous movies/books) relating to his relationship to the person who ends up as his wife didn't quite gel, but in reality none of that mattered.

Will We Be Watching Season 2?


The real test of a series is whether or not you'd watch the next season and in case you haven't realized the answer to that is a resounding yes.   I really do hope that they make a second series because otherwise there's going to be three very disgruntled people in this house!

Have You Read Tom Clancy's Books or Seen the Movies?

If you have I'd love to know what you thought of the Jack Ryan character (of course you could have read some of his other books!) and whether you think you'll be watching this series or not.