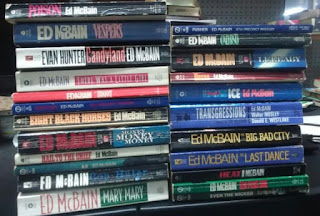 This series of police procedurals were featured around a group of detectives in a big city police department. McBain's publisher was looking for a new group of mystery stories with a fresh and original lead character.  McBain decided his character would be a cop dealing with murders, along with the other crimes most cops have to deal with on a daily basis. But then he thought if he were going to do a whole series, then having just one cop as the central character wouldn't be realistic enough if the character was the only person solving the crimes over and over.

Instead, he decided to base his characters on a squad-room full of cops with different traits and ways of handling situations, all working together. That way he could introduce new characters along the way as one cop got killed or transferred to another department.  Thus his 'lead character' became a conglomerate of characters, different ones being featured in different books in the series, with the others being visible to various degrees throughout each story.


McBain wanted to place the series in New York City, his hometown with which he was familiar.   As he began his research, he found he was at the NYPD almost daily and soon became a pain-in-the-neck to that police department who were too busy working real crimes to sit and discuss fictitious ones. If he were to base his books in New York City, he'd have to verify every fact.

Instead, he decided to 'invent' a city that was LIKE New York but not quite New York.  Thus, a mythical city was born.  McBain named his city Isola, which is Italian for 'island' and if you are at all familiar with NYC you will recognize Isola as Manhattan, as well as knowing that 'Calms Point' is Brooklyn. McBain stated that he had a ball 'inventing' historical background and naming places to suit his fancy for each section of his 'city'.  Along the way, the city then also became a character. Quite a unique approach to a mystery series and one that did not seem to have been done previously.


Who was Ed McBain?


The 87th Precinct police procedural mystery series was written under the pseudonym of Ed McBain. Prior to this series, the author had written and published a variety of short stories under several different pseudonyms.  But unknown to me until I did MY research, Ed McBain's real name was Salvatore Albert Lombino which he legally changed to Evan Hunter in 1952.

Evan Hunter was the author of the well known book and movie 'Blackboard Jungle' and also the screenplay for the Hitchcock film The Birds. By the time he switched to writing crime fiction, he was best known in the literary field as Ed McBain.

"I usually start with a corpse. I then ask myself how the corpse got to be that way and I try to find out—just as the cops would. I plot, loosely, usually a chapter or two ahead, going back to make sure that everything fits—all the clues are in the right places, all the bodies are accounted for.”


*(quoted in the Wikipedia article about the 87th Precinct.)

My favorite part of the background for the 87th Precinct series was the story McBain told in an afterword to the third book, The Pusher.  He had set up this group of characters, detectives working in the 87th Precinct, which he called his 'Conglomerate Hero'.  He introduced them to us individually (see the list of regular characters in the Wikipedia article called 87th Precinct - the detectives of the 87th Precinct), let us as readers find our favorites, then proceeded to bump off mine and everyone else's top favorite ~ Detective 2nd Grade Steve Carella ~ in book three.

See, McBain had originally described the series as being about cops going and coming, cops getting killed and replaced by other cops, as a way to keep the readers interested by introducing new characters here and there. Steve Carella gets shot in The Pusher, mistaken for someone else, so McBain ends the book by killing him off. He thought he was pretty hot stuff, doing something no one else had ever done in crime fiction writing, killing off a guy we'd all been rooting for throughout the first two books. McBain figured he was being innovative!

So he gleefully sends off book three to his agent, who calls the next morning and said “What did you do?  It's Christmas Day, Carella is dead, you've killed the hero.”  McBain tried to tell his agent that no, Carella isn't the hero, he's just one of the characters. It doesn't matter that this is the third book he's been in and that the story ends on Christmas Day!

The agent sends the manuscript on to the publisher and the  next day McBain gets a call from his editor saying “What did you do?” “It's Christmas day, Carella is dead, you've killed the hero.”  McBain kept saying “No, no.” Remember what I told you in the beginning about cops getting killed, other cops replacing them…..remember all that?”  His editor answered with, yes, but nobody said you could kill the hero.  McBain tried again to say “but he isn't the hero.”  His editor replied “He's the hero. Period.”  McBain went back to his typewriter and rewrote the ending.

Needless to say, Steve Carella survived and remained the hero of the 87th Precinct throughout the series!


McBain's first 87th Precinct book, 'Cop Hater' was published in 1956. By the time the series ended shortly before the author died in 2005 at age 78 McBain had written 55 books in the series. (And I've read them all more than once). A truly terrific series of mysteries!

For more book and author reviews, check out