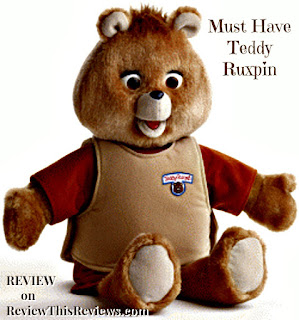 What Every Child Needs and Will Love

As a young mother, I was always thrilled when I found a toy, like Teddy Ruxpin, that teaches, entertains, and captivates one of my children. When that toy appealed to both of my children, I knew I had found a treasure.

Due to the demand, often times these toys are hard to find. With internet shopping today, it is not as hard to obtain the desired item, but 25 years ago, people actually fought crowds and long lines only to find extremely limited quantities.

That was the case with Teddy Ruxpin. 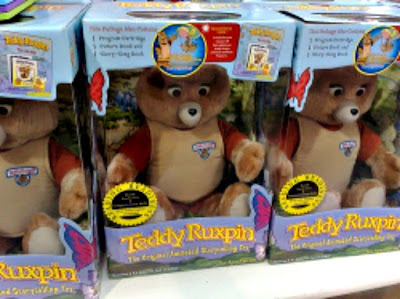 My oldest child, our precious daughter, was only a year old when I made this discovery. I was intrigued when I saw the commercials on television. After looking him up in a catalog, I decided Teddy Ruxpin was a must have for my little girl. We didn't have a lot of money and we had to be very careful about our choices. It was my self-appointed job to find the best deal in town. I scoured the paper every Sunday for weeks waiting for this new toy to go on sale. I even employed my parents to be on the lookout.

Then it happened!  One Sunday morning, just before dawn, the newspaper hit the end of the driveway. I ran out immediately, opened to the store ads and there he was!

Back in those days, my husband worked whenever he was called. It didn't matter if it was a weekend, a Sunday, a special occasion or even a holiday. This happened to be one of those Sundays when he was working. I grabbed the phone and called my oldest brother. He is 6' 4" and a phenomenal athlete. While I did not anticipate him needing to make high jumps for me, I knew he could easily run defense or offense. While my parents babysat, we ventured out at the break of dawn to take our place in line.

As we entered the store, women were running. We became part of the pack. Everyone knew what the objective was. By the time we reached the shelves, everything at my eye level was already cleared out. I wanted to cry. Then this long arm reached over my head. I saw the box as it landed right in my arms. Reality set in. My brother had reached out and grabbed Teddy Ruxpin from the top shelf and handed it to me. The bear was so high up and so far back on the shelf, I didn't even know he was there. I was beyond elation.

Teddy Ruxpin The Original Storytelling Toy
Availability Varies - Stock Photo Image shownCheck PriceWe were laughing and moseying to the checkout with our sweet bear, when out of nowhere, this brazen, probably desperate, woman latched on to my box. I clutched Teddy to my chest as the woman continued to try to pull him from my embrace. Again, this voice from above said "I suggest you let go ma'am." Even in confrontation, my brother was polite. The woman backed off, she even apologized, but I was still a bit shaken by the assault. I don't believe I even responded.

When we got to the check out, I would not relinquish Teddy to the cashier. No, both hands remained on the box that held the treasure while she rang him up. I quickly paid and dashed to the car, fully expecting to be robbed of our new acquisition.

As we drove home, we both kept glancing behind us to make sure no one was following us home. We even drove a circuitous route, taking side streets in order to "shake" any "tail" we may have picked up when leaving the store. We did make it safely home that day. My daughter did receive her gift for Christmas and Teddy became like a family member. To this day, over 30 years later, he still graces the shelves in my daughter's bedroom.

Seven years later, our son needed a Teddy Ruxpin too. Even though our daughter was more than willing to allow her little brother to play with her Teddy, I noticed that our "baby bear" was developing a habit of teething on Teddy's nose. Because Teddy was such a valuable friend to our daughter, I determined to purchase a second Teddy Ruxpin for our son.

This time I was smarter!  I ordered a Teddy Ruxpin from the Sears Christmas Wishbook. That was so much easier and calmer that our first Teddy Ruxpin adventure. 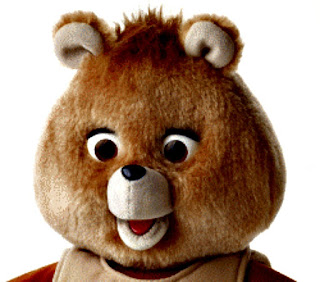 I must give Teddy credit for encouraging my children to read. While I cannot say he is solely responsible, both children could read before they started kindergarten. I truly believe they excelled throughout their classroom years because they had such a solid reading foundation.

Not only did Teddy read with them, he sang with them. When our daughter was really little, Teddy was difficult for her to lift and carry, but he was almost always with her. She would drag him around by his paw. When it was time for a little nap, I remember my baby girl sitting on the couch listening to Teddy Ruxpin and being lulled to sleep by his song. She would hardly part with Teddy. He even rode with her to her first day of kindergarten and patiently waited in the car for her return.

I suppose our daughter was responsible for our son loving the bear too. When Teddy sang, they both joined in and we had our first family trio. Actually, make that quartet. Their Dad frequently sang along too.

I will share a little secret with you, their Dad now sings the Teddy Ruxpin lullabies to the puppies. He thinks I don't know, but those little doggies tell me everything.


Teddy Ruxpin is a sing along, read along, tag along companion. Both of our children treasure their Teddy Ruxpin bears. He is one of the few toys that is still prominently displayed in each of their rooms.

The only negative about either Teddy Ruxpin is the motorized sound that his mouth makes when it moves.  But, like any ugly blemish on a loved ones face, we ignore that.  It really isn't hard to be oblivious to that sound when you love the bear so much.

The Teddy Ruxpin featured above is sold with one music cartridge and one illustrated companion book. The package also includes the Airship story cartridge and the Airship book so your child can read along as Teddy tells the story. There are other story cartridges and books also available separately. There is also an updated, newer version of Teddy Ruxpin available if you prefer.