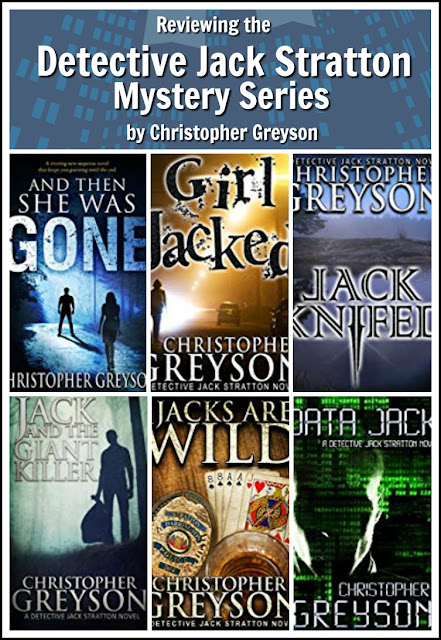 Before I came across the best-selling Jack Stratton mystery series, if you would have told me that a series exists that consists of killer plots, characters that I'd care about, murder and mystery, action and adventure, all while maintaining a moral high ground (i.e. a "clean" read), I'd say you must be dreaming. Of course I'd love that combination, but what writer could possibly pull it off?

In fact, the author pulled off the combination in stellar fashion with the Detective Jack Stratton Mystery series. I've read all six of the current books and look forward to the seventh which is coming soon.

7 Reasons I Recommend the Jack Stratton Series by Christopher Greyson


If you're a reader but are not yet sure that the books will appeal to you, let me explain further why I believe they should be on your "must read" list. Here's my review including the top seven attributes that I appreciate about the Detective Jack Stratton mysteries and why I highly recommend this series to fans of mystery, suspense and, yes, even romance. (Looking for spoilers? You won't find them here.)

1. I care about the characters. I love series books and the key to holding my interest throughout any series is the characters. It took very few chapters of the first book for me to know that I'd be reading the entire series beginning to end. That early assessment definitely proved to be true and now I can hardly wait for the next installment to learn exactly what Jack and Alice have been up to and what comes next.

2. The story lines hold me captive and keep me reading into the night. Gotta love a book that's hard to put down.

3. The military and police connections. I can relate to both as law enforcement and military experience play a major role in my own family. Plus, Jack is around the age of my own sons, so my maternal instincts didn't take long to kick in, even in the first book.

4. Continuity through the series, yet each book stands alone. Read the books in any order that you wish, though if you prefer good chronological order start by reading the most recently published book (And Then She Was Gone) first. Referring to this book as a "prequel" would be accurate and though I read this one first, in some ways I wish I would have saved it for last. I'm currently considering re-reading it while I'm waiting for book seven in the series. (Who says you can't have it both ways?)

5. I like the action scenes. There is plenty of action throughout these books and the author does not spare the details. In fact, many of the fight scenes are described move by move. Frankly, I'm surprised that I liked the descriptive detail, but I did. It didn't bog me down as I read and it offered a clear perspective on the situations and scenes that followed.

6. The venues vary greatly by book. Although most of the stories center around Jack's hometown, you'll find action occurring in Aunt Haddie's foster home, in the dark recesses of a city park, in the bowels of a sophisticated college data and research center, among conflicting crime families crawling with assassins and hit men, in a wealthy jet-setter tycoon's amazing mansion, and even across the battlefields of Iraq.

7. The moral high ground. I prefer "clean" books that avoid profanity and sexual scenes that make me want to look away (or close the book forever). At first I wasn't sure that would be possible with this series, given the murder plots, the seriously-bad bad guys, and the police involvement and military flashback scenes. Let's face it, those topics in real life are usually accompanied by bad language and, in books and movies at least, scenes that involve descriptive sexual exploits. Not so in the Jack Stratton series and I thank the author for that and for the sweet romance that grows with the characters.

Did I mention I can hardly wait for book seven to be released? It's called Jack of Hearts. Watch for pre-order information or choose which book (Kindle or paperback edition) you want to read first from author Christopher Greyson's Amazon page.

If you've read books from the Detective Jack Stratton series, I'd love to read your impressions in a comment below.

~Susan
Read more of my reviews.