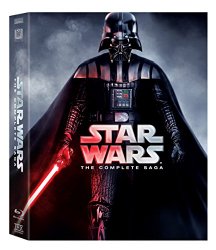 There are a few things that would have made an impact on your lives.  It didn't matter whether you were a girl or a boy, because you would have been touched by this either way.

What in heaven's name am I talking about?  Well believe it or not, just as you were touched in the '70's, '80's and 90's so will the kids of today start to understand as they become the next generation to be "touched" by the STAR WARS phenomenon!

Today, the 4th of September was the roll out day for marketing  all things new and old from Star Wars, as the newest addition to the Movie sequence is about to happen in December of 2015.

The powers that be, already know they have a loyal following as bits and pieces are leaked to the media and people all over the US, Canada and beyond, are eating up anything and everything regarding the new movie.

Star Wars figures, jet planes, trackers, planets, scenes and games are all the rage, as are a whole new aresenal of weapons and robots, transporters and many other futuristic space related items.  All of them coming from the imaginations of the writers, producers, directors and actors in the new film. Film makers and their crafts, will again be highlighted in the production of "The Force Awakens", the newest addition to the Star Wars Movie Family.


The battle between Good and Evil is a theme that will never be old.  O h the characters may change and the surroundings are different, but the basic principle is the same.  Will the strength of a Few Good Men out do the Evil Ones.

If you haven't seen all the Star Wars Movies by now, I would highly suggest that it would be a good time to take in the Series or even better to review and recapture the excitement and wonder before the next installment comes to the Big Screen.

Then be prepared for your children asking for those same toys (just newer) that you loved as a child.  I know my boys will be wishing they still had their original R2D2's and Luke Skywalker figures, along with a few more.  These toys never get old and somehow, the boys of the 70's and 80's can hardly wait to indoctrinate a whole new generation into the story of  "STAR WARS".

The trailers I have seen for the newest edition, will have me wanting to line up early in the month of December, for an eye full of imagination and the excitement of what might be in the future......

To help you get ready for this Action Packed Thriller, I suggest a few Movie nights with the family, so that you are with the "Force" and the "Force" is with you, when it makes it's comeback.