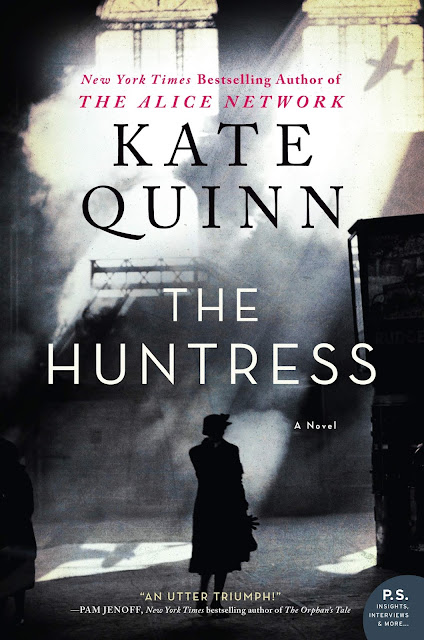 Told in three narratives, Kate Quinn's book, The Huntress, dives into Nazi-era Soviet Union and post-war Boston. It follows the post-war efforts of a small company whose purpose is hunting for and bringing to justice war criminals.

The main characters include Ian, a proper British journalist who was on the ground in Europe during the war and who turns postwar away from journalism to the task of finding war criminals. His purpose becomes a bit clouded by vengeance when he searches for the elusive target for whom this book is titled. That is, the Huntress who ruthlessly lured and killed men, women and children.

The second character is Nina, a woman who grew up dirt-poor and savage in Siberia. As an adult she becomes a pilot for the Soviet Union and a member of the all-female Night Witch bomber regiment who, during her time on the ground during the war, has an encounter with the Huntress.

Finally, we have Jordan, an ambitious teenager who lives with her father and sister in Boston. She wants to become a photographer and to break out of the societal requirement for a woman of the times that says she must get married, settle down and have children.

In the end, all are brought together by the Huntress.


Here’s a peek via the official book trailer from publisher Williams Morrow:


Readers on Goodreads gave The Huntress a 4.27 out of 5 stars and 91 percent of Amazon readers gave it a 4- or 5-star rating. That’s pretty good.

On the back cover, Booklist says that this book is “An impressive historical novel sure to harness WWIIi-fiction fans’ attention.” I agree.

The Washington Post calls this book a “compulsively readable historical novel” and says that it is a “powerful novel about unusual women facing sometimes insurmountable odds with grace, grit, love and tenacity.” I agree.

WHO SHOULD READ THE HUNTRESS?


Fans of World War II fiction, which by the way comes HIGHLY RECOMMENDED by me, will enjoy this book. In particular, if you would like a look into the hunt for war criminals, Russian folklore and the lesser-known world of the Night Witches, you will want to pick this book up. If you enjoyed Kate Quinn’s The Alice Network or Heather Morris’ The Tattooist of Auschwitz you will want to read this book. It quickly becomes a thriller and a page turner demonstrating how war changes people and the costs of seeking justice.

You should know that this book has numerous adult themes, which is what you naturally comes with a book about war crimes. Those themes include abuse, post-traumatic stress disorder (PTSD), alcohol use, war and sex.

Do be aware that there are numerous books called the Huntress. Don't make the mistake that a friend of mine made and read the wrong one. You can find your copy of Kate Quinn’s The Huntress on Amazon by clicking right here.

See you
At the bookstore!
Brenda
Treasures By Brenda

Buy your copy of The Huntress on Amazon.
The Ragged Edge of Night Book Review.
Kristin Hannah’s The Nightingale Book Review.
The Boy in the Striped Pajamas Movie Review.