Book Review of The 9th Girl and the sequel, Cold Cold Heart 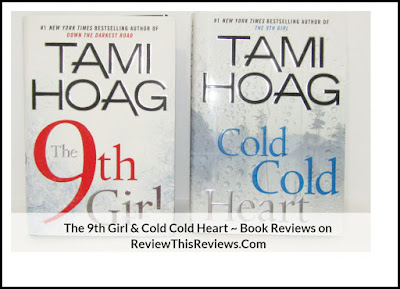 Author Tami Hoag has written over 40 books. first in the Romance genre and then in the crime/mystery/suspense/thriller genres. She has written several series, my favorite being the Kovac & Liska series.

I have been currently re-reading my collection of Tami Hoag mysteries, beginning with my favorite series with characters Sam Kovac and his partner, the wisecracking Nikki Liska whom Sam calls 'Tink' (for Tinkerbell) because she's petite, though tough and determined. They are homicide detectives in Minneapolis, Minnesota.

After finishing the fourth book in the series (The 9th Girl), I happened to pick up one of Tami Hoag's standalone books to read next (Cold Cold Heart) and realized it was a sequel to The 9th Girl. Therefore, I will review both of these books for you today.

It is a frigid New Year's Eve in Minneapolis when a body falls from the trunk of a car into the path of oncoming traffic. Detectives Kovak & Liska are called to the scene. Unidentified, she is the ninth nameless female victim of the year. The detectives need to find out not only who she is, but who wanted her dead.

Not only is she the ninth Jane Doe of the year, but she may be the ninth victim of a vicious, transient serial killer the police call Doc Holiday. Doc Holiday chooses his victims at random, snatching them in one city and leaving them in another, always on a holiday.

When another young woman disappears, the case heats up while the detectives try to find the promising young TV reporter, Dana Nolan before she becomes another victim.

The 9th Girl novel ends with Dana Nolan becoming the only one of Doc Holiday's victims to survive. Cold Cold Heart is her struggle to recover from the physical, emotional and psychological trauma she endured.  After months in the hospital and a rehab center, Dana returns to the small Indiana town she left to work in Minneapolis.

Cold Cold Heart begins with Dana still in the hospital and Kovak & Liska making a brief appearance in the first 2 chapters (a continuation from The 9th Girl) where they try to learn the details of what happened. The problem is, Dana doesn't remember much due to suffering a brain injury at the hands of the killer.

As Dana continues to recover and returns to her family home, media interest brings up the unsolved case of Dana's childhood best friend who disappeared without a trace 7 years ago, the summer after their high school graduation. Viewing life differently because of her injuries and needing something to focus on other than the flashbacks and nightmares and the torment of post-traumatic stress disorder she suffers, Dana begins to look into her past. But the truth of her friend's disappearance may prove to be too terrible to be believed.

Notes from the Author:

Tami Hoag suffered a TBI (Traumatic Brain Injury) as a child which went undiagnosed for many years. Luckily, her only side effects are occasional severe headaches. She also has a friend whose husband suffered a TBI in the military. Combine the consequences with PTSD and the problems worsen.  PTSD is not a condition exclusive to the war-injured military, but also experienced by victims of crimes and other tragedies.

Ms. Hoag believes that many people are not aware of how these injuries affect the people suffering from them and their loved ones. The post-brain injury person is often not ever again the pre-brain injury person remembered by friends and family and this becomes difficult to deal with and understand.

Tami thought perhaps having her character in Cold Cold Heart suffering from TBI and PTSD would help readers understand both people who are afflicted and those who live with them.

A well-written story ~ with a message.


For more book reviews on ReviewThisReviews, check out
ReviewthisReviews: Books