Fantastic Beasts and Where to Find Them Movie Review

Whether you are a Harry Potter fan or not, most of us can easily enjoy the movie "Fantastic Beasts and Where to Find Them".  As a animal enthusiast, I was instantly enchanted by the Fantastic Beasts!  I wanted a pair of each one and I suspect everyone in the theater felt exactly the same way. 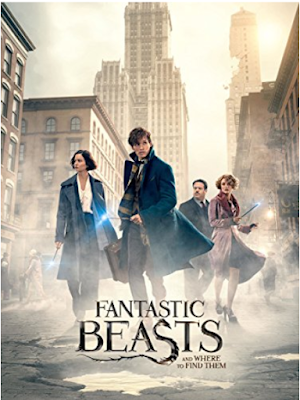 If you are a Harry Potter fan, you will already be familiar with terms like "muggle" and "Magizoology".   But, even if you have never been exposed to Harry Potter, you would quickly figure out their definitions.  I know this with certainty because a member of our group had never seen a Harry Potter movie, nor had he ever read any of the books.  I asked him if that was a problem for him and he said, "Not at all!  You don't have to be familiar with Harry Potter to recognize the face of evil".  He went on to say, "this movie can stand on it own merit."  That is actually very important to note.  The movie can and does appeal to even non 'Harry Potter' fans.


The movie really gets started with a platypus or echidna looking creature called a Niffler that fancies sparkly things.  An adorable little thief if ever I saw one.

A note of interest for animal lovers:  The platypus and the echidna are both members of the same mammal subclass called monotremes.

*Please read my caution for children

"Fantastic Beasts and Where to Find Them" Movie Plot

In the movie, Newt Scamander, the author of the book, "Fantastic Beasts and Where to Find Them", arrives in New York with only a small suitcase in hand.  That suitcase is actually a portal into his world of Fantastic Beasts.  It is also the creatures way into the human world.

When the Niffler escapes the suitcase, the excitement begins as Newt tries to track the little bandit.  His path crosses with Jacob Kowalski who happens to be carrying an identical suitcase.  The suitcases are accidentally swapped and Jacob gets the surprise of his life when he gets back home and opens the one he has.  Several fantastic beasts escape into the city.

As you would expect, Newt has also discovered the mix-up.  However, Newt himself has attracted the attention of an Auror, a police officer of the wizard world, and she is tracking him because he is an unregistered wizard in the city.  The Auror, Tina, and Newt end up searching for Jacob and the lost animals together.  When they find him, they discover that he has been bitten by one of the Fabulous Beast.  Because they need to keep the muggle, Jacob, under observation to know if he will have a reaction, the 3 end up going to Tina's apartment for the night.  It is there that the guys meet Tina's sister, Queenie.

After they have retired for the night, Newt takes Jacob into the world of Fabulous Beasts via the suitcase portal.  It is here that we, the audience, also meet these magnificent magical creatures.

Even though Newt and his Fabulous Beasts are not responsible for the evil in the city, they are brought into the battle between the dark wizard, Gellert Grindelwald, and the Magical Congress of the United States of America when Newt is falsely accused of being Grindelwald's ally.


Aside from telling you a few of my favorite things about the movie, this is where I am going to stop because I really don't want to spoil anything for anyone.

My favorite Fantastic Beast is actually the Thunderbird.  Such a magnificent, powerful yet gentle, bird. As the name implies, this Fantastic Beast is a catalyst of thunder, lightning and rain. He also warns of impending immanent danger. I do so love a creature that warns us to get prepared.

My favorite movie quote from Fantastic Beasts and Where to Find Them is "worrying only makes you suffer twice."

One interesting note, Jacob is a baker.  Once you have seen the movie, you will want to look at these Fantastic Beast Biscuits!  Years before the movie, Elynmac shared these Dragon Biscuits with the online world.

Is "Fantastic Beasts and Where to Find Them" for Children?


I have no doubt this is a question that will be debated for many years to come.  However, I am going to step out with a personal opinion.  I do not think the movie "Fantastic Beasts and Where to Find Them" is a movie that would be appropriate for any child under 12.

I don't offer that opinion lightly.  I think all children of any age would love the beasts and be fascinated by the fantastical animals.  My concern would not be with the animals, but with the violence in the movie.  There are several murders in this movie and they are somewhat jarring and unexpected.

If I err, I would err to the side of caution, especially with the minds of precious children.  They will see enough violence in their lifetimes without having to endure it in the form of entertainment at an early age.

When you see the movie, do come back and tell me your favorites!  I would love to hear them.


Fantastic Beasts and Where to Find Them Movie Review Written by: