Where the Crawdads Sing Book Review 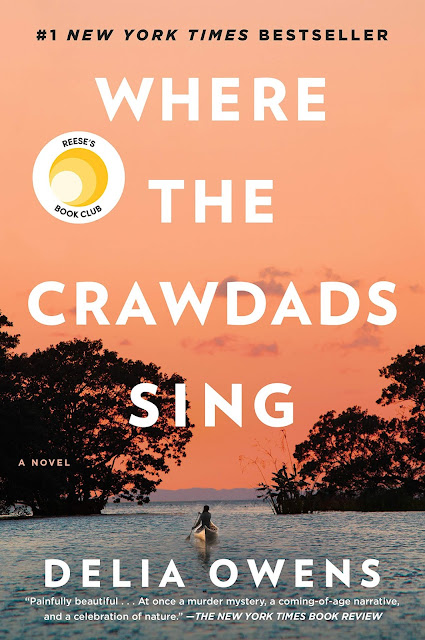 For those who love to travel, the current global atmosphere fraught as it is with many concerns, may be keeping you at home and make a strong case for sitting back and enjoying some armchair travel. If you are interested in a trip to North Carolina’s remote marshlands, you might want to pick up the bestselling novel Where the Crawdads Sing by Delia Owens.

Before I read this book, North Carolina was not on my list of places that I would like to see. Now it is. I thoroughly enjoyed the book though it started off a bit oddly, at least for me. I had just finished reading Michelle Obama’s Becoming, which was an excellent book crafted with simple, straightforward language. When I picked Where the Crawdads Sing up, the language seemed overly flowery with text like, “water flows into the sky”, “clammy forests” and “the marsh’s moist breath.” It was not long, however, before I was whisked away to fictional Barkley Cove in North Carolina and wrapped up in the lives of the main characters.


The story? Well, simply put it is that of a girl’s marsh life from the ages of 6 to 25 both with her family and then abandoned by her family, of how she grows up barefoot and wild and, despite sparse interactions with other people, of how she manages to educate herself in her remote environment. It is rich with details about marsh life in North Carolina. It is a coming-of-age tale and it is also one of romance and murder, alternating between the years of 1952 and 1969. The author herself says that the book is about loneliness.

IS IT A TRUE STORY?


Is Where the Crawdads Sing a true story? Not really though Elle magazine says that the story has "striking echoes" to the author’s life in Africa with conservationist former husband, Mark Owens, both of who were linked to the unsolved 1995 murder of an African poacher though the couple has denied anything to do with the murder and no charges have ever been filed.

The Guardian says that “Surprise bestsellers are often works that relate to the times. Though set in the 1950s and 1960s, this book is, in its treatment of racial and social division and the fragile complexities of nature, obviously relevant to contemporary politics and ecology. But these themes reach a huge audience though the writer’s old-fashioned talents for compelling character, plotting and landscape description.”

Actor Reese Witherspoon, who picked Where the Crawdads Sing  as a book for her book club, helped it build momentum and is quoted in Town and Country magazine as having said, "I can’t even express how much I love this book…There is so much to her story…and it takes place in the breathtaking backdrop of the South. I didn’t want this story to end!"

A whopping eighty-six percent of Amazon readers gave it a 5 star review. It is a New York Times number one bestseller, it has been on that best seller list for 78 weeks and it has sold over 1.5 million copies.

Those are, in my opinion, a whole lot of reasons to check out for yourself the book Where the Crawdads Sing. The majority of readers have loved this book and it comes HIGHLY RECOMMENDED by me. You can find your copy on Amazon by clicking right here and if you enjoy it, be sure to watch for Witherspoon's movie version of the story.

See you
At the bookstore!