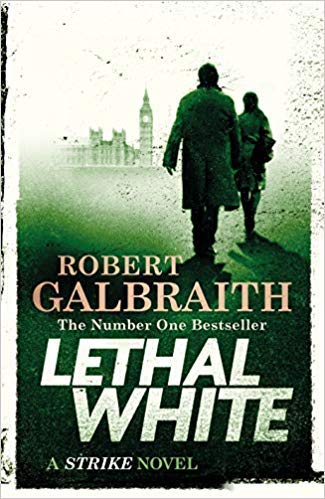 It is a bit awkward to start with the fourth book in a series but, since that is the one I have just read, that is where I am starting.

It is telling that I waited anxiously for Robert Galbraith’s fourth novel, Lethal White. It finally arrived in in September of 2018 and unsurprisingly, it was a giant book worthy of the wait.

Lethal White follows three excellent detective novels crafted by J.K. Rowling of Harry Potter fame and published under the pseudonym Robert Galbraith.  Cuckoo’s Calling, The Silkworm and Career of Evil were all page turners and Lethal White is more of the same. A lengthy read, complex and interesting.

The series continues with the latest mysteries to be solved by the now two-person detective team at Cormoran Strike’s detective agency. It follows the one-legged detective Strike and his new partner Robin as they solve crimes. Both characters continue to live on the edge financially, personally and professionally and wind up in precarious situations in all three areas of their lives.

Strike continues to live in near poverty in a room behind his office. He’s a disabled war veteran who barely looks after himself in general and, as we are given to understand in the book, his leg in particular. He is an amputee, which makes the physical requirements of his job sometimes difficult and perhaps even more so because he fails to look after his leg properly. If I had one complaint about this novel, it would be Strike’s continued difficulties with his leg. Come on Strike, look after your leg! Yeesh. I don’t look after myself perfectly all of the time but if I had a chronic problem, I hope I would do so better than Strike does his leg.

Robin struggles with her personal life as well as with her new career as a private detective. Her family believes she should not be doing the job she is doing because of the danger element but Robin knows that she has landed where she needs to be. This is the work she has always dreamed of doing but never made an effort to pursue. 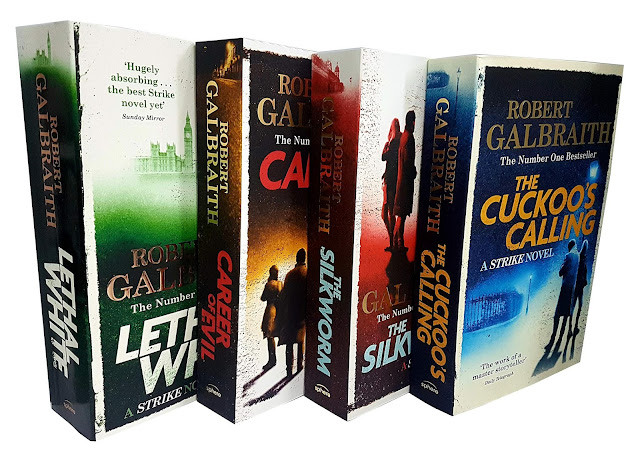 Rowling says that she wrote this book while writing a play and two screenplays for Harry Potter’s world. At 650 pages long, Lethal Weapon goes on as Rowling’s books tend to. Some readers wish they could cut out a bit but if you enjoy a well crafted story, you will appreciate the plot, characters and insights given in this novel. As The New York Times says in their review, sometimes more is better than less.

The Guardian’s review says that this book contains much "highly inventive storytelling” and there is no surprise there. J.K. Rowling is a master at doing exactly that.  The Guardian goes on to say that “there is much here for mystery fans to enjoy” and I agree completely on both counts. Lethal White is HIGHLY RECOMMEND by me for you if you love a good, long detective story. You will, of course, have to read the first three books first. You can find all of Robert Galbraith’s books on Amazon by clicking right here.