Review of the Death On Demand Series by Carolyn Hart 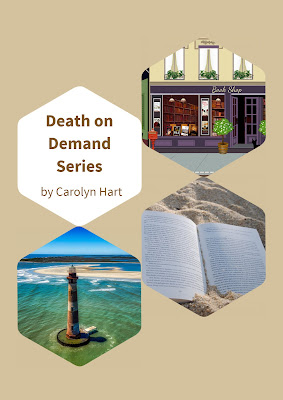 The “Death on Demand” series acquired it's name from the Mystery Book Store [Death on Demand] owned and operated by the series' central character, Anne (Lawrence) Darling. The stories take place on a fictional South Carolina island (Broward's Rock) located off the coast of the mainland and reached only by ferry boat.

I only recently discovered this mystery series and am currently reading my way through the entire series of 27 (to date) books.  I had seen Carolyn Hart's name in the library mystery section several times, but had never read any of her books until about 2 months ago. After reading the first book, I became 'hooked'. The characters are charming, the plots interesting, the reading 'light' with humor and good taste and downright fun throughout.

Although there is usually a murder (or two), it is secondary to the stories of the characters who solve the mystery of the crime. By that I mean there are no heavy details (like blood & gore) to wade through about the actual murder. The descriptions center more on the characters, their backgrounds and the uniqueness of life lived on an island.


The main reason I love the setting is the author frequently mentions island residents going into Beaufort or Charleston, SC and Savannah, GA, all quite easily reached after taking the ferry from Broward's Rock to the mainland. After having spent years camping at Hunting Island State Park just past Beaufort, having visited Charleston several times and having lived in the Savannah, GA area for nearly 20 years, the author's descriptions of these places is so familiar and such fun to re-visit through the pages of the books. If you have never been to any of these places in the 'Low Country' (a geographic and cultural region along South Carolina's coast, including the Sea Islands) you will find the descriptions of the area delightful).

In Book 1, simply titled “Death on Demand”, Anne Lawrence has returned to the South Carolina island of Broward's Rock where she spent many summer vacations as a child to take over her uncle's mystery book store she inherits after his death. The plot begins with a weekly meeting of island mystery writers at her book store during which one of the writers (the most irritating one) is murdered. Anne becomes the primary police suspect, but she and her boyfriend, Max Darling, investigate and solve what appeared to be a classic 'locked-room' mystery.

As the Death on Demand series continues, Anne Lawrence marries Max Darling and together they seem to become involved in one mystery after another, often solving them with the help of several friends who are regulars at both the bookstore and in their lives. One of them is Max's mother Laurel. Laurel is often joined by two other older ladies, Henny, a former WWII pilot and former teacher and Emma, a mystery book writer who also  lives on Broward's Rock Island. Max and Anne also become good friends with the island's Chief of Police, Billy Cameron, who is a regular character in the series, along with his wife, Mavis and other members of this small island police force. As I read my way through the series, the characters become as familiar as my own family.


By using a mystery bookstore for her background, Hart has given her characters the opportunity to talk freely about other mystery authors and books. If you are a mystery story fan (as I am) you will recognize many of the book titles and authors mentioned throughout the series.

Cats play a regular role in the stories too, with a black cat named Agatha (after Agatha Christi, Anne's favorite mystery writer) who lives at the Death on Demand bookstore and a white cat named Dorothy L (primarily Max's cat) who lives at Max & Anne's home.

Carolyn Hart, a former newspaper reporter born in Oklahoma in 1936, has been writing books since she left journalism upon the birth of her first child. Early on, women writers were not much recognized for writing mysteries, but with the advent of authors such as Sue Grafton and Sara Parentsky, publishers began to recognize American female authors in the field of mystery.

Carolyn Hart also has written two other regular series, the Henrie O mysteries which features a 70-something retired newswoman, Henrie O'Dwyer Collins, as she travels the country and the world, solving crimes that seem to follow her as she travels, and the very humorous Bailey Ruth Raeburn Ghost series about the ghost of a woman killed at sea who returns to earth via the "Rescue Express" to help her fictional hometown of Adelaide, Oklahoma while trying not to violate the Precepts for Earthly Visitation and adjusting to her powers on earth.

In 2015, Hart decided that keeping up with all her series and characters was becoming too much, and decided to end the Anne & Max Darling series to give her more time for her Bailey Ruth series.  Instead, as Hart wrote "Anne and Max looked me in the eye and said, “Don’t even think about it!”, so (thankfully) Anne and Max returned.

Today Carolyn Hart, author of more than 60 novels and one non-fiction book about Oklahoma,  today resides in Oklahoma. She is a delightful author who specializes in traditional mysteries, also known as cozy* mysteries.


*Wikipedia defines 'cozy' also known as "cozies", as a subgenre of crime fiction in which sex and violence are downplayed or treated humorously, and the crime and detection take place in a small, socially intimate community.


I would definitely classify Broward's Rock Island, South Carolina as such a small intimate community and Death on Demand as a very delightful series.

For more Book Reviews on this site, check out.