To Think It Began As Just An E-Reader

Doing a review of the Kindle Fire HD has been done, I know. It is not exactly new to the market, I know that, too. The thing is, Amazon just keeps making it better as they go along.

Way back in 2009, I got my very first Kindle. It was the second generation of the e-reader that had taken the world by storm. I loved that little thing! At the time, it was state of the art and quite dependable. Of course, the only thing you could do was download books and read them but it was pretty danged awesome for many of us avid readers.

Those original Kindles were limited when we look back. One could only download books sold by Amazon but there sure were plenty to choose from. There was no color options, just good old fashioned black text (unless you played with the options for a different color of text).

After a few years, I did switch to a Nook. There was the ability to have color images and you could, if you knew what you were doing, download books from other sources besides Barnes and Noble. I have to admit, I wore that one out. I had re-charged it so much that the little piece that slipped into the port snapped off.

By that time, I had a tablet and I could just download the app for both Barnes and Noble and Amazon and read to my heart's content from either site. The bonus was the tablet could surf the internet and all that great stuff. So, when the Nook crossed over the digital rainbow bridge; I saw no reason to replace it. That is until the on and off switch went wonky. Suffice it to say, I do use my devices a lot. They rarely sit idle on any given day.

So, what does a girl do when she finds that she needs a new device to continue to be able to read her books along with just about any other task she wants to do? This girl, took another look at Kindle. This girls is also extremely happy with her choice! 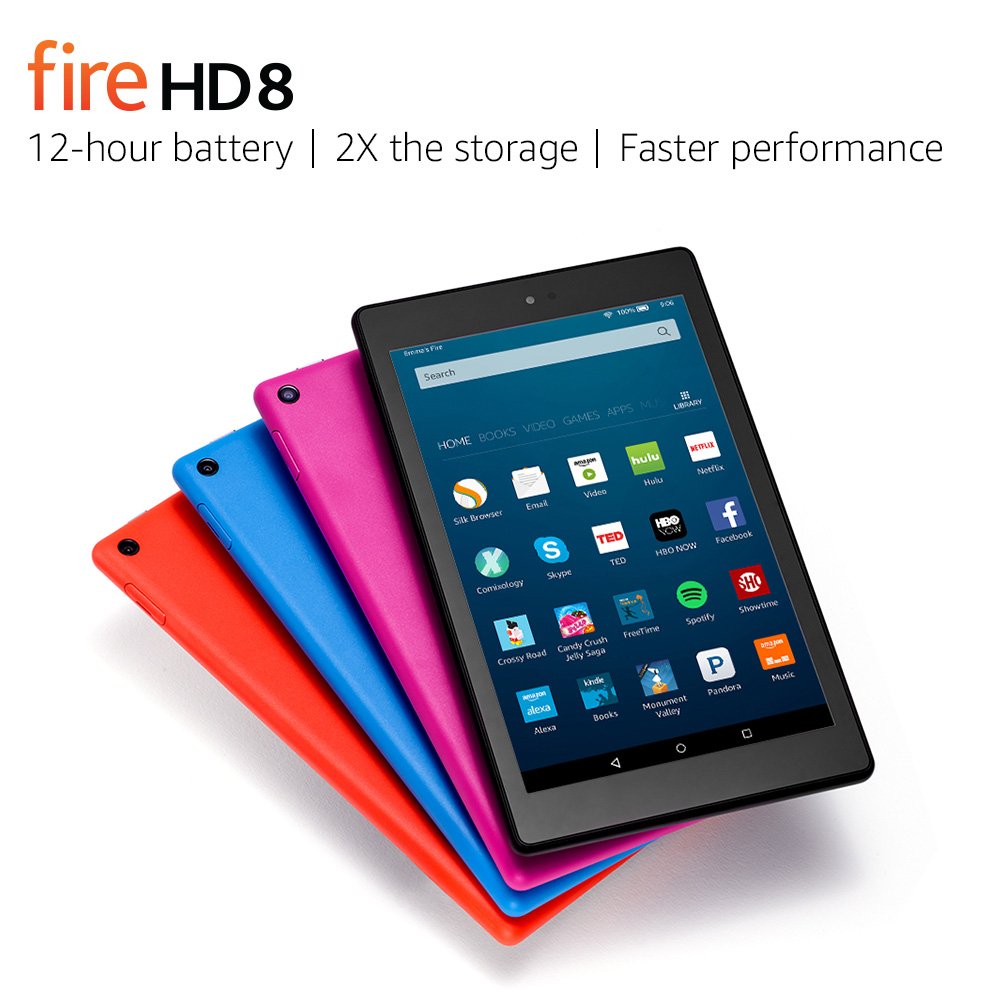 I knew that the Kindle had grown in leaps and bounds from that one I had 8 years ago but I had no idea just how much. I knew there were options of just getting an e-reader but after having had the tablet and its capabilities, I knew a Kindle Fire was my best option. I quickly discarded the option of the HD7 which just means the size of the screen. I thought that might be a little too small for me. I also knew that I did not need an HD10 because it would probably be bigger than I wanted. So, the 8 inch was my choice. I do love the size!

The big surprise was that with this latest generation, Alexa is built in. I have toyed with the idea of getting an Echo but just felt like it was something that was not really necessary. I have had so much fun playing with the Alexa feature on this tablet! Now, it is limited from the perspective that it is not always on waiting for a command. Actually, I like that better. In order to operate the function, I have to hold my finger on the Home button for a second and it comes on. Then, I just say, "Alexa", and whatever command I want. I like the privacy of it all. I also like that it is set-up so that without my personal code, no one can accidentally or on purpose order something that I did not authorize.

The battery life before it needs to be charged is really good. The HD quality of graphics and images is superb, at least a much better quality than on my old tablet. The speakers are good, I wouldn't say that they are superb but better than adequate for my needs.

I was also pleased at the pricing! Way back in 2009 we paid around $400 for my first Kindle. Now, with the specials that are easily found, I paid less than $100. Obviously, the price is something that changes often but right now, they are offering some great deals!

So, if you are looking at replacing your current tablet or gifting someone with one; I highly recommend considering one of the Kindle Fire HD's. I honestly think that you will not be even slightly disappointed.