I simply cannot go through the holiday season without watching the movie Holiday Inn starring Bing Crosby and Fred Astaire.  Not only is the movie fabulous because of the actors, it also features a huge repertoire of Irving Berlin music.  In fact, Berlin actually wrote several new songs just for the movie. 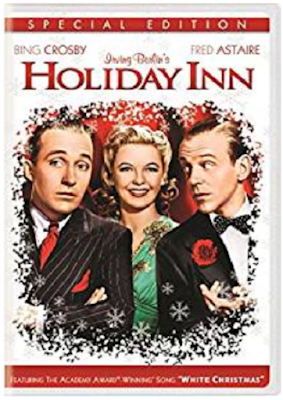 One song we all know and love is "White Christmas".  Because there is an actual movie named White Christmas (1954) that also features the Irving Berlin song, many people assume the song was written for that movie.  It was not.  The song, White Christmas sung by Bing Crosby, was first performed in Dec. 1941.  A few months later it was recorded and sold as part of the musical soundtrack for the movie Holiday Inn.

In my opinion, Holiday Inn is a better movie than White Christmas.  It is a real shame that so many people associate the song with the movie that bears the same title.  Sadly, they often miss the best!


The Plot of the Movie Holiday Inn


Fred Astaire, or should I say Ted Hanover, is a famous dancer who is part of a 3 person act.  Bing Crosby plays the part of Jim Hardy, a sensational crooner who is tired of show business.  He is engaged to Lila, the third person in the act.  Together they plan to leave the stage and "retire" to a life of leisure on a farm in Connecticut.  But, Ted has other schemes.

Holiday Inn (Special Edition)
Buy on DVD or Blu-rayTed loves show business and he likes his dance partner, Lila.  He is certainly not ready to lose her, so he tells her that he loves her and wants her to stay with him.  Lila chooses Ted and show business over Jim and the farm.  That is pretty heart-breaking for Jim, but at least he has his future at his farm ahead of him.

After nearly a year of isolation and working the farm, Jim finds it is not what he expected.   He dreams up an alternative that includes his beloved farm, but also allows him to take the stage again to preform.  By turning his farm into Holiday Inn, he can write his music and host shows on holidays only, which would be 15 shows per year.  He visits Ted to pitch his plans in hopes that Ted will join him.  Even though Ted is not interested in working at Holiday Inn, their manager does send Linda Mason to Connecticut to work when she recognizes him and asks for his help.

Linda proves to be the perfect song and dance partner for Jim and they officially open Holiday Inn for the first show on New Year's Eve.

Back in New York City, Lila has left Ted for a millionaire and Ted rushes to the Holiday Inn to commiserate with his friend, Jim.  When Ted dances with Linda, he "knows" he has found his new dance partner.  Jim fears history will repeat itself and that Linda will leave him for Ted and show business. 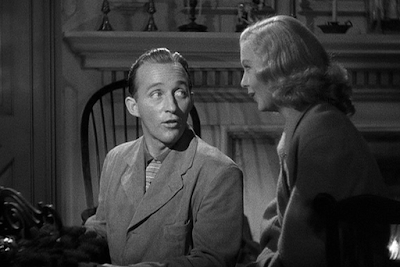 This romantic movie is pure entertainment!  The dancing is fabulous, the music is outstanding, and of course, Bing Crosby is sensational.  He truly was a gifted singer and actor.

By the way, you won't have any trouble recognizing the importance of the song "White Christmas" to Jim and Linda in the movie.

The song, "White Christmas" sung by Bing Crosby is the top selling single of all time.  You may find it interesting to know that the current day Holiday Inn hotels were inspired to name their hotel chain by this movie.

Note:  The movie cover art has been colorized, but the movie is black & white.