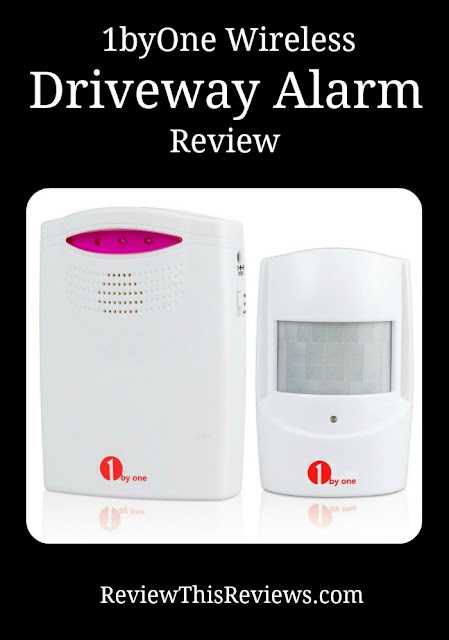 Give the Gift of Home Security for Less Than $20

A few years ago at Christmas, one of our thoughtful sons gave us the gift of a 1byone Wireless Driveway Alarm. Having lived here with us for most of his life, he was well aware that sometimes visitors made it all the way to the porch before we had any idea there was someone walking or even driving down our long, rather secluded driveway. What a great gift idea!

After using the alarm for just a short time, not only were we glad we had it, we knew that we never wanted to be without it. Let me tell you about this wireless driveway alarm that we still own, use every day, and highly recommend.

The brand name of the unit we own is 1byone (one by one) and the cost for the motion sensor detector and the receiver system is less than twenty dollars (currently $15.99 as I type this, price subject to change). Even adding the cost of the batteries needed to power the unit, the word "cheap" comes to mind, but I don't want to give you the idea that this is an inferior product as it certainly is not.

How Does the 1byone Wireless Driveway Alarm Work? 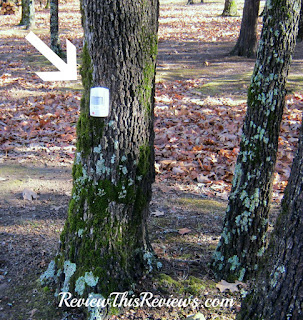 On the left is a photo of the weatherproof motion sensor with its passive-infrared (PIR) technology mounted on a tree partway down our long driveway. When a car comes down the driveway, the unit senses both a change in temperature and motion, the light on the unit flashes as it sends a signal to the receiver inside the house, and both the alarm and the light on our unit give us a signal that we should take a look outside to see who or what has set off the alarm. 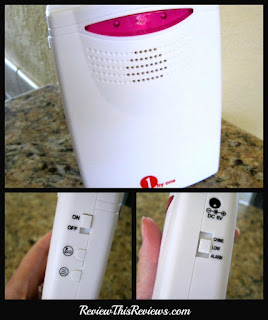 On the right are pictures of the receiver which we keep in a convenient spot on a counter where we can both see it and hear it. The unit is on and, as you can see in the photo on the bottom right, is set in the low volume chime mode. Trust me, "low" is plenty loud enough that we can hear it throughout our entire house. If we used the receiver outdoors, for instance if we moved it to the back porch while we were working in the garden, we might set it to make more noise. In some situations, we might turn off the audible signal altogether and just use the light.

In our situation, one sensor for the driveway and one receiver for the house are all we need. However, the device is expandable so that, if you have more than one driveway or area to cover, you can add on multiple sensors and/or receivers. One reviewer uses a set indoors, with the sensor in a child's bedroom and the receiver in the parents' room, so that they can tell if their toddler gets up during the night. Another reviewer uses a set by the back door so he'll know when the dogs are at the door, ready to come back in for the night. With some creative thinking, perhaps you'll come up with even more great ideas on where to set up your driveway alarm system even if you don't have a driveway!

How Long Will This Inexpensive Alarm System Last?


We received our driveway alarm three years ago and it worked perfectly until about six months ago when, thanks to squirrels (we think), the outside unit became undependable. Rather than replacing just the sensor, I simply ordered an entire new system. As for battery life, we have changed the batteries about once a year.

What About False Alarms From the Motion Detector?


Yes, we occasionally get false alarms. Our sensor is mounted on an oak tree and deer love to eat acorns, so recently, as the acorn crop was plentiful this year, visiting deer set off the alarm on a regular basis. We are aware that deer cross our driveway frequently, so we take that into consideration when checking outside after the alarm sounds. We occasionally notice squirrels in the area, too, and occasionally a neighborhood dog passes by. Neither set off the alarm often enough that we complain. An occasional false alarm from our wildlife neighbors is expected and we're fine with that.

Heat is another factor that affects the sensor and can cause false alarms. It is advised that you don't install the sensor in an area that gets direct sunlight, including near a window that absorbs heat that might set off the alarm.

Occasionally, on a particularly windy day, we turn off the alarm to avoid false alarms from blowing leaves or tree limbs. Living in a wooded area, that is just a factor we have to consider and work around.

Would You Buy This Driveway Alarm Again?


Overall, I'd rather have occasional false alarms than not have the driveway alarm. I've come to depend on it when expecting visitors and, especially, when unexpected visitors or delivery drivers arrive.

I like to know anytime someone is coming or going and since I can't watch outside all the time, and because our trusty watchdog isn't always on duty (lots of naps, you know), I am thankful that the 1byone Wireless Driveway Alarm is always on the job.

So yes, I would buy it again and I definitely recommend it to others who care about keeping themselves and their loved ones safe.

P.S. Just a reminder that a driveway alarm system would make a wonderful gift for someone whose safety you care about. This is one of the most thoughtful gifts we've ever received.