A Novel Gift for a Sudoku Fan 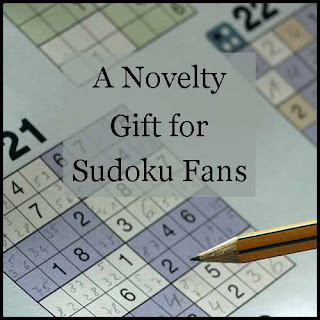 If you know someone who loves Sudoku (and don't we all have at least one person on that list?) then you're probably sick of buying them Sudoku books and no doubt they already have (or don't like) the electronic version of Sudoku.

Let's review other ideas for s Sudoku fan and there are a couple.  A gift that I thought looked really neat was one of the Sudoku mugs (mind you I always think a mug is a cool gift idea) that's available, but from experience these really don't seem to be appreciated as much as an actual puzzle book.

What is left?  Well there are some  Sudoku calendars which look really good.  I have debated getting these, but so many people just use their phones instead of a physical calendar  these days.

This leads me to another idea - something very unexpected and a very novel gag type of gift.

Now I have to be honest I can't claim credit for this gift idea, it comes with a little story.  My boss passed away a couple of months ago and we had to clean out his office and we came across some Sudoku toilet paper.

One of his friends called in as we were still sorting through things and noticed the toilet paper and told us that he'd given it to him as he loved to do Sudoku.  I immediately asked where I could get some as I thought it would be a great idea for my mother.

The paper seemed good quality and I personally think it makes a great gag gift, but also if you're going to be in the 'little room' for a while why not exercise your 'little grey cells' at the same time!

I give it a big thumbs up as a novel gift idea for a Sudoku fan and if you're a fan and on my Christmas list - surprise!  You're getting toilet paper.

The only question now is - can I find a toilet paper holder that has a pen/pencil holder attached because you just know that you'll forget your pen when you want to solve the puzzle and I don't think it's fair to try and do Sudoku in your head!

What do you think a great gift idea or not?

If you prefer Suduko books or you want to give one as well then Cynthia reviews one of her favorite (like her I prefer the pen and paper form of Suduko to the electronic ones and this book sounds awesome!)

If you're thinking wow that's a great idea, but I don't know anyone who likes Sudoku then you might be pleased to know that you can get all kinds of novelty toilet paper (who knew?) and what better gag gift for a work colleague or your best friend?


You can find lots of different gift ideas here at Review This from gifts for tea lovers, vegan teens, cat lovers, writers and more.  Be sure to check out our Holiday Gift Guide (by clicking the picture below) or just search gifts for lots of great ideas. 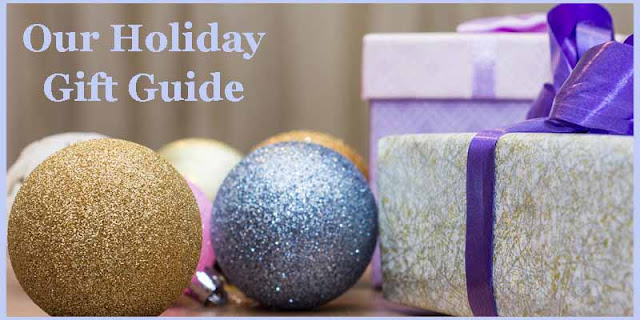 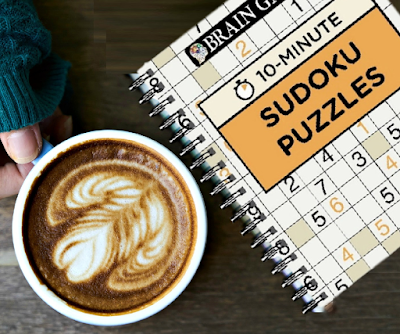 When I am stressed, anxious or just down-right bored, there is nothing like a Sudoku puzzle to help me focus and concentrate.   Finishing the puzzle gives me an inexplicable sense of accomplishment.

I first discovered Sudoku years ago in a restaurant that had paper place-mats with Sudoku puzzles printed on them.  I was intrigued and immediately started working the puzzle in front of me.   Then it became a race between my husband and myself to see which of us could finish our puzzle first.  There were times when that was just downright funny.  Now I ask you, do you really think I would erase a few numbers from his box while he was giving his order to the waitress?  You bet I did!   No, I wasn't cheating.   Pencils marks don't completely vanish just because they have been erased.  I did it to devil him.

The time waiting for our orders passed very quickly as we met our Sudoku challenge head on.  Actually, I recall several times when I was very annoyed to have my puzzle interrupted by the waitress trying to set down a plate of food.  Honestly, I think we continued to go to that restaurant more for the puzzles than for the food.

That restaurant went out of business long ago, but my love for Sudoku was here to stay.


Brain Games® 10 Minute Sudoku PuzzlesCheck PriceOne of my favorite gifts has to be a book of Sudoku puzzles.  When my mother discovered my obsession with Sudoku, my parents included a new book each year in my birthday and Christmas gifts.  Once I had a new book in my hands, the puzzles inside called to me.  It was often all I could do to stay present for the continued celebration when all I really wanted to do was slip off to a quiet place and work my Sudoku puzzles.

Sudoku puzzles are definitely available online.  I play those too.  But, I actually prefer the book, paper, and pencil form.  Again, this obsession and sense of accomplishment is fairly inexplicable.

What can I say, I like numbers, puzzles and a challenge!  However, you don't have to be a math genius (I assure you, I am not!) to love Sudoku.

My favorite style of book is one with a spiral binding.  That way I can fold they pages back and leave the book open to my puzzle in progress.  Life sometimes interrupts my play and I like to be able to easily get back where I left off.

I also take books with Sudoku puzzles when we are traveling.  When highway boredom sets in, I grab my book and pencil and get down to the business of solving my latest puzzle.  Sadly, I can't do that if I am driving.  It truly is best to not Sudoku and drive!