Review This! Curious George and the Man in the Yellow Hat

I don't know whether to say Happy Birthday or Happy Anniversary, because each one of them would be correct. Curious George is still looking really good and he's only 75 years old!

&
The original book started with George's capture in Africa by the man with the Yellow Hat. He takes George on a voyage to the 'Big City" where he will live in the zoo.

Much to George's dismay, zoo life was not for him and he escapes.  But George and the Man in the Yellow Hat (who never has a name) are reunited and thus begins all of George's adventures.

In 1947 George gets a job.  In 1952 he learns to ride a bike, in 1957 he get a medal and so his adventures are all about things that would interest and garner the attention of post war children.  Three more books would follow, George Flies a Kite (1958) Curious George Learns the Alphabet (1963) and Curious George goes to the Hospital (1966).  The years were full of changes and prosperity and relative peacefulness.  So the world as a whole was much more relaxed.  Stories of George and his antics were welcomed stories, read to children everywhere.

George and his "man in the yellow hat" are really almost like a father and son.  The man,  as he is referred to in many of the tales, takes George into situations where he will learn something new.  While the original Curious George was only made into 7 different stories, the publishing company adapted several of the Telefilm series into books edited by Margret Rey.  Most of these are out of print, but had been re-released with some new cover art. (For you collectors, keep your eyes open for these 1984-1993.)

A third series called the New Adventures of Curious George appeared in 1998, and still continues to the present day.  New illustrators continue the art work in the same vein as was started by Hans Rey. Children all over the world still seem to love Curious George.

Since his original release, Curious George stories have been made into  two  movie shorts.  He has been featured at water-parks, a Christmas film, and video games.  In 2010 Curious George was still being used for a live-action/computer-animated series.  Public Broadcasting Systems loves Curious George and you can still see him on their PBS channels.   To this day, there is still one toy store that carries everything "Curious George" and that is in Cambridge Mass.  If you get a chance, go for a visit, I'm sure that some childhood memories will be rekindled. 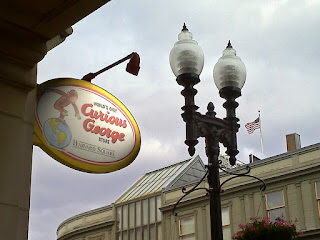