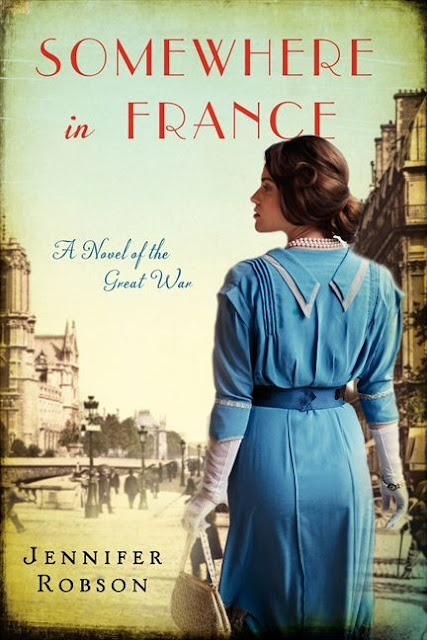 Somewhere in France: A Novel of the Great War by Jennifer Robson


I believe that I read more books set in the years surrounding the Second World War then I do set in the First World War so the time frame of Somewhere in France felt a little different to me when I first picked up the book and the claim that it would be “especially satisfying for fans of Downton Abbey” was somehow a little off-putting to me. Can anything compare to our beloved Downton Abbey?

However, somewhere in France delivered a solid story. As a matter of fact I just finished it moments ago after putting aside all of the other things that I should have been doing this morning and leaving my husband to cope with the mess in the kitchen on his own. Don’t worry, he was up to the task.

Somewhere in France is the story of Lady Ashford (Lilly), her brother the Viscount Ashford (Edward) and his best friend Robert Fraser (Robbie).

Lilly breaks with her wealthy family in order to do the work she wants to do in support of the Great War. She is not content to stay home, find a husband and raise a family so she learns how to drive and joins the Women’s Army Auxiliary Corps and becomes an ambulance driver.

Edward, who previously was not much more than a spoiled aristocrat, joins the war effort in the trenches where he finds success leading a group of men.

Robbie, who originally hailed from slums in Scotland but who managed via a scholarship to become a talented surgeon, is assigned to a field hospital where he serves as Captain Fraser.

They all keep up a stream of good, old-fashioned correspondence, which helps them maintain close ties. They continue to do so even after Miss Ashford, as Lilly calls herself after her break with her family, is assigned as an ambulance driver to the same field hospital that Robbie works at.

Somewhere in France is most definitely a love story though it takes a while for that love to be discovered and then years for it to be exposed.

WHAT TO BE AWARE OF IN THIS BOOK 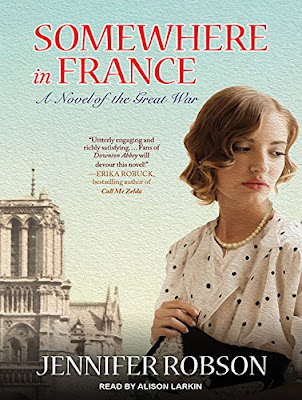 If you decide to read this book, you might like to know that there is a lengthy sex scene and that, of course, there is violence.

Since all three are working near the front lines in the Great War, it is inevitable that this story includes scenes from the injuries received by those fighting the war and those injuries and the resulting treatments were not nice for the patient or the professional who had to treat him.

You might not expect the fairly lengthy sex scene. However, I think that it was handled beautifully. It demonstrates how some women, particularly those in the upper class, were so protected from realities of life that they knew literally nothing about sexuality and reproduction.

There is some discussion on the website GoodReads about this very issue Some writers call the scene short, which I would not. Others comment about how it important the scene was for the relationship of two adult individuals who would have been married years before if not for the war and because of the historical facts it demonstrated about the lack of knowledge about procreation on the part of the main character and presumably other women of the era.  Lilly's partner was actually forced into the position of educating her on the topic. As one writer said, the scene is not anything like Fifty Shades of Grey. It is beautifully handled though perhaps longer than it needed to be. If this subject matter is of concern to you, you might like to read the discussion for yourself by visiting GoodReads.


Don’t let these things turn you off this book. Somewhere in France is definitely a page turner, a love story with drama and suspense and a look into the life of people who lived and worked directly on the battlefields during the Great War, the war to end all wars. It is HIGHLY RECOMMENDED by me. I have to say now that I agree with the comment on the cover that if you love Downton Abbey, you will enjoy this book. You can find your copy in whatever format you prefer on Amazon by clicking right here.

See you
At the bookstore!
Brenda