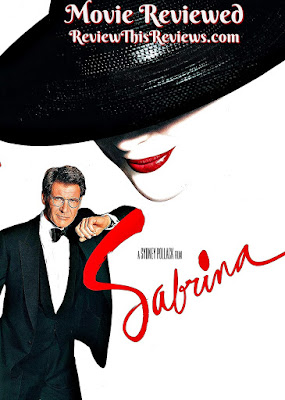 Sabrina is an older movie from the 50's that starred Audrey Hepburn and Humphrey Bogart that was remade in 1995.  The newer version starred Harrison Ford and Julia Ormond. Normally, I prefer the original, especially when actors like Bogart and Hepburn are in them.  However, with this particular movie, I actually prefer the '95 version.  Surprisingly, I felt Ford was more believable than Bogart in the part of Linus Larrabee.

The plot of the two movies is similar, but has some major differences aside from the actors.  In the 50's version, distraught by David's lack of interest, Sabrina attempts suicide, but is discovered by Linus before the deed is done.  In the 90's version, Sabrina loves David, but does not even consider suicide and simply leaves for a fashion internship in Paris.  I prefer the stronger woman who doesn't define herself totally by a man's interest, or lack thereof.

It is really hard to believe it has already been over 20 years since the Ford & Ormond version was released.  Whether you wish to go back 20 years, or 60 is up to you.  Either way, it is a great romantic movie!


Sabrina (1995)Check PriceThe Larrabees are an extremely wealthy family that consists of two sons and their widowed mother.  Linus is extremely serious and completely devoted to the success of the family business.  David is a playboy and is only interested in spending money and women.  They live in a huge house with pools, tennis courts and plenty of staff, including a chauffeur.

Sabrina Fairchild is the chauffeurs daughter who grew up "above the garage next door" to the Larrabee brothers.   Secretly, she had a huge crush on David, the younger brother all of her life.  Even as a young adult woman, Sabrina is still enamored with David in spite of his playboy, womanizing ways.

The movie opens with Sabrina, a young woman, climbing a tree to watch David and his latest conquest from afar.  Of course, she wishes she was the one dancing and laughing with David.  He may know who she is, but he is not the least bit interested in Sabrina.

In an attempt to help Sabrina, her father sends her to Paris for a few years to study fashion, to mature and hopefully to get over David.  When Sabrina returns home with a totally new look, she is still smitten with David.  Because of her new haircut, contacts, stylish clothes, and make-up, David doesn't recognize Sabrina and is immediately interested.  He invites her to attend his mother's birthday party that night and she accepts.  Linus, on the other hand, knows Sabrina immediately and is not the least bit happy about his brother's interest in her.

David is engaged to the daughter of the owner of Tyson Electronics, which is currently considering a merger with the Larrabee company.  Linus is not about to let David mess up their business deal by betraying Elizabeth Tyson while playing around with Sabrina.  Linus intentional sets out to distract Sabrina and pursues her romantically himself.

No one expects the outcome of the games these two brothers are playing, especially Sabrina.  It is truly a very sweet love story.