Review of The Steadfast Series by Nancy Moser

Not Your Typical Christian Fiction


When I was much younger, it was hard to find good Christian fiction. Grace Livingston Hill ( who wrote between 1877 and 1947) almost owned the Christian romance genre. Her books are still popular today, but many in younger generations find her books too old-fashioned. Today's Christian readers, however, have far more choices. Many excellent books now exist in the genres of Christian contemporary romance and Christian historical fiction. We also have Randy Singer's Christian legal thrillers to compete with John Grisham. And we have Nancy Moser's contemporary Christian fiction. 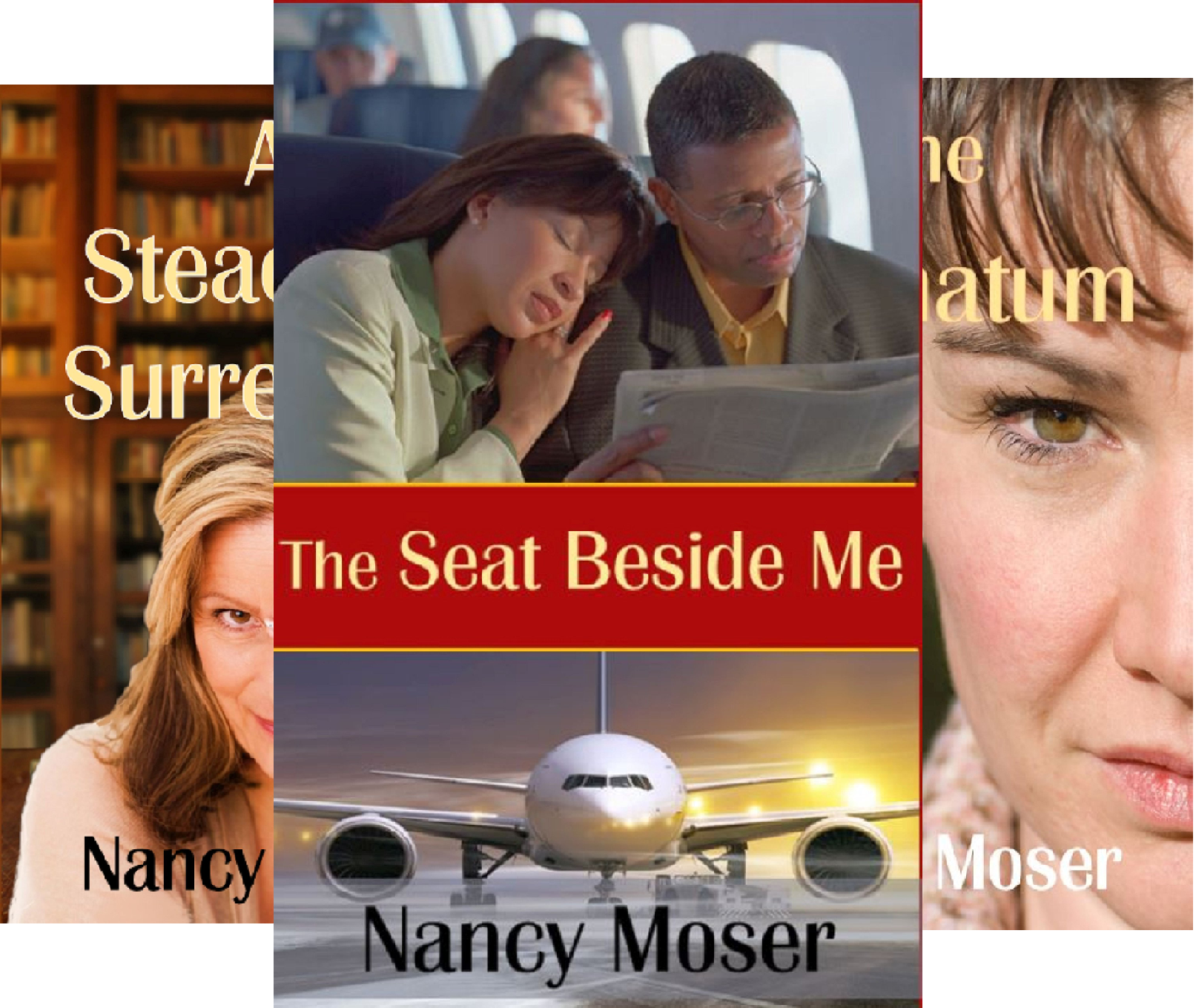 Amazon classifies The Steadfast Series as religious and inspirational, as well as mystery and suspense. In my opinion it lives up to both labels. I couldn't put the books down. After reading The Seat Beside Me I had to download the other two books in the series immediately. Warning: When I finish a book in this series, the end leaves me hanging. I always feel the book is not quite complete. But isn't real life also like that? We don't always know what's next.

The Theme of The Steadfast Series


The books in The Steadfast Series emphasize the importance of individual choices. God deals each of us a hand, but we choose how we play that hand. We humans make decisions that have consequences. Each chapter of the three books in this series is introduced by a short related portion of Scripture.

The Seat Beside Me


When you fly alone, do you wonder who will be sitting beside you on your trip? I do. So do the characters in The Seat Beside Me. They have made conscious choices leading up to their presence on Flight 1382 to Phoenix. We watch many of their choices as they board and discover their seatmates. We get to know six passengers very well. Sonja is a schemer who tricks her way onto Flight 1382. She wants to be one of the three from her company to attend a corporate conference in Phoenix and hopes her attendance will help her get a promotion. She uses information she overheard to betray her colleague who was supposed to go so that she could take her place. The seat next to her is filled by a handsome black man in a suit, Roscoe Moore, who immediately engages her in conversation.

Henry's job requires him to fly, but flying scares him. He is a Christian and you see him struggle with his fear as he takes his seat. He's not afraid to die, but hates the feeling of being completely out of control of his life while in the air. He sits in the aisle seat on one side of George (below).

George lost his beloved wife seven months ago. He is grieving and is going to Phoenix to commit suicide. He has one daughter. He has left money, a note, and important documents so that she can't miss them after he is gone. George is sitting between a widow in the window seat who won't leave him alone and Henry, who rescues him from her.

Merry has a husband and son. She is going to Phoenix to meet a single girlfriend and escape her family and responsibilities for a few days. Although she loves Lou and Justin and they love her, she is a discontented housewife and her marriage is going through a rough phase. Merry is not at all happy when Lou and Justin surprise her by boarding the plane, and joining her for the trip. No escape.

Anthony is an egotistical plastic surgeon. He is rude to everyone he meets as he prepares to board. He's a man with no real friends and the reader can easily see the reason why. The person who (in his opinion) overfills the seat next to him is an unattractive woman he immediately labels as "white trash." Even her substandard English offends him. She calls him a "rich la-di-da" and lets him know she hates doctors.

Tina is a high school English teacher who hates her job and doesn't like her students much, either. She is also a Christian. She is not happy to be seated next to a teenage girl who reminds her way too much of her students, but as she converses with Gayla she actually begins to like her.

Dora is a reporter who did not want to go to Phoenix. Then her mother called and begged her to come because she needed surgery and didn't want to be alone. So Dora got ready to make the trip. At the last minute her mother called and Dora didn't have to go after all because the doctor said her mother no longer needed the surgery. She is delighted to stay home.

Although the passengers are ready to go, a blizzard has closed the airport and delayed all flights in or out. Even after boarding, the plane is delayed on the tarmac for several hours because of snow and icy conditions. This delay gave the passengers a lot of time to get acquainted with their seatmates. The extra time of quiet and boredom made passengers more willing to open up with each other and have conversations that touched on important issues. As we listen in we learn what choices Tina, Sonja, George, Henry, Merry, and Anthony are contemplating. We also discern a lot about their problems and characters.

Finally the pilot tells the passengers that they will be taking off. The author does a good job of foreshadowing what will happen. Readers know the plane will crash.

We watch the passengers reactions as they begin to realize the plane is about to crash. Those who survive impact fight for their lives as the plane falls apart and they await rescue. We see the actions of the most selfless and the most selfish. None of the survivors will ever forget their experience in the icy water and the hospital. The memory of the horror and fear while waiting for the rescue helicopter stays with them. We watch  as the crash experience changes all of them. None can go back to exactly the lives they had before.

The crash, important as it is in the plot, is not the main focus of the book. It is the characters' catalyst for change. The focus is on the decisions the characters make after the crash and how those decisions affect their new lives and relationships. You will meet some of the characters in other books by Nancy Moser. One of them is the main character of the next book in the series.


In this second book in the series, crash survivor Merry, who lost her husband and son in the crash, tries to start over in the small town of Steadfast. Orphaned teen Sim runs away from her aunt and uncle guardians. Claire Adams, a famous mosaic artist, is challenged by a speaker at church to give away all her possessions in complete surrender to Christ. All three end up in the small town of Steadfast, Kansas. It is there they meet and begin to influence each other as their lives change. All three need to choose a future direction for their lives.

Much of this book is set in the public library where Merry is the librarian. I loved watching the antics of the regular library patrons and the library "ghost." Most of the characters in this book continue on to the next book in the series. In this book most of the focus is on Merry, Sim, and Claire.

This third book in the series has the most suspense. The main characters are restaurant owners, their employees, and their families. Readers will have met most of them before in A Steadfast Surrender. This book zeroes in on


As the book opens, Jered is running for his life. He has been on the streets for  three months. He had argued with his dad Bailey and Bailey had collapsed with a heart attack. Jered, afraid he might have killed his dad, grabbed a few clothes and fled in his truck. First he'd gone to Kansas City, but he found it too big and dangerous, so he drove to Eldora, which was much closer to home.

He had run out of money and was eating from the garbage. As he raids a dumpster in front of the Palamba Bar and Grill, Jinko, the owner, discovers him, offers him a job and gives him money to clean himself up and return to work for him. Jered accepts and Jinko offers him a place to live. He starts by washing dishes. He is eager for Jinko's acceptance. I won't say more about this because I don't want to spoil it.

Bailey is plotting to swindle Cal. Annie suspects it. But the marriage is in trouble because Annie recently became a Christian and Cal not only wants nothing to do with Jesus, but also resents Annie following Him. Annie has to be careful what she says.

Much of the plot revolves around the relationships of people and how they are trying to get ahead any way they can, escape or face their problems, and make important life choices.  Jered's dream is to be a musician but his father mocks that choice and wants Jered to work at Bon Vivant and take it over some day. Jered longs to feel important to his father and know his dad loves him. Annie wants Cal to become a Christian, but Cal wants to pull Annie away from Christ. Jinko wants to control and use Jered. Claire, Sim, Merry, and Susan play supporting roles in this drama as they help, encourage, and pray for others.

It takes a life and death situation to truly reveal the character of Cal, Annie, Jered, and Jinko. Personal choices brought each of them to play their part in this scene where it appears someone will die. Each reveals his character or lack of it in this scene. And each must endure the consequences of his own choices and those of the others.

What is the purpose of life? Where can we find the significance we humans crave? The characters in these books are looking for those answers. What does God really want from us? How do we follow him in today's world? What does it mean to be a Christian? Why do bad things happen to even good people? This book helps people think through the answers to these questions as they make their own choices.

See all book reviews on Review This!