Review of The Masterpiece by Francine Rivers 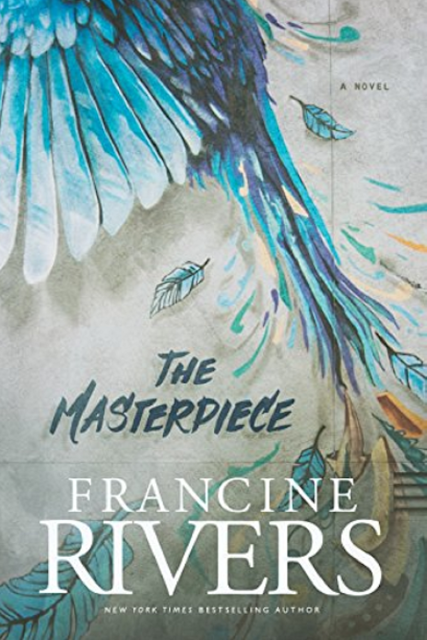 The Masterpiece is Francine River's most recently published book. Like all of her books, The Masterpiece isn't a typical cookie-cutter Christian fiction where everything is perfect after salvation. It is a story about people with very real issues in life.

Rivers doesn't write about fairy-tale versions of life as a Christian.  She writes about down to earth people who have been hurt or are struggling with life and in some cases, struggling with God.  Her books are not meant to malign Christians.  Rather to assure us that we are not alone and that it is not abnormal for a Christian to hurt, suffer, or even fail.

She also doesn't steer clear of difficult subjects like adultery, divorce, abortion, pregnancy outside of wedlock, prostitution, separation from loved ones, or even going to hell, quite literally.

For nearly two decades, Francine Rivers has been my favorite author.  Ever since I picked up her series, Mark of the Lion.  I have read and reread that series several times.  I originally purchased it in hardback since Kindles were nonexistent.  But, it was one of the first sets of books I added to my Kindle when one was gifted to me.

It may seem odd to you that I read some books several times.  I do that when I want to read something I know I will love.  It is like watching the same movie over and over again because it touches something deep inside of you.

Even though most of my current day book purchases are made in Kindle version, I collect Francine Rivers' books in hardback copies too.  I never want to be without them.

Plot of The Masterpiece by Francine Rivers

The MasterpieceCheck PriceWhen Grace Moore's father kills her mother and then commits suicide, Grace is found hiding in the closet.  Already she has seen and experienced too much for her young mind to comprehend.  She will be scared by the murder-suicide of her parents for the rest of her life.

Grace is sent to live with a grieving single aunt she does not know.  Aunt Elizabeth has no idea how to truly care for a 7 year old child, nor does she want to learn.  Every time she looks at Grace, she is reminded of the man that killed her beloved sister.  It doesn't help that Grace looks like him.

Having been raised in a loveless home, Grace doesn't really know or remember what love looks like.  It is no surprise that she ends up marrying a man who uses his charm to get what he wants from Grace, but who doesn't love her.  Because she believes her husband's education should come first, she drops out of college and goes to work full time to support them both and pay his tuition.  She is devastated when she comes home early from work one day and finds him with another woman.  Adulthood doesn't look anything like what she wanted, needed or expected.  She must get away and start over.  Even though she is a Christian, her problems are far from over.

Seeking to find love in all the wrong places, she leaves a bar with a man she just met.  The decision to cast caution to the wind will change her life forever.  She ends up being a single mother torn, trying to choose what is best for her child.  She had planned to give her baby up for adoption.  Now, she wants to keep him, but the parents she had chosen to adopt her child, still want him too.

Elsewhere, Roman Velasco is a wealthy artist who has lived under the shadow of evil his entire life.  He never knew his father, and his mother died of an overdose when he was a child.  Roman moved from one foster home to another where the parents either gave up on him, or only wanted the money for taking in a foster child.  He joined a gang just so he could have a place where he fit in.  Selling drugs did not appeal to him, but he found his niche within the gang by painting graffiti on buildings.  After he is caught and arrested, he is sent to Masterson Ranch.  An isolated ranch that makes running away impossible.   However, the Mastersons and his teacher encourage him to develop his artistic abilities.

As an adult, he changed his name from Bobby Ray Dean to Roman Velasco, and found a place where he, or at least his art, was wanted.  He became a workaholic and spent every day drawing or painting, often forgetting to eat.  He needed a personal assistant to take care of his daily tasks like grocery shopping, laundry, paying bills, answering the phone, etc.   Things a wife might do, if he had one.  But the last thing Roman wanted was a wife and he certainly did not want another personal assistant who wanted to be his wife or his girlfriend.

When Grace is sent by a temp agency to be Roman Velasco's personal assistant, she is not really impressed with him.  He is demanding, yet distant.  However, the distant part is much preferred by Grace.  So much so, that she ends up moving into the cottage on his property for convenience and going to work for him permanently.

You may think from the description above that you can guess what is going to happen and to some extent, you might be right.  However, expect the unexpected.  Grace is a Christian, but Roman is not, so it is hardly a relationship made in heaven.

It is what happens to Roman when he suffers a heart attack that I found most gripping.  I have heard people describe going to heaven when they die, or even seeing the white light, but reading River's description of what going to hell might look like, sent chills down my spine.  Frankly, it isn't as far fetched as I would like for it to be.

While this may not be my all-time favorite book by Francine Rivers, I would definitely recommend it.

Review of The Masterpiece by Francine Rivers Written by: