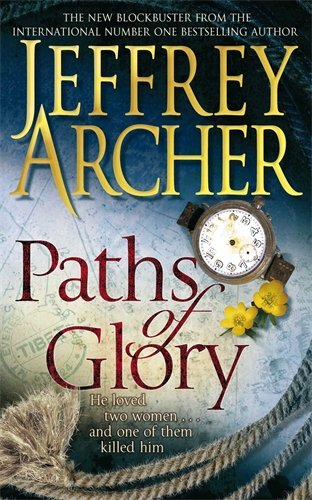 My first Jeffrey Archer novel, Paths of Glory, came highly recommended recently by my husband.  I asked him for a good book to read and he presented me with five or six choices from his own collection and this is the one that I chose.

Interestingly, this book recommendation came as I was working my way through my next book club assignment, Travels by Michael Crichton, which also includes a great deal of adventure travel and mountain climbing. Unfortunately, I was struggling with Travels, which though interesting is less of a novel and more of a series of short stories, so I set it aside and picked up Paths of Glory.

Paths of Glory turned out to be a real page turner. Set in the early 1900s in England and on various mountains, it details the life of George Mallory who was born to climb. From the youngest age, he climbed everything that he possibly could including a few things that he should not and it was also at a young age that he set his sights on conquering Mount Everest, an obsession that he lived with throughout his life and that eventually would cost him his life.

The story is a novel but is based on the true story of Mallory's life and his two loves, his wife Ruth and Mount Everest. A period drama, it is interesting and intriguing and of interest to even those of us who have no aspirations to climb a mountain.

George Mallory was a smart student though perhaps not studious. He studied history, served in World War 1 and eventually became a school teacher though he never gave up his obsession with mountain climbing. He was born in 1886 and lived until 1924 when he perished on Mount Everest.  It is still unclear whether he actually accomplished his goal and made it to the top and therefore, whether it is he or Sir Edmund Hillary who was the first to conquer Mount Everest. According to Wikipedia, this book was  or is somewhat controversial because of the fact that it challenges who conquered Mount Everest first and because of some factual errors.

I believe that Paths of Glory is a great read for anyone who likes a well done adventure story. A mystery story. A period drama. For world travellers who like adventure or for armchair travellers, who just like to read of adventures set in other parts of the world.

Yes, Paths of Glory is HIGHLY RECOMMENDED by me.  You can order your copy of the book in various formats from Amazon here.  I think the book begs to be made into a movie. However, according to Life Spectator, this book was being turned into a movie until another movie called Everest emerged and this one was shelved.

Have you read Paths of Glory? Are you interested? Would you like to climb a mountain or maybe you already have?

See you at the
top of the mountain!
(Well, maybe not but
definitely at the book store.)

Order your copy of Paths of Glory from Amazon.