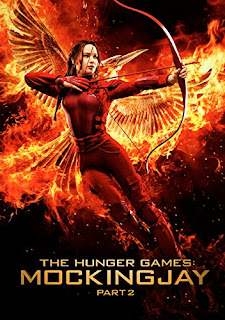 It will come as no surprise to any of you who have read my Hunger Games book review that I was in line for my ticket on opening day of The Hunger Games: Mockingjay Part 2 movie.   Since I had read the entire book series several times, there were no stunning revelations for me in the movie, but I wanted to be there nonetheless.  I sat in a packed theater with great anticipation, as if I didn't know what was about to happen.

If you haven't seen the previous movies, especially "Mockingjay Part 1", then this movie will be rather confusing.  It is not a stand alone movie.  Because there is no description or explanation at the beginning, a new viewer would be clueless about the sequence of events that lead up to the opening scenes much less the subsequent actions.

The movie started where The Hunger Games:  Mockingjay Part 1 ended.  The opening scene is a doctor checking the severity of the damage done to Katniss's throat and vocal cords during the attack by Peeta who nearly strangled her to death.  If you are familiar with the movie, you will remember that Katniss did not fight back when Peeta attacked because she knew that he had been tortured and somehow brainwashed by President Snow.  But now, she has an even stronger desire for revenge against the capital. Although Peeta recognizes the people around him, he has been so completely brainwashed that he truly believes Katniss was responsible for everything bad, including his families deaths.  Because he has been "programmed" to kill Katniss, he is placed in isolation where he will undergo medical attempts to reverse the psychological damage he has suffered.  Peeta doesn't remember that he loved Katniss so much that he willingly placed himself in harms way several times to protect her, or that she also protected him.

Katniss's troop of soldiers also include Gale and Finnick.  Much to everyone's surprise, President Coin decides to send Peeta to join their troop when the mission is well underway.  In addition to trying to carry out their objective, the team now finds themselves having to watch over Peeta, but they know the "real" Peeta, not the monster that Snow has created.  They truly desire to help Peeta overcome the demon in his head and try to help him discern what is real and what memories are not real.

One of the first tragedies of this movie is when Boggs is killed as they enter the capital city.  While he is dying, his last words are spoken directly to Katniss, "Don't trust them. Don't go back. Kill Peeta. Do what you came to do."   Katniss then assumes the leadership role of the troop and the members of the troop choose to follow her straight into the capital city and into harms way.  They each have their own score to settle with Snow and they are prepared to die in order to help Katniss achieve her goal.

That's it!  That is all I am going to tell you.  You absolutely must see the movie for yourself.


My Personal Note About The Hunger Games:  Mockingjay Part 2 Movie


I expected this to be my favorite of the movies.  By all rights, it should have been since it is the end to the actual Hunger Games and an end to President Snows "reign".  Plus, Katniss is finally able to lay down her bow of defense and start a life of her own choosing.  All those things happened, but there was such overwhelming sadness over the deaths of some of our favorite characters.  Of course, they died in the book too, but there is still something really different about seeing it happen on the big screen.

I also want to note, even though Haymitch, played by Woody Harrelson, did not join Katniss and the Star Squad on the mission to take the capital city, he is still very much a part of the movie.  Plutarch, the game maker, which was played by Philip Seymour Hoffman in his final role, was also featured in The Hunger Games:  Mockingjay Part 2.  Both Woody Harrelson and Philip Seymour Hoffman are exceptional actors who really brought personality and flair to their respective characters.

Even though Katniss, Peeta and Gale are the primary roles in The Hunger Games, the movies would not be as fabulous without the talents of all of the actors and actresses who made it a phenomenal success.  Each one became the face of the character from the book, and each one establishes a place in your heart just for them.  I might add too, that while we don't "love" him, Donald Sutherland did an outstanding job playing the role of President Snow.


The Movies You Should See Before You Watch The Hunger Games: Mockingjay Part 2

In all of The Hunger Games movies there were some differences from the book.  Some I did not like.  Some I did not think were improvements, but overall they did not harm the integrity of the story.  Still, I would have preferred it if they had not changed the origin of the Mockingjay pin and the character who helped Peeta initially in his recovery to regain his real memory.