A Guide to France and a Review of It...Well, More Like a Love Letter!

Why I Love France!

I'm traveling in Europe, and decided to spend a while in France. It's just as awesome as everyone says! Well not everyone thinks so, of course, and France has a reputation for being unkind to Americans, but my husband and I wonder why. Everywhere we go we are met with kindness and people go out of their way to help us.  This is a welcome change from our Italian experience!


Yes we loved Italy;  the ruins, the food, the art, the beauty, and everyone at all our hotels. But the average Italian on the street? Not so much. They all seem in a hurry, and not interested in helping anyone, let alone Americans who don't speak Italian. In fact they seem sort of angry.

If we hadn't had our guidebooks, and my Google translator app for my phone, I think we would have been lost a lot more than we were. (We were totally lost several times in Florence and walked miles out of our way!) They are sort of rude, even to each other. Just not what I expected at all.


Like I said, the people in hospitality are generally nice. But don't get me started on the people at the train stations! (The ticket office people I mean.) At restaurants they can be either really nice, or really snotty. It's a toss up!

We Love France Even More Than Italy!

But we love France! Everyone here seems generally happy and nice and they go out of their way to help, not just the hospitality people, everyone on the street. I had 4 different men try to help me with my luggage at the train station even when it meant they might miss their own train! And the station employees are also very nice and helpful.

Our train to Lyon broke down so it was unavailable; a train employee cheerfully informed us they would find a solution, and they did!  20 minutes later a bus arrived to take us to Lyon and he drove like a madman to get us to the station on time to make our connection. (We barely made it!)  We were not even able to get to our correct car or we would have missed the train.

I was worried after our Italian train experiences, but not to worry.  The French ticket agent just smiled and said no problem, you're on the train and that's what counts. So refreshing! All the people around us smiled and smiled. They even tried to talk to us and since I speak some French it was totally enjoyable.

So here we are in Toulouse which is sort of like a mini Paris. It's called the Pink city because many if not most of the buildings are constructed from pink bricks. And it's breathtakingly beautiful too.  Since it's Christmas time, there are lights everywhere, and everyone seems to be in a great mood.

But the difference between France and Italy  is that when French people hear us speaking English, they stop and tell us where to go for good food!  Ah, the French and their food. All I can say is the reputation is deserved. We love it!

Before we left the USA, I checked out several travel books, and after my research I decided that the Fodor's ones are not only tried and true, but they are the most helpful for the kind of traveling we are doing; we don't have a schedule or a plan other than to stay where we like the vibe, and move on after we're done exploring. So if you're going on a trip, I highly recommend the Fodor's guides! We are using this one: Fodor's France 2015 (Full-color Travel Guide). 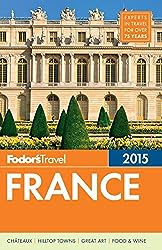 But there are older ones available too, and of course guides for any country you can imagine.  So far every recommendation has been totally helpful and thorough. I don't think you can go wrong using a Fodor's Travel guide!

For more stories and photos about my travels, follow my travel blog: Peace, Love, Travel Light!  More countries coming up! Do you have a favorite European country? Let me know, as we are open to seeing new ones!