March 17th St. Patrick's Day Some Facts and Fiction You May Not Know!

So Today is St. Patrick's Day and I hope you are sporting the wearing of something Green!  A Holiday Review.

So what do we know about St. Patrick and what is just added fun for all of us?

Truth be told St. Patrick was a 5th Century missionary from England, sent to bring the message of the Gospels to Ireland.  St. Patrick's Day is celebrated today because it was the day he died in circa 492 (no one is sure about the year). 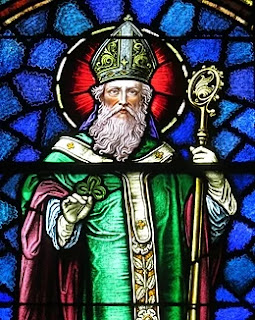 Stained Glass Window of St. Patrick from Junction City Ohio , found on Widipedia
Patrick's start in Ireland was not a pleasant one,  he was captured by Irish pirates and brought to Ireland as a slave.  He was about 16 years old at the time and not a particularly devout follower of the Christ.  His time as a slave in Ireland would lead him to find his faith as a Christian and from that point onwards he was quick to declare that Christianity and belief in God was the way to live.
Historians are not sure of too much regarding Patrick, as much of the written works that speak of him no longer exist.  The earliest writings seems to be a letter to Pope Boniface IV around the year 613.
So how do we have all these "symbols" that are used extensively to celebrate St. Patrick's Day today?
Patrick is credited with teaching the Irish about the Holy Trinity using the shamrock as a way to explain the ideology/theology of 3 unique persons in 1 God.  The pagan people in Ireland had many triple deities, so using the shamrock aided him in his evangelization efforts.
Patrick is also given the credit for ridding Ireland of it's snakes.  If you look at historical texts you will find that another Irish saint should have that credit(and even that is questionable).  It was only in the 13th century that credit seems to have shifted to St. Patrick.  In fact there evidence that Ireland never had snakes, so there was nothing for him to banish.
There is also the tale of his walking stick.  No doubt as he travelled, he used a staff or walking stick to aid his footsteps.  As he was moving from place to place in Ireland, he came to a place now known as Aspatria.  Legend has it that he stuck his walking stick into the ground and it took so long to teach the people here, that his stick had taken root by the time he was ready to move on.
What is certain is that there isn't a whole lot of St. Patrick's Story that can be held as truth, but the 300 churches and hundreds of thousands that were baptized by him helped make Ireland a Christian nation.
Today we are not so religious about St. Patrick's Day, rather we love to hang onto the "fun" side of Irish culture and traditions.  Because St. Patrick was given credit for using the Shamrock for teaching purposes, and its green, both of these became stalwarts of the Irish identity beyond the borders of Ireland proper.  One of Ireland's claims to fame is that it is the land of a thousand different shades of green!  If you have ever seen an picture of Ireland from the air, you will know that is true.
But let's have some fun now....Why do we wear green on St. Patrick's Day?
Well, this hails back to the belief in Leprechauns, which is said to come from some of the Druid folklore (pre St. Patrick).  These Leprechauns were: little people, with magical powers that could serve both good and evil. The Celtic folktales, told of  their trickery that would keep their much fabled treasures safe.  It is also said that the wearing of the green is directly related to these little creatures in that they are not able to see the color green.  Therefore you were safe from their trickery if you wore the green!

Everyone seems to be wearing green with sayings like "Kiss me I'm Irish!"  In past years, when there isn't a pandemic to keep us away, there were parades and music marking St. Patrick's Day.  The first St. Patrick's Day parade according to History.com was held in New York City in 1895. (There is a debate that there may have been a St. Patrick's Day Parade held in St. Augustine, Florida earlier than 1895) No doubt many Irish immigrants (who came during the potato famine in Ireland 1845) were the inspiration for this reveling  of cultural identity in their new home.  It was a balm to them to celebrate their heritage even though time were tough and not everyone welcomed the Irish. 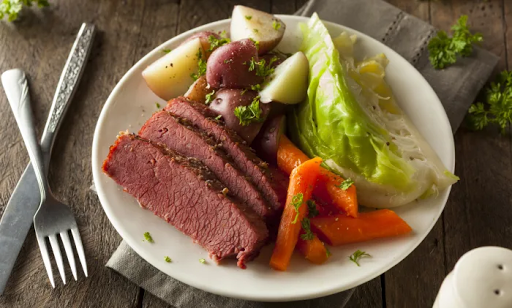 While we think of corned beef and cabbage as being a typical Irish Dinner, the truth is that in Ireland they will have Ham and Cabbage. When the Irish came to America, many were very poor so they substituted Corned beef for the Ham (it was cheaper).  Today, this is a staple meal to serve for St. Patrick's Day Dinner.
As with many things in North America, we have made St. Patrick's Day our own.  We can see people enjoying green beer or drinking the traditional Guinness while enjoying Irish step dancers and marching bands.
Chicago even dyes their river green in honor of St. Patrick's Day.  Now that is a clever trick worthy of any leprechauns in the city.
St. Patrick's Day has become a day not just for the Irish, but for anyone who loves a good time, a great party and a reason to celebrate.  You don't have to be Irish to enjoy all the sights and sounds of a wonderful day that just happens to come on March 17th. 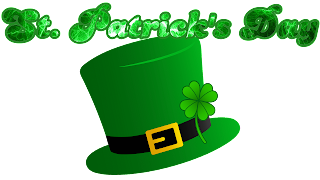 After a long winter, it's nice to have something "Green" to celebrate.  Wear your Shamrocks and Green with pride and have a Happy St. Patrick's Day!
Some lovely items for your home to help you celebrate everything Irish.