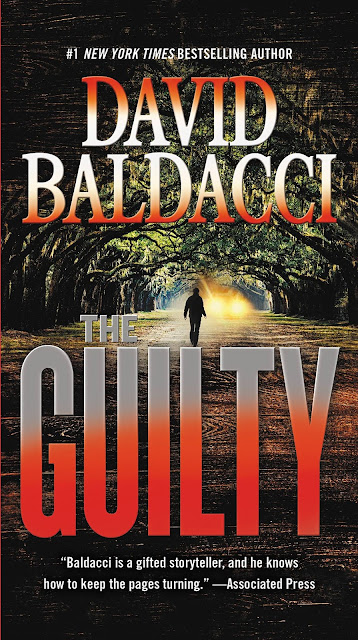 In The Guilty, David Baldacci takes you on a non-stop, action packed adventure in Cantrell, Mississippi.

When a top ranked government assassin is unable to perform his job, he heads home to deal with unresolved issues from his past and winds up embroiled in his father's murder investigation.

Making matters more difficult is the fact that he has been estranged from his father for 20 years. Talking to his father is no easier now than it was when he was a lad and his father's life being on the line does not seem to make a difference. His father wants no help from his son and is resigned to his own personal situation.

Robie, however, refuses to let his father take the murder charge without fighting back. His efforts, combined with those of an equally skilled coworker, to save his dad eventually help him start a proper relationship with his father. Better late than never, as they say. It turns out that his book is about murder and about family.

I was amazed at the action that took place in the first half of the book, which meant that there was lots more still to come. It was fast paced and hard to put down.

Yes, The Guilty is HIGHLY RECOMMENDED by me. Read more about it or order your copy from Amazon by clicking right here.

As it turns out, The Guilty is number four in a series called Will Robie and David Baldacci has written many other books, which I look forward to checking out. It is always great to find a new author that you enjoy and if all of Baldacci's books are as good as this one, I will have some more sleep deprived nights ahead.

See you
At the bookstore!
Brenda
Treasures By Brenda