Let me start by saying, I'm not a gardening expert.

What you'll find here is something I tried from an online search on how to bring English Ivy back to life … and it sounded too simple, but it freaking worked!

I can't guarantee you'll have as much luck as I did, but considering how easy it was, perhaps you'll be able to restore your Ivy as well? It's worth a try.

I've included a couple of videos, both taken just recently in 2018: One shows the disaster that our Ivy became this year, along with patchy, blotchy lawn.

The other video shows the results of new lawn growth and Ivy growth after using the two products indicated below.

BEFORE: Take a Look at the Disaster of our Ivy this Year. You'll also see the Lawn before the Repairs. What a Mess!


What Killed the Ivy You Ask?

The Ivy that surrounds our back patio has been there, without ever dying, since we had the patio installed in the early 1990s. I've NEVER had to repair it. The Ivy has always been a reliable patio ground-cover support.

We chose Ivy because it's maintenance free and has been so until this year, 2018.

So what took the life out of our Ivy? It could have been the harsh winter we just had, but I doubt that as we've had many harsh winters over the past twenty plus years. Or it could have been dog urine. We recently had a lovely dog visitor over the winter and he enjoyed choosing the Ivy to do his business on. Quite frankly, we suspect it was the doggie urine.

What Did We Do to Repair the Ivy?

The big secret was Miracle Grow. Honestly our Ivy was so bad that I really didn't expect it to work. After searching online for what to use to revive the Ivy, the most consistent response Google kept kicking back was 'Miracle Grow'. So I gave in, and tried it.

AFTER: Take a Look at the Ivy and Lawn After the Repair was Done this Year!

There's a Few HOWEVERS Though

1. However, as mentioned above, each year I repair our lawn with Scotts EZseed Patch and Repair. Scotts EZ is a combination of Mulch, Seed and Fertilizer.

Every year I buy several large bags and spread it along the perimeter of our cedar trees and on the dry dead patches of our lawn.

The cedar trees suck the life out of our lawn, so after replacing our lawn three times over the past several decades, I decided to consistently repair it year after year instead. Best decision.

Also, I  did try another brand of Lawn Repair and Scotts was far superior.

The reason I mention the Lawn repair is because who knows whether the fertilizer in it somehow enhanced the Miracle Grow on the Ivy. Not being a gardener, I have no idea, but thought you should know.

2. That's not the only fertilizer in our yard. Each year I also put 36 Tree Fertilizer Spikes in the ground around the cedars. You can read about how awesome that works for the trees here.

So in summary, our annual routine is normally tree fertilizer spikes and Scotts EZSeed Repair for the lawn, but this year's disaster with the Ivy called for Miracle Grow to repair it, and it worked!

Here's What the Ivy Looked Liked Last Year and Every Year Before that - Before the 'Dead Ivy' Crisis of 2018. 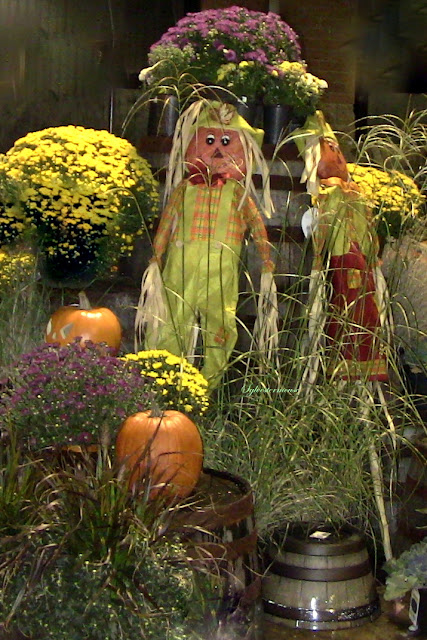 As the weather starts to cool down and the leaves start to change colors, everything appears to be gradually preparing for a long winter's sleep.  While the fall colors are beautiful, our yards don't seem quite as vibrant and colorful as they have been.  We desire a way to hold on to the beautiful summer flowers and green lawns, but to still embrace the gorgeous fall changes.  Some of us have found the perfect solution.

It isn't time to really start decorating for Halloween, but we can start decorating our yards for fall in a way that will compliment the Halloween decor when it is time.  Plus, thanks to the milder weather, we can leave these fall displays intact until Thanksgiving.  By creating a beautiful fall harvest display in our yards or on our porch, we capture the brilliance of flowers and combine it with the great harvest fest.  Some of the vegetables or flowers may have to be replaced over the course of the next few months, but the backdrops and foundations can easily remain.

Start by choosing a beautiful setting in front of a tree with the dramatic fall color leaves, like a maple tree.  Or, build your display on your front porch where it will be better protected from weather.

Foundations for a Fall Harvest Display


As with any creation, a strong, firm foundation will ensure the longevity of your fall yard display.   There are a variety of of items that are easy to obtain, or perhaps that you already have on hand, that make the perfect display base or foundation.


Note:  The featured hay bales are PVC Hay Bales made for decorative purposes.  If you build your fall display with real hay, you can later use the hay to mulch your flower or vegetable garden, to prevent soil erosion, or to protect and cover seeds. 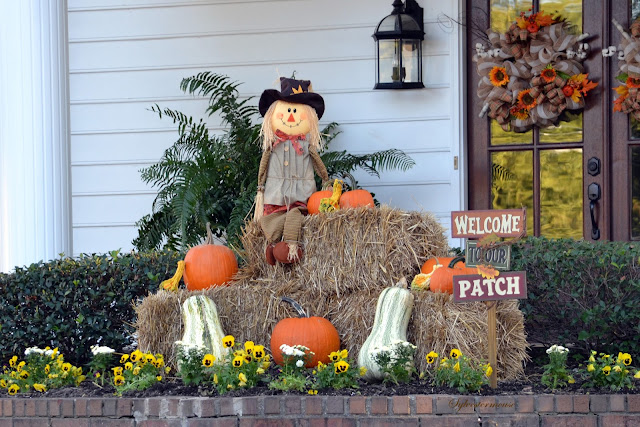 
5' Scarecrow Fall Harvest Halloween DecorationCheck Price
Once we have our foundation in place, we can start adding the fun, decorative items that we have chosen.  I usually add my main feature next which is most often an owl or a happy scarecrow.  You can always make your own scarecrow by stuffing old clothes with straw, creating a face or mask, and topping him off with an old hat.  Or, you can purchase a ready made scarecrow.


If you build your display on your porch, you could even make a fall wreath for your front door that coordinates with your display.

Check Out More Fall Reviews  Here
on Review This Reviews!

"How to Create a Beautiful Fall Harvest Display for Your Yard or Porch Written by: