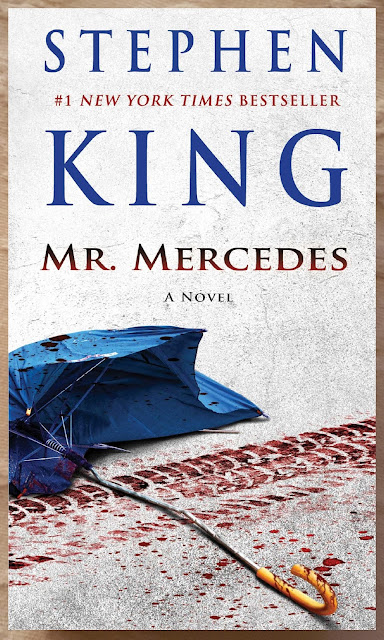 It’s been literally decades since I read a Stephen King novel. I believe that the last one that I read was Misery in 1987, before my grown up children were born. That book was simply too horrible for me. Later, for whatever reason, I watched or tried to watch the movie version of that story and that cinched the deal for me. I have not read a Stephen King book since then and not seen many of his movies either.

That is, until the 2014 book Mr. Mercedes was chosen this year as one of the reads for our book club. Now I am wondering what I have missed in all of the books since 1987 as I thoroughly enjoyed Mr. Mercedes. It was not too horror-ible at all though horrible things do happen in the book. However, it is a fast paced crime or detective story rather than a horror story. It is riveting; another book that I could not put down. A race-against-time thriller.

It is very well written with well-developed characters that include a retired police detective and a psychopath.

The police detective is not enjoying his retirement and is pulled back into one of his last, unsolved cases, that of the Mercedes killer.

The psychopath is, as The Globe and Mail says, “one of King’s great creations, twisted and deranged, but cringingly human.” On the outside, he is ordinary and could be one of your neighbours. However, on the inside he has many issues.

What results when the detective and the psychopath collide is a riveting story with two men ‘fighting’ to the end.

Mr. Mercedes is HIGHLY RECOMMENDED by me and by the Globe and Mail, too, LOL.

It is exciting that I just discovered that Mr. Mercedes is a trilogy so I (we) have two more books to read in the series, including Finders Keepers and End of Watch. I only hope that they live up to Mr. Mercedes.

There is also an AT&T Original mini series that has just started as I write this in August, 2017. I watched the trailer just now on Youtube and cannot decide if I will be watching the program or not. I have prematurely made up my mind that it cannot live up to the excellent book but I will be waiting to see what people think of the mini-series. As always, I recommend reading the book first.

You can learn more about Mr. Mercedes or order your copy of the book from Amazon by clicking here.

According to Wikipedia, Mr. Mercedes is King’s 62nd novel, though only 44 feature his name. He says that this book is based on a real incident in which a woman drove her car into a McDonald’s restaurant.

Will you be reading Mr. Mercedes?

See you at
the book store!
Brenda

Buy your copy of Stephen King’s Mr. Mercedes from Amazon.