I Know This Much: From Soho to Spandau

Let's review 'I Know This Much: From Soho to Spandau', an autobiography of Gary Kemp, lead guitarist, song writer and heartthrob of 80s New Romantic band Spandau Ballet.

If you just want to know who the song True was written for then this is the book to read! "Why do I find it hard to write the next line?" because you're tongue tied in love Gary! Who to? Well trust me this book reveals all which could be why Gary has used a line from his mega hit as the book title - I Know This Much.

If you're not interested in the song, but want to reminisce about the 80s and the New Romantics especially then you'll love to read this memoir from Spandau Ballet's Gary Kemp. Gary Kemp has a knack with words and I found myself laughing as he described the first time he saw a wok and cringing when he mentioned certain fashions.

Towards the end of Gary Kemp's autobiography I found myself in tears - his writing of a particularly sad event was so good I could feel the emotion jumping off the page at me.

I Know This Much: From Soho to Spandau by Gary Kemp
Confession time - I'm a huge Spandau Ballet fan and I thought I had quite a lot of knowledge about them and the beginnings of the New Romantic moviement. Even with this background I learnt a lot from Gary Kemp's Memoirs

I Know This Much is definately a book that brings back memories of names that you'd forgotten about. I loved the trip down memory lane.

Gary Kemp is also quite brutal about himself and some of his actions - it's a no holds barred autobiography from trying to murder his brother (anyone with a younger sibling can probably relate to that!) to being a total snob and a control freak.

The book also contains a few pages of photos which also help take you back in time - oh the fashions!


Who Was True Written For?


Spandau Ballet's worldwide hit ballad True really was the love song of the 80s, but who was it actually written for? I had heard Gary Kemp say that he had written True for a girl who never realized how he felt. I've never known who he was talking about until I read the book where all is revealed. I won't ruin it for you here, you can read the book instead!

From Islington to Highgate

Gary Kemp's I Know This Much Autobiography


I Know This Much by Gary Kemp starts off with his very working class East End upbringing and an unwanted Christmas gift - a guitar. It continues through his chid acting and early foray into music before moving onto the Blitz Kids and Spandau Ballet. The story of Gary Kemp's own contribution towards the break-up of the first New Romantic band is told in blunt honesty.

Gary's life past Spandau Ballet, the reformation and the death of his parents are all dealt with extremely well. if Gary Kemp ever decided to write fiction I think he would be consistently on the bestseller list.

There were so many lines in this book that stuck with me, but this was my first laugh out loud line as it struck me that back then a wok wouldn't have been something I knew about either. We tend to forget that things we use so often and can be found in many homes around the world were an unusual thing to have in your English home back in the 70s and early 80s.

Gary Kemp Reads Excerpts from I Know This Much


Other members of the band have also written their autobiographies. Martin Kemp (Gary's younger brother) was the bass guitarist for the group and was the first to write his autobiography.....

True: The Autobiography of Martin Kemp
Martin Kemp's autobiography was called True and was written after he survived two brain tumours.

The book was written in part as therapy for himself and also because he wanted to write something for his children who were babies when he was first diagnosed with brain tumours.

To Cut a Long Story Short: My Autobiography
Tony Hadley was Spandau Ballet's lead singer and the next member to write his autobiography.

Tony choose to use a different song title for his autobiography - To Cut A Long Story Short.

Gary Kemp was Spandau Ballet's lead guitarist and songwriter and is the latest one of them to write an autobiography which is what I have just reviewed for you.

Let me know what you thought of the book, did you cry near the end like me, or are you made of sterner stuff? 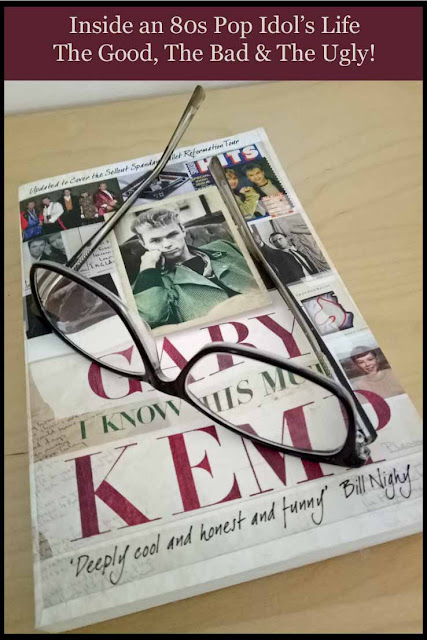 Spandau Ballet had five members in total which means that two stories have yet to be told. John Keeble and Steve Norman let me know when you've started your memoirs and I'll be more than happy to read them!