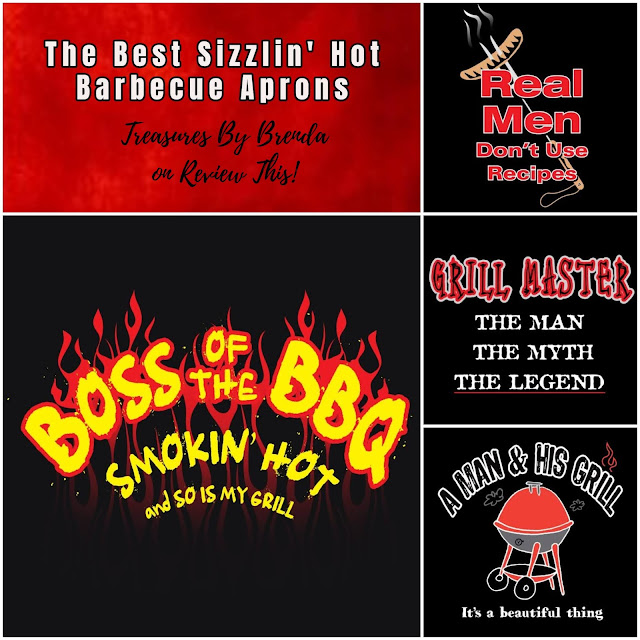 Grilling Something on the barbecue? Put on an apron first! It is summertime and the living is easy. Great weather, good music and your trusty friend, the barbecue, will help you prepare good food but before you throw your meat on the grill you might want to throw on a fun, spirited and practical grilling-themed apron. Here I review six. That is, six sizzlin' hot BBQ aprons. Six of the best. 'Cause only the best will do for you! 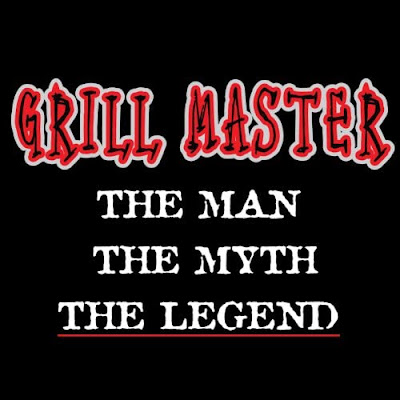 This grilling apron by Attitude Apron is a one-size-fits-all (which is usually the case) apron made of a polyester blend perfect for cooking and grilling.  One reviewer said, "We gave this and a grilling cookbook as a gift to my father-in-law and he loved it! The apron is just as pictured and was a perfect fit for my 5'9" father-in-law."  Find the Grill Master apron here on Amazon. 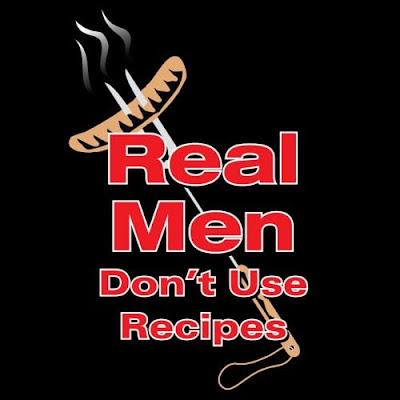 This Real Men Don't Use Recipes apron is another one-size-fits-all apron. It is made in the United States from a polyester blend, perfect for cooking and grilling. Perfect for any man who likes to ad-lib as he cooks. Find the Real Men apron here on Amazon.

A MAN AND HIS GRILL 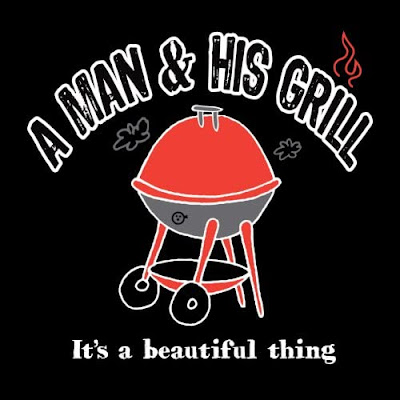 This a man and his grill BBQ apron is a 65 percent polyester, 35 percent cotton blend and features an adjustable neck and back ties. Just throw it in the washing machine after those big grilling events! "We bought this for my brother in law's birthday (along with grill utensils) and he loved it." Find the A Man and His Grill apron on Amazon here.

BOSS OF THE BBQ 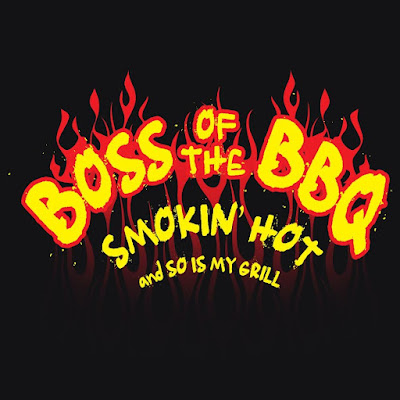 This Boss of the BBQ - Smokin' Hot and So Is My Grill apron, is yet another black, one-size-fits-most apron that will delight any man who is in charge of the BBQ...or who is just plain hot, LOL. Find the Boss of the BBQ apron here on Amazon.

WHO REALLY IS THE KING OF THE GRILL?

This video will leave you smiling. It captures barbecuing stereotypes, whether they are true at your house or not. At our house, my husband cannot take a book out with him when he tends the grill because that only leads to disaster. The lesson we have learned the hard way is don't get between a Little and his or her reading material even if food is involved.

KING OF THE GRILL 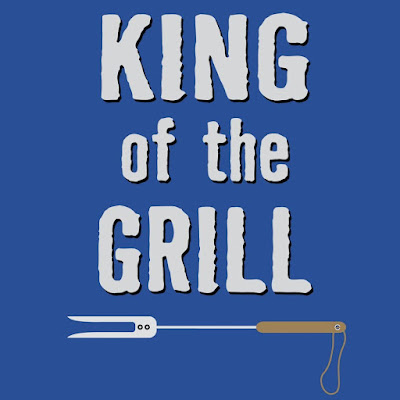 Do You Know Someone Who Is The King of the Grill? They should definitely have their own King of the Grill Apron! Also made of a polyester blend, it is perfect for all of the king's cooking and grilling! This is an apron with attitude, making grilling even more fun! Order your King of the Grill apron from Amazon here.

Are you loving your barbecue? How about these barbecue aprons? And for interest sake, who Is The King of the Grill At YOUR House?

Tie one on!
Brenda
MORE APRON READING:
How to Make an Apron resource page.
The Apron Book by EllynAnne Geisel reviewed.
Discover a life time of wisdom, memories and recipes from the Great Depression.
Find a fun cookie-themed apron here.
Check out the aprons in my eBay store.

Anniversary Gifts For Him Reviewed

My husband and I are about to celebrate our 20th Anniversary so I have been looking for gifts for him and I thought I would share some of the finds with you today. Although the ones that I sought out were for a specific milestone, most of these anniversary gifts would work for any year.

I don't know about your special sweetie but mine is rather difficult to buy for. If he sees something that he wants, he just goes out and buys it. If you ask him for ideas, he says that a gift card is just fine. Well, dang it; gift cards are not much fun to give! Sure, they are practical and the person can spend them on whatever they want but there just isn't any excitement in the entire process. Since a couple doesn't celebrate a milestone of 20 years but once; I want to give him something better than a gift card. I plan to give him several small gifts instead of one big one.

One gift idea that I think he will really appreciate is a new wallet. Now, hold on! I saw you roll your eyes! This isn't just any wallet, it has an inscription on it that I think will make him smile and think of me every time he takes it out.

Anniversary Wallet for him

We both enjoy watching the birds in our back yard. He likes to sit in the chair at our table that looks out at your yard. So I found a terrific coffee mug that he can use in the morning while he drinks his coffee and eats his breakfast. I chose one that says "Sharing the nest for 20 years." I won't show you a picture of it because they are just about sold out of that one. There were several options for an anniversary sentiment if it is something that you would like to give to your dear hubby. Getting a mug might seem a rather silly choice but in this case it fits with the tradition of the 20th anniversary being the year for giving china as a gift.

My sweet man wears a lot of t-shirts so I found one that fits our anniversary for him to wear. It has the sentiment of "Cruising together for 20 years". We don't go on ship cruises but we have cruised through life together quite happily. We used to cruise down the back roads just enjoying the ride and each other so that shirt just seemed to fit. I am sure you could find one that fits your marriage, too.

I'm still shopping around because my thought is that I will give him 20 gifts to open on our anniversary. There are so many things that I think will say, "I love you" in both romantic and humorous ways. I do like to pick whimsical things for him because that is one of the things that brought us together and has held us together; laughter. He has always made me laugh even when we were kids in school. Before we started dating, he came to me as a friend to help me heal from the loss of my first husband. He was so very sweet (still is!) in offering his shoulder for me to cry on. He made sure to tell me a joke or a funny story every time he called or stopped by. He still tells me jokes and funny stories and I still laugh. It is one of the many things that I love about him; his sense of humor.

In my search, I have found some key chains and different items that have anniversary sentiments on them that I think you will find easily too. Personally, most of those 20 gifts that I will give him are not necessarily traditional gifts for an anniversary. Instead, they will be little things that I know he likes. Something silly like his favorite candy bar. Think about that, when I give him his favorite it tells him that I know him well enough that I know that it is his favorite. To me something like that screams "I love you" even more than the words do. I know when he comes home grinning and hands me my favorite chocolate treat that it is yet another way that he is telling me that I am still the love of his life. He doesn't need to say the words at that point. I know because he obviously thought of me and wanted to make me smile.

So, I guess my point is that when it comes to finding anniversary gifts for him that it doesn't have to be something one might think of as a traditional gift. It honestly, doesn't even have to be something that you purchase. Perhaps fixing him his most favorite meal is something he will find very romantic because you made it for him and knew that it was his favorite. I think that it becomes easier when you think of your man and why you fell for him and still fall for him and know what will make him happy.