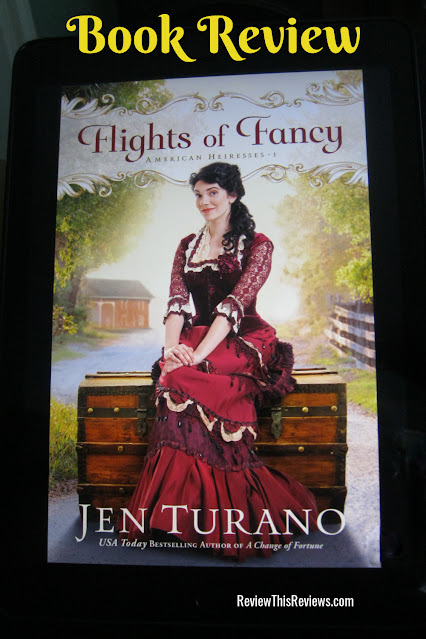 I truly enjoyed reading the entire American Heiresses series by Jen Turano.  Each book has been equally enchanting, humorous at times, and a delightful read.

Book 1 of the series, Flights of Fancy, is a wonderful beginning for a great series. It introduces us to Miss Isadora Delafield, who finds herself being pushed into an undesirable relationship with a duke from Europe simply because her mother desires a "titled" son-in-law.  Being a member of New York's Four Hundred isn't enough for Hester Delafield. She wants her daughter to be a duchess!  Never mind the duke is twice her daughter's age and is a widower multiple times.

When we think of wealthy heiresses, we assume their lives are easy, perhaps even enviable.  However, when you really sit back and think about how difficult it would be to know if someone was interested in you or in your money, it doesn't seem quite as enchanting.  Place the heiress in historical times when a husband controlled everything, including the heiresses inheritance, then the whole idea becomes downright dismal.

Hester Delafield may be thrilled that the Duke of Montrose has taken a special interest in her daughter, but Isadora is not.  Something about the duke makes her skin crawl and Izzie is rather disgusted by the lecherous fiend. Plus, he makes no secret of the fact that he is seeking a 4th wife who will hopefully succeed where the others have failed.  In his words, he is "in desperate need of an heir and a spare".  Not exactly a courting phrase that makes a young girl swoon, especially when delivered by a creepy old man.

Flights of Fancy
(American Heiresses Book #1)Check PriceWhen Izzie's butler reveals his own concern for her safety based on what he has learned from the duke's previous staff, he helps her run away.  He even writes her a letter of recommendation so she can get a job in a household and hide out in domestic service.  After all, who would search for a heiress among the staff of a household in another city.

All the fun and laughter for the reader begins when Izzie arrives at a farm in rural Pennsylvania, answering a newspaper ad for a housekeeper.  There is no way anyone would look for her in a home with two elderly people, 3 children, several cows, goats, chickens and ranch hands.  It is the perfect hideaway!  However, she is totally clueless on how to cook, clean, or care for any of them, which makes her less than perfect for them.  Or does it?

If you are seeking an easy read that will leave you cheering at the end, then I highly recommend "Flights of Fancy". 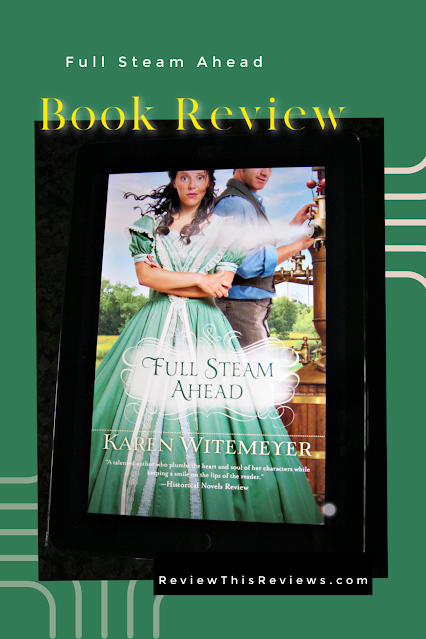 Sometimes you pick up a book and know you are going to love the plot from the very beginning.  That was the case for me with Full Steam Ahead by Karen Witemeyer.

I want to start this review by saying that I don't think the cover does this book justice.  It looks too whimsical in my opinion for a story that is not silly or juvenile.  I almost didn't read this book because of the cover image, but since I am familiar with the author, I trust her to provide an excellent story.  I am really glad I ignored my first impression based on the picture and read the book.  Frankly, I was rather sorry when it ended and I found out there isn't a second book to continue their story.

The book is set in 1851, but begins with a prologue that is essential to the plot.  It is about a catastrophic event in 1849 that changes the course of Darius Thornton's life which puts him right in the path of Nicole Renard, who is also experiencing unexpected life changes.

You can read the entire prologue by clicking here and opening the "look inside" tab at the top of the book image.

Full Steam AheadNicole Renard is summoned home before the end of the school year due to her father's deteriorating health.  When thieves break into their home and threaten her parents, an unusual plan is made to secure the family's future and fortune.

Nicole's father needs an heir for his business.  While his beloved daughter is smart enough to run his business, she is not a man.  Therefore, he needs her to get married before he dies.  Since he previously agreed to allow her to choose her own husband, an arranged marriage is out of the question.  However, he believes if he sends her to New Orleans, she can choose a husband from his business acquaintances and their sons.  After all, it is preferred that she marry someone knowledgeable about the shipping business since he will not have time to teach them.

Because they know the brothers who broke into their home, they want to secretly get Nicole on a ship bound for New Orleans. However, when they discover the men are watching the docks, Nicole leaves her luggage behind and jumps on a boat headed to Liberty using an assumed name.  She believes she can book passage to New Orleans once she arrives in Liberty.  However, once she is there, she realizes she doesn't have money for a ticket to New Orleans.  Therefore, she needs a temporary job and is eventually hired as a secretary by Darius Thornton, a man who the whole town believes is quite mad because he has spent the last year blowing things up.

Casting all caution and warnings aside, Nicole moves full steam ahead!

Full Steam Ahead by Karen Witemeyer - Book Review by: