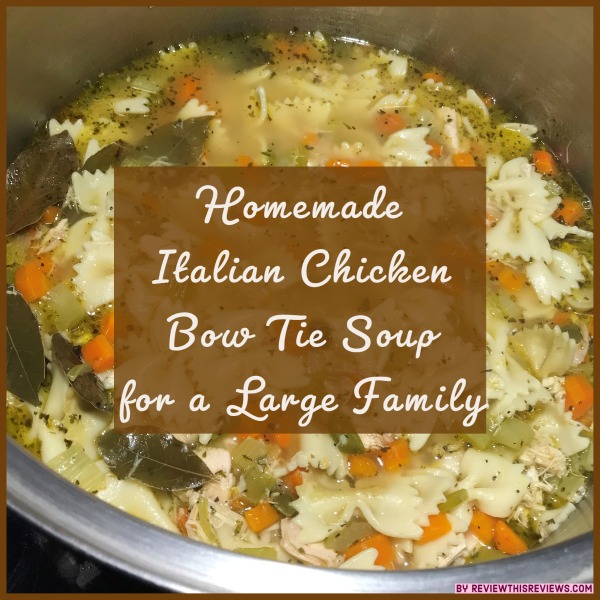 This soup recipe is basically an assembling of flavors that I know my family likes.

I frequently purchase ready-made roast chicken from Costco and other grocery stores. Our family is large, so I usually buy three chickens.

When we're done with the chickens, I use the carcasses to make chicken soup broth. You can use any chicken broth. However, I've prepared enough food for two days by purchasing or making three roast chickens and then making soup.

Step One - Get the Broth Ready
In a large pot, prepare the following: (I use about a 14-quart soup pot - seen below). I fill the pot to about 3/4 with homemade soup for our big family.
Step Two - The Carrots
I add the carrots next because they take longer to cook. I use a whole bag of medium carrots. Scrape them, cut them into biteable pieces, and then add them to the soup broth.
Step Three - Lightly Fry These Ingredients
In a frying pan, melt 4 tablespoons of butter, then lightly fry:
I usually fry them on medium heat for about ten minutes, constantly stirring. Put the entire mixture into the soup broth.
Step Four - The Pasta Bow Ties
I always cook the pasta separately, then rinse them to reduce the amount of starch in the soup.
Step Five - Add the Chicken
Step Six - The Flavoring
I never measure this part; I simply add the amount I think makes the soup taste right for my family. The measurements below are merely for your own guidance.
Step Seven - Add The Boiling Water
At this point, I boil water using my tea kettle and pour the boiling hot water into the soup pot until it reaches about three-quarters full from the top of the pot.
Leave it on the stove on low heat, and let everyone eat soup all day long!