Reviewing Why I Make and Recommend Bannock

Bannock, a type of bread that is made in a skillet or pan on the stovetop or open fire, has been something I have made off and on over the years. But recently, Bannock has been in the forefront. Between being an integral part of a book series I've just read and being what I'm making for breakfast this morning, I thought I'd share with you. 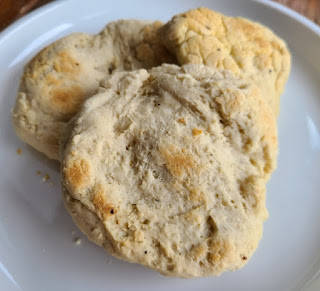 After a Google search, it seems that Bannock (with a variety of spellings) was a Gaelic word meaning "morsel" and is believed to have originated in Scotland. It is a flat, unleavened bread and it is thought to have been introduced to North America by Scottish immigrants.

You'll hear the words fry bread and bannock use interchangeably at times. The Indigenous people of North America make an unleavened fry bread. I believe that the original Scottish bannock used oatmeal and the North American fry bread originated with meal made of corn or nuts. At some point in time, both versions began using flour.

For my personal use and definition, Bannock is a yeastless bread that is made of flour, baking powder, and a liquid and is cooked on an almost dry skillet.  Fry bread is similar but "fried" with a larger amount of oil. I am sure others have their definitions, but this is mine. Bannock is something that hikers, campers, and hunters can easily make while on the trail.

Today has turned cold and stormy. Thunder claps and lightning had me rushing to check on the outside animals before crawling back under the blankets. I felt too lazy to make breakfast but I was hungry. When I finally got up and moving, I made bannocks and scrambled eggs with sausage crumbles. 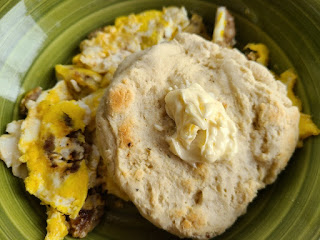 During the moving process from the apartment to my land, my best friend was helping at one point and made a crack that I had "several" cans of baking powder. When I told him that I planned to be able to make Bannock if I get snowed in on the mountain he understood completely. He is an avid outdoorsman who has also made bannock while camping.

I started making bannock when I was camping in "The Shack" on my land. With only 4 ingredients, it was an easy thing to have on hand in off-grid conditions. As the house build began, I camped in the little shed and conditions were more austere. The shed was such a very small space for camping and storing supplies. But I could make bannock on my single camp stove burner.

I use the version by Liz Thomson. The ingredients are:

I use this version because it is the smallest recipe and makes 3-4 small biscuits. I found that olive oil kept well in my off-grid camping situations. There are versions that use butter, lard, bacon grease, and so on. While those version often have more flavor, those ingredients were more difficult for me to make sure I had on hand.
Not only did I make bannock while I was camping I also made bannock at the apartment. During quarantine and supply chain situations, I sometimes made bannock in lieu of bread. I also made homemade bread that required yeast and time to rise - because I had that time. But bannock is much more quick and easy to make. It was great to have with a can of soup. And as I told my friend, I made sure to buy some (okay, many) cans of baking powder ahead. Now that I've moved to a rural area (a mountain ridge in West Virginia) I could easily be snowed in for a long period of time. Bannock is something that I can make in a pan on top of my woodstove if I am without electricity. So I'm set in that regard.
I highly recommend that people try making bannock in the event they want or need an easy-to-make bread at home or on the trail.

Bannock in the Books

I mentioned that I just read about bannock in a fictional series I was reading. I love to read. It takes my mind off of the issues at work. But I don't have much spare time, focus, or energy. So I need the story to grab me and keep me immersed.
I am so glad that I read a series that was reviewed by Sylvestermouse Cynthia here on Review This! The series is the Tales from the Highlands series. Book 3 in that series written by Martha Keyes is The Innkeeper and the Fugitive. Ana MacMorran flees her home and an arranged marriage. She does not want to marry the villainous laird of Benleith. During her criminal escape from this contract, she finds herself at Glengour Inn. There she secretly assumes an identity of another in order to try to hide.
At Glengour Inn, travelers stop for a bit of bannock and drink before continuing on their travels.
I enjoyed the Tales from the Highlands series immensely. If you'd like to know more about the series, check out Cynthia's book reviews:
The Widow and the Highlander (book 1)
The Enemy and Miss Innes (book 2)
The Innkeeper and the Fugitive (book 3)