Review of Life of Pi by Yann Martel 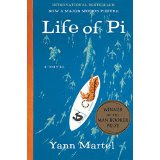 I stumbled on The Life of Pi at the library, knowing it was a bestseller, so I decided to see what it was all about. It was hard at first to believe it was fiction. It read very much like an autobiography, except that it wasn't real. Pi (actually Piscine) Patel, the protagonist, grew up in India, the son of a zoo keeper.

Most of his story is told in the first person. He spent a good part of his free time at his father's zoo in Pondicherry (a zoo which never existed), and I personally enjoyed most the beginning of the book where Pi talks about how he got his name and the characteristics of the zoo animals. He also tells the story of how his father taught him and his brother to respect the animals as the wild beasts they were so they would not be tempted to treat them like tame animals, no matter how cute they seemed. It was a terrifying lesson even to read about.

One of the most interesting parts of the book to me was Pi's unique take on religion. He had interacted with local Christian, Hindu, and Moslem teachers, and he joined and practiced each faith. He tired to keep each religion separate in his life, and none of the teachers knew he had joined any faith but their own. His own parents didn't care much about any religion, and they didn't think much of Pi's religious life. Everything seemed to work for Pi until one Sunday afternoon when he was sixteen, when he happened to be with his parents on the Goubert Salai seaside esplanade. It seemed the whole town was out for a stroll, and that included the three clerics.

They approached Pi's family at the same time, and each began to brag about him as their star pupil. The priest remarked on what a good Christian boy Piscine was. The imam claimed him as a good Muslim boy. The pandit declared them both wrong, since Piscine was obviously a pious Hindu. The clerics argued religion with each other, and seemed in agreement that Pi must choose just one of their religions. I will leave it to you to read the book to see how this was resolved.

Pi's parents finally decide that Prime Minister Indira Gandhi's policies are disappointing. They had hoped for a more tolerant “new” India, and when they believed they would never get it, they made the decision to close the zoo, sell off the animals, and emigrate to Canada. Pi and his brother Ravi did not want to go, but they did not really have a choice. After the endless paperwork was done, the family left Madras in 1977 on a Japanese cargo ship. 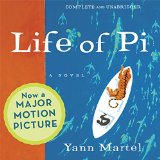 The ship sank. He is in a lifeboat. He sees the tiger, Richard Parker, in the ocean and starts to rescue him before he realizes how foolish that is. At the last moment as he is pulling the tiger into the boat he suddenly wakes up to what the two of them together on the lifeboat would mean, but by then it's too late, the tiger is too close, and pulls himself into the boat. Hear this scene read aloud.  Get the complete Life of Pi audiobook here. 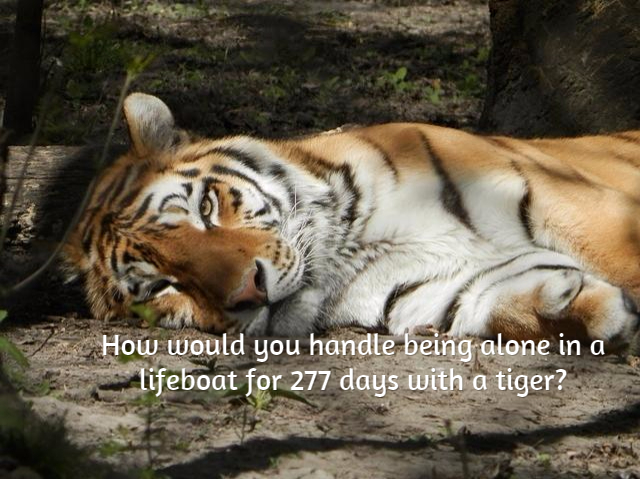 Through most of the rest of the book Pi is stranded on a boat. At the beginning there are three animals and no other humans. There was a zebra with a broken leg, a spotted hyena, and the 440-pound Bengal tiger named Richard Parker. They were all animals that had been on the Japanese ship. Pi had to use all he had observed at the zoo and all he had learned about the animals, especially tigers, to survive. For most of that long journey in the lifeboat, his only companion was the tiger, and he had seen what a tiger was capable of.

Although I'm glad I read the book, I don't really enjoy survival stories very much, and I really got tired of the constant battle of wits on that boat. I just wanted Pi to be rescued. But the monotony of life on the boat reflected the monotony of life for Pi, tired, thirsty, having to fish to feed himself and the tiger, and just watching day and night go by.

I recommend this to those who are interested in religion, philosophy, wild animals, zoos, and / or survival stories. The philosophy is not tedious, and the Pi's search for the right religion often borders on humor while offering a glimpse into each of the three faiths presented. For those who would like more background on the book, I suggest this interview with the author, Yann Martel.

This exciting book has also been made into a movie.