I am the recent caretaker of a Venus Fly Trap house plant.

I wasn't sure I wanted one of these carnivorous houseplants plants but hubby has wanted one for a long time so I purchased it for his birthday this year.

From being really quite indifferent to this particular plant, I have developed a real interest and curiosity about it.

To be fair I had heard they were quite difficult to care for and I wasn't sure I was wanting the task of trying to keep it alive.

However, I love how it is growing and flourishing in our home and it has been interesting learning all about it. The plant looks happy and has grown and developed well so that gives me joy!

It is also named the species Dionaea muscipula -though there are many named cultivars with some different looks and habits. Part of the family of carnivorous plants, it only grows in a few places in nature now. Sadly habitat destruction has obliterated it from many of its sites. It can still be seen in the coastal bogs of North and South Carolinas.

As for most of us, we will keep this plant in a plant pot so we need to copy its natural environment as much as possible. It likes to grow naturally in soil with very low nutrients and dampness all the time. However these days it is not advisable to use endangered peat supplies. So without using at-risk peat mixes you can buy specialist mixes or try the plant in sphagnum peat moss, or fine-milled bark mixed with lime-free horticultural sand or perlite, or just simply in pure sphagnum moss.

Repotting if needed should be done just before the end of winter, so around February for us before all the new regrowth begins. 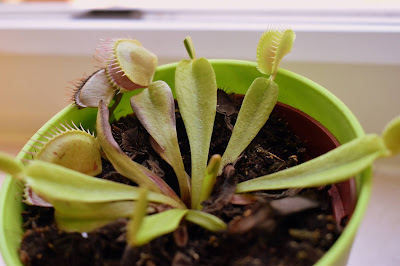 With Venus Fly Traps watering is a fine balance. They do need the soil to be moist but not waterlogged, neither do they wish to dry out.

So in the growing season, they like to be in a little standing water so I put a saucer under the draining pot and the saucer has a covering of water in it as it simulates the conditions it would have in the wild damp with higher humidity.

During winter the plant should be kept damp but they do not need so much water so I will likely remove the saucer and just make sure the soil is damp to the touch.

This plant by far prefers rainwater. So I now keep a bucket outside to collect rainwater for this plant. If I forget then I do use tap water that has been left to stand for about 3 days to help dissipate the minerals and chemicals but even so, to be honest, it is not ideal and long term use of tap water is not good for Venus Fly Traps and will kill them.

Venus Fly Traps which are kept outside will be able to find enough food for themselves. We put ours outside as much as possible on fine sunny days and the rest of the time on our sunny kitchen windowsill with the window mostly open and it certainly found enough food.

If you really can't do that then it is possible to feed it yourself with freeze-dried mealworms, which can be bought from shops, but it is a specialist skill to read up on a specialist site. To be honest, it is not something I really want to have to do, so we will stick with a sunny open window and putting it outside as much as possible in summer!

We do not need to use a plant fertilizer on a Venus Fly Trap, it is adapted to grow in nutrient-poor soil and feeding it in this way will only be harmful.

Position in The Home For A Venus Fly Trap

A Venus Fly Trap will always require a sunny position in its growing season but does not like being in the direct hot sun all day.

So aim for about 5 hours of bright sunlight. A sunny windowsill with the window open for part of the day is good. However, do not let it get scorched by the sun.

I have also during this summer put it outside in a sheltered sunny spot for a few hours and it really did seem to like that.

I would also keep it out of reach of small children and pets, not so much that it is any danger to them but constant touching of the plant's traps, which are often fascinating to children,  may cause it to die.

Winter With A Venus Fly Trap

We have not yet been through a winter with our plant but there are a few things to bear in mind for its survival.

They do need a period of winter dormancy which in the UK is around November to the beginning of March. As they live in our homes, not the wild environment we need to try to replicate that so they need to have somewhere cold to rest.

We will therefore be moving ours from its sunny warm spot on our kitchen windowsill to a colder place in our home. If I had an unheated greenhouse it could go in there but instead, I will move it to a cold windowsill that is north facing. It's the coolest place in our home and I am hoping it will be cold enough.

I have been warned not to panic during winter as the leaves will turn black and the beautiful little plant will die right back. At this point, we will trim off any dead growth. Then it is just a matter of keeping it damp and waiting for new growth in Spring!

Information About the "Traps"

As it is a carnivorous plant its method of gaining nutrition is a little more gruesome than with most plants. It first needs to attract its prey which it does by exuding sweet nectar.

The flies come in and movement triggers the tiny hairs and then the trap snaps shut just like a cage from which the insect cannot escape.

After that digestive enzymes dissolve the insect and use it for nutrition. The traps stay shut for about 5-8 days then open up again to restart the process with the added bonus, if you are a Fly Trap- of the leftover carcass also being used to attract more prey.

I feel I should say at this point that we have not noticed any more flies coming in due to having this plant. In fact, we probably have less making it past the plant into the house now!

The Cycle Of The Traps

When a trap has opened and closed a few times, probably around five times, it goes black and dies off. For that particular trap, it is the end.

However, before that happens we see several new traps growing to take their place.

I am more than happy to see now that when I bought it only had 4 traps and now it has double that amount so this shows the plant is happy. Over time and with care it will get better and bigger.

Children find these Venus Fly Traps fascinating and the book below is a great informative and fun introduction to these amazing little houseplants.

A Word Of Warning About Venus Fly Traps

If you have one of these fascinating plants it is very important not to test out the traps by putting your finger or a pencil etc inside them.

While it may seem like fun, to the plant it is torture. Every time the trap shuts it uses up energy and if there is no food in the trap then it has just wasted so much energy. Traps only close about 5 or 6 times before they die so if it is tormented like this with no food it will deplete the plant and eventually the whole plant may die.

However, you cannot really hurt yourself on this plant. Just avoid touching it as much as possible for its own sake.

So having been initially quite wary of this carnivorous houseplant the Venus Fly Trap, I am now more than fascinated with it and it is an unusual addition to our houseplant collection!

Reviewing How To Take Care Of Your House Plants On Vacation

Reviewing The Care Of Living Stone Flowers or Lithops As Houseplants

Reviewing The Growing And Care Of Dracaena As A Houseplant

Caring for A Mother In Laws Tongue As A Houseplant Reviewed

Reviewing The Care Of Living Stone Flowers or Lithops As Houseplants

The Spider Plant As A Houseplant Reviewed

All Gardening Reviews By Contributors On Review This Reviews