Review of Tips on Photographing Waterfalls 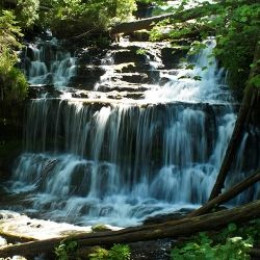 The Upper Peninsula (UP) of Michigan is known for large snowfalls. It is not unusual to have over 200 inches of snow in a season and the record snowfall stands at 390.4 inches according to a sign we saw in the Keweenaw Peninsula. When all of this snow melts in the spring the waterfalls in the area are full of rushing water. In the UP you will find over 324 different waterfalls.
When we visited, in mid June, we found waterfalls everywhere we went. Many times we would pull off the road and hear the rushing water. Other times we would follow signs that led us to paths to the nearby waterfalls.
Earlier in the spring, I had attended a class where the instructor gave us tips on photographing waterfalls, so I was anxious to try out these tips and photograph some waterfalls.
On this page, I will pass on the tips that worked for me as I show you photographs from 5 of the waterfalls I photographed in Michigan. We returned to Michigan in September and was able to photograph the beautiful Tahquamenon Falls. I am adding that photo near the end of this page.
all photos by myself-mbgphoto

The first waterfall that I photographed was on the side of a busy road. My husband pulled off the road and I jumped out with my camera. The ground in front of the waterfall was rocky and hilly and I thought I could shoot it without a tripod.
I use aperture priority when I shoot. This allows me to pick the aperture and the camera sets the speed. In order to get a slower speed to get the smooth waters that I like to take you have to use a larger number on your aperture. Ideally I would like to use an F22 or higher but without a tripod the largest number I could use successfully for this photo was a F11. This gave me a speed at 1/20 a second. It was not really good enough for what I wanted, but then I was in a rush.
The resulting photo is, in my opinion, mediocre. In the photos that follow you will see the results when I use the following tips.
1. Always use a tripod
2. Slow down and take your time
3. Use a polarizing filter to reduce the glare and slow the speed
4 Use a remote shutter release

This beautiful waterfall was located near where we were staying in Munising. We parked in a lot and then I walked a well maintained path into the woods for about 1/2 mile to reach two of the viewing platforms for the waterfall. This waterfall has a breathtaking 50 foot drop into a canyon.
The platform for viewing made it easy for me to set up my tripod to get a good shot. A tripod is essential to get the smooth looking water in this photo. I shot this photo using the aperture setting of F22 this gave a shutter speed of .6 seconds. I had my ISO set at 200 and used a shutter release to keep the camera steady.

The Wagner falls was also near Munising, Michigan. It starts with Wagner Creek which flows over a number of rocky ledges to create this beautiful waterfall. There was also a tree limb that had fallen across the area, which added to the falls of the water.
I got to this waterfall by walking a short gravel path to a viewing platform. As was the case for the Munising Falls, the platform made a perfect place to set up my tripod. I was shooting from several angles, moving around the platform, when another photographer came and stood near me. He watched me for awhile and then inquired as to whether I had a polarizing filter in my camera bag. Now, I knew that was a way to slow down my shutter speed, but I had forgotten to add the filter. I thanked him for the tip and then went and put on the polarizing filter. This made a really nice difference.
It was a sunny day and the filter helped to reduce the glare and slow down the speed. I was able to shoot this photo using a F25 aperture and a speed of .5 seconds. I was pleased with the smoothness of the water in the resulting photo.

Wagner Falls with an Aperature of F8

Wagner Falls with an Aperature of F8

The next two waterfalls are ones that we encountered as we were visiting lighthouses in the Keweenaw Peninsula in upper Michigan. In both of these photos I remembered to use all of the waterfall photography tips I had learned. I took my time, used a tripod, used my polarizing filter and used an off camera shutter release.
In this photo of Jacob Falls I used a setting of F22 which gave me a speed of 1/3 second. I also pushed my ISO down to 100 to further slow the speed.
In the photo of Eagle River falls I used a F22 setting at 1/15 second.

Tahquamenon Falls - beauty in the fall

Tahquamenon Falls
The Tahquamenon Falls are beautiful. They have a orangish brown color that comes from the tanic acid that leaches into the river from cedar and hemlock swamps. When we were there in September of 2013 I took many photos of the falls. Sometimes I tried to capture some of the fall colors of the trees to pick up on the orange color of the water. On other photos I looked for a way to frame the falls to show off the beauty of the falls.
In this photo I found a place where I could take the photo with a tree stem on each side of the picture. I think it works well to frame the photo.

My Waterfall Photos on Zazzle