The first Missouri capitol was in St. Charles.  Although we have lived very near for nearly 20 years, I had never been on a tour of this first capitol until recently. I was on an outing with a group that I serve as a photography mentor and our outing included a tour of the first capitol.  The outside of the building does  not look very exciting so I wasn't sure what to expect and I was very pleasantly surprised.

Missouri was granted statehood on August 10, 1821.  Before that time various locations in St. Louis had served as the place where decisions were made for the territory.  Once it looked like statehood would become a reality a search went on to find a permanent seat of government.  A location was picked in the center of the state overlooking the Missouri river.  This new location was called "The City of Jefferson" and today we call it Jefferson City.
While construction of the new capitol was taking place the first legislator needed a place to meet.  Nine different cities were competing for the honor.  One of these cities, St. Charles, pledged free meeting space for the temporary capitol.  St. Charles was located on the Missouri river and had great access to areas throughout the state by either the river or the Boonslick Road.  The first Govenor Alexander McNair signed a bill making St. Charles the first capitol of Missouri.  The legislator met in St. Charles for the first time in June of 1821.   At that time the heated discussions of the legislature centered around slavery and state's rights.

The first legislator met on the second floor of the two newly constructed adjoining buildings.  The first floor was occupied by a general store and a carpentry shop. In the photos above you can see what the senate and the house of representatives looked like.
Our tour guide gave us some fascinating insight into what the meetings would have been like back in the early 1800's.   In the photos above you see what each of the meeting rooms looked like. The senators each had tables they could use but the representatives sat on benches.  Our tour guide showed us the "Laptops" like what they would have used to in order to take their notes.  Here is a photo I took of the laptop. 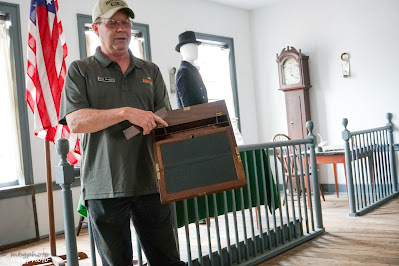 It would have been like a mini desk, with compartments to hold the writing instrument, the ink and other essentials.  They could hold it on their laps to use instead of a desk.
After seeing the legislators we went to the next room upstairs which was the govenors office.
Here is a photo of that office.

Four Missouri govenors were in office during the time the capitol was in St. Charles.  The new capitol was ready in 1826.

The tour also included a look at a reconstructed Dry Goods store.  It included items that would have been in that type of store during the early 1800's.  Here is a photo I took in the store. 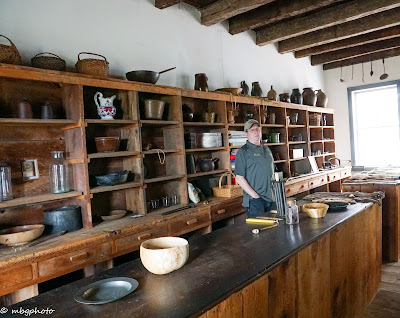 Sources for this Review

My sources for this review are the information provided for us by our docent, Mike.  He was an excellent tour guide and provided some very interesting information on what life was like during the early years of Missouri statehood.
I also used information I read on a pamphlet I picked up during the tour.  The information was published by Missouri Department of Natural Resources.  Their website is www.mostateparks.com.