Can I Give Him My Eyes Book Review 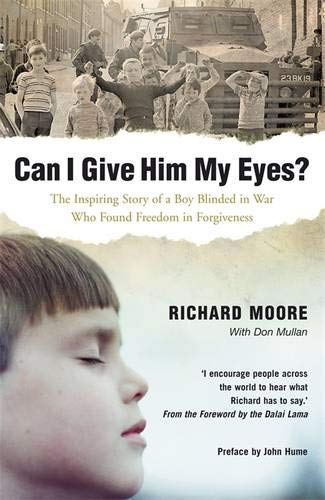 Can I Give Him My Eyes is a biographical book that was written by Richard Moore with the assistance of his long-time friend and supporter, Don Mullan. It tells the story of a ten-year old boy who loses his eyesight on May 4, 1972, on the way home from school when he is shot by a soldier during The Troubles in Ireland.

According to Moore’s book, he was just passing by when he was shot. The rubber bullets were supposed to be used to control crowds and riots but to this day Moore does not know why he was shot.

In any case, those rubber bullets, which were thought to be a relatively safe way of controlling riots, turned out to be more dangerous than anticipated. Moore survived being; other children did not.

If you would like a look at The Troubles in Ireland, this book will be a good education. I learned of it while on a trip to Ireland in 2018 during which I visited both the Republic of Ireland and Northern Ireland.

Of course, 2018 was a safe year to visit, unlike the years of the Northern Ireland Conflict, which spanned approximately 1968 to 1998. During those years there were riots, shootings and bombings almost every day. In the end, the conflict killed almost four thousand people and of course it also left many victims behind. The antagonism between the Irish Catholic population and the British army and especially the events of Bloody Sunday caused fear and hatred of the army from the people and no doubt fear and hatred in return. The tense atmosphere was likely the reason that Moore was shot despite the fact that he was a child passing by and not participating in a riot or public gathering.

Can I Give Him My Eyes is not just about the loss of Moore’s eyes. The catastrophe happens early on in the book, which is also about his journey in life, about how he learned to cope as a blind person, about the upheaval it caused his family and about how it changed and set the direction of his life.

Moore manages to accept the fact of his blindness almost right away. He carried forward no bitterness or anger, which he attributes to his parents who were peaceful and never spoke bitter or angry words. The Dalai Lama, who Moore eventually met and who Moore considers to be both a hero and a friend, once said and Moore agrees that, “Forgiveness is a gift to yourself.” Moore could have been bogged down by the event and the reality of being blinded but instead he moved on and let his situation propel him forward to experiences that he might not otherwise have ever had.

He has a university degree, has had two businesses, is a musician and, as a peace and reconciliation worker, started an organization called Children in Crossfire to help children in troubled situations around the world have opportunities that they might not otherwise have. He had lots of support and kindness as a child and as an adult and he wants to make sure that others in difficulty do, too.

Interestingly, Moore eventually goes on to meet the soldier who shot the rifle that injured him. They have become friends and they have even worked together. On the cover of Can I Give Him My Eyes, His Holiness the Dalia Lama, says, “I encourage people across the world to read what Richard has to say. Despite his own loss, he has found freedom through forgiveness.”

This book is RECOMMENDED by me. Not as a page turner but rather as a look at the troubled times in Ireland and at one man’s lifetime journey because of his injury. You can find your copy on Amazon by clicking right here.

See you
at the bookstore!
Brenda
Treasures By Brenda