I Wish I Had Thought of That! 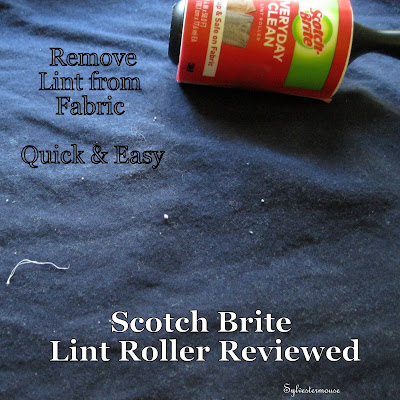 How many times have you come across something that makes everyday life a lot easier and wondered, "why didn't I think of that".  You know, the things that are so simple and obvious, yet somehow you didn't consider it until someone else develops and markets them.

That is exactly how I felt when I was first introduced to the Scotch Brite Lint Rollers.

I can't begin to count how many times I have tried to pick lint off of my dark clothes before I leave the house.  I certainly remember times when I have hung something back in my closet because I didn't have time to use the old fashioned lint brush on them and I would not be seen in public covered in lint, threads, fuzz, and dog hair.

Since I discovered the Scotch Brite Lint Rollers, that is no longer a serious concern.  I have even been known to roll the black slacks I was currently wearing, in the car.  You may wonder, why would I wait until I am in the car?  That answer is obvious when I tell you we have pets.  Between by grandkitties and my own furbabies at home, there have been times when I felt like they had gifted me with a new full-length fur coat.

Lint or pet hair sticking to my clothes seems to multiply exponentially during the winter thanks to static cling.  I can pull a garment out of the dryer only to find it covered in lint.  I can't help but think to myself, "seriously! I just washed this shirt!"  That is exactly how I felt when I removed the shirt shown in the photo from the dryer and saw all of the lint.

I grabbed my Lint Roller and went to work, right there on the top of the dryer.  In a few short minutes, the job was completely done and the shirt was lint free.


Scotch-Brite Lint Roller, 2 RollersCheck PriceIt is likely that you have already discovered the value of having these inexpensive, disposable lint rollers on hand.
If not, please allow me to tell you all about them.

The Scotch Brite lint rollers are like having a large roll of tape on a handle that easily glides across clothing, removing the lint and threads as it rolls.  Pretty easy and awesome, right!

Then you simply tear off the top layer, which is perforated for easy tearing, and throw away that piece along with the lint.  Tossing it with the lint attached keeps the lint from flying back up and re-adhering to your clothes.

Not only do the lint rollers work well on clothes, I use them on pillows and fabric furniture.  That certainly makes my family and our guests a lot happier.