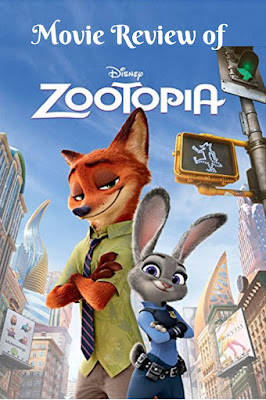 Disney Zootopia is a really cute animated movie that features all animals.  As you can see in the photo on the right, the main characters are Judy Hopps, a rabbit, and Nick Wilde, a fox.  In addition to Judy and Nick, there were several other animal characters in this movie that I loved.

I really like the story line and the message that "you can be anything you wanna be".   The movie doesn't make light of the reality though that it often takes hard work and real commitment to achieve your goals.  It also touches on how preconceived opinions or past experiences can influence your thoughts when you first meet someone.  I really liked the way each character faced and dealt with their prejudices and negative attitudes to overcome them.

The characters are adorable and the animation is fantastic!  I also enjoyed the music.  Overall, it was a great way to spend 108 minutes.

The DVD cover quotes Germain Lussier, "The Best Film Disney Animation Has Made in 20 Years", and I would agree.


The Plot of Zootopia


Zootopia (Plus Bonus Features)Check PriceJudy Hopps, the leading bunny, wants to be a police officer when she grows up.  That is not really a job most would believe is appropriate for a  bunny rabbit.  Even her parents try to dissuade Judy.  However, Judy is determined.  After she gets through the police academy, she is sent to Zootopia, which is appropriately named.  It is an animal utopia.  Predators and prey coexist without the natural desires to hunt or the natural fear of being the prey.

Judy finds herself surrounded by fabulous large beasts who are her fellow police officers.  On her first day, assignments are handed out.  There are a dozen missing animals that don't seem to have any obvious commonalities.  However, Judy is not assigned to find any of the missing animals.  She is assigned to parking duty to hand out tickets.  It seems like a safe place for a bunny officer.  Of course, that assignment does not make Judy happy at all.  However, she strives to make the best of it.

While writing parking tickets on her very first day, Judy sees a fox (Nick) and his "child" enter an ice cream shop owned by an elephant.  Nick wishes to buy a treat for his "son", but the owner refuses to serve a fox.  That is, until Judy comes to their defense.  Later that day, she finds that she was duped by the sly fox.  However, it turns out that the fox is just who she needs to help her find Mr. Otterton.

As you have probably already guessed, Mr. Otterton is an otter that is missing, but he isn't one of the individuals the police are most worried about finding.  But, Judy willingly takes the case!  And that is when the real action begins.


My Recommendation of Zootopia


As an adult and animal enthusiasts, I really enjoyed the movie.  I especially loved the scene that included the sloths, who work for the DMV.


The movie is rated PG and for good reason.  I do recommend that parents watch the movie first to determine if it is suitable for your own children.  Most notably, there are a few crude words that a parent may not want their very young children hearing and definitely not repeating.  Otherwise, I would say Zootopia is a fun movie to watch for both children and adults.