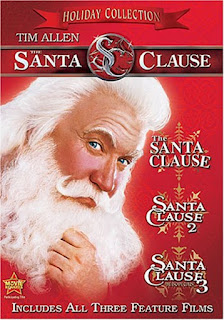 A few days ago, I was looking for a movie to watch so I could take a break from work.  I wanted a movie that would be easy to watch.  Not one that required a lot of thought or emotional investment.   Comedy preferred.  After scrolling past dozens of Christmas movies, my husband recommended "The Santa Clause".   My first reaction was negative simply because I am not really a big Santa fan, however I am a Tim Allen fan.  Since nothing else appealed, I thought why not!  It turned out to be a really good choice and I ended up watching all 3 movies in the Santa Clause collection.  The movies were lighthearted and funny.  Perhaps, even enchanting and magical.  That was the perfect combination for my movie day.


Plot of The Santa Clause Movies

Scott Calvin (Tim Allen) is a divorced father who spends most of his life working. He is pressed for time as he is rushing home on Christmas Eve to meet his ex-wife who is dropping their son off to spend the night. As was obviously the norm during their marriage, Scott and his wife's conversation turned into an argument when Scott discovered his ex-wife and husband told his son, Charlie, that Santa was a myth.  He felt that was a decision that he should have been consulted about beforehand and not just informed of after the fact.

The Santa Clause DVD
(Full Screen Special Edition) Scott wishes to make his son's Christmas Eve perfect.  He tried to make the perfect dinner, but burned the turkey.  They ended up having to eat dinner at a restaurant.  He read "Twas the Night Before Christmas" to his son, but Charley fall asleep while he was reading, or at least it appeared he was asleep.

After Scott had gone to bed himself, Charley heard a noise on the roof and ran to his father's bedroom.  Scott immediately ran outside without getting dressed to investigate and saw Santa on his roof.  He yelled up at the man on his roof and startled him so bad that Santa fell off and onto the snow covered ground in front of him.  Searching him for identification, Scott found a business card inside the coat that simply identified the man as Santa Claus.

When Charley came running out, he saw the reindeer on the roof and wanted to climb the ladder that mysteriously appeared.  Of course, Scott followed, but he was freezing.  When he looked back at the spot where Santa had landed, the man had disappeared but his clothes were still laying there on the ground.  He grabbed the suit and started up the ladder.

Charley and Scott climbed into the sleigh and at Charley's insistence, Scott put on the Santa outfit.  The reindeer took off!  They delivered gifts miraculously appeared in the Santa bag at each house where the reindeer stopped.  Then, Scott said "let's go home" and the reindeer took them to the North Pole.  It was there that he discovered that by putting on the Santa coat, he had agreed to become Santa as stated on the card inside the Santa suit.  Of course, as with many legally binding contracts, the clause was written so small on the card, that Scott could not read it without a huge magnifying glass.  They were "returned" home the next morning, but Scott immediately started noticing a difference in his appearance.  He gained a lot of weight and even after he had shaved, a beard would immediately start growing back.  He was becoming Santa whether it wanted it or not.

The ending was expected, but still cute.  The story was fun and easy to watch.  When I noted that was a "Santa Clause 2", I wanted to continue watching.

I actually liked the second movie even better.


In this movie, Scott, who is now Santa, is informed that he must marry if he wishes to remain Santa Claus.  The story is mostly about him seeking a wife and how he met the woman who would end up becoming Mrs. Claus.  However, my favorite part of this movie had to be Comet, the reindeer.  I also liked that they included a council of other fictional characters like mother nature, father time, the Easter bunny, the tooth fairy, and more.  Those characters made this movie truly delightful.

Between the dialog of the fictional figures, the animated reindeer and Tim Allen, I found myself laughing out loud several times during this movie. Plus, it is truly amazing how much Tim Allen looks like a plump, rosy cheeked Santa.


In this final movie, we are introduced to "Jack Frost" who wants equal status with Santa, mother nature, father time and the rest.  When Frost discovers the secret of the "escape clause" for a serving Santa, he devises a way to trick Santa into returning to his former life so Frost himself can become Santa Claus.

All of these movies were filmed and released over a decade ago, but I just discovered them.  Since I enjoyed watching them so much, I decided the collection should be reviewed and recommended to anyone else who may have missed seeing them in the past.  I can tell you based on my own experience, that even those of us who do not fully embrace Santa Claus, will still enjoy these delightful movies.