The iconic lighthouse above is seen on the package of Cape Cod potato chips and has become a symbol of Cape Cod.

Nauset lighthouse was originally one of the twin towers in Chatham which were built in 1808. When erosion claimed these lights they were replaced by metal ones in 1877.  In 1923 one of the Chatham lights was restored and moved to Nauset.  The beacon on the light has been fully restored and is used as a private navigation aid.  The lighthouse is listed on the National Register of Historic Places.  It is a very popular tourist attraction and although it is privately owned you can get private tours in the summer.  I was able to walk the grounds and photograph it from several angles.  I love the bright red and white colors on the lighthouse. 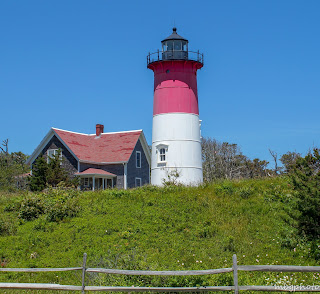 If you think this lighthouse looks familiar, it may be because you have seen it on the package of Cape Cod potato chips.

Just a short walking distance away from the Nauset lighthouse you will find the restored Three Sisters lighthouses which originally were located on the Eastham coast.  The original buildings fell into the sea around 1890.  They were restored in the early 1900's.  Two of the three lighthouses were at one time summer cottages.  They are now located in Cape Cod National Seashore. 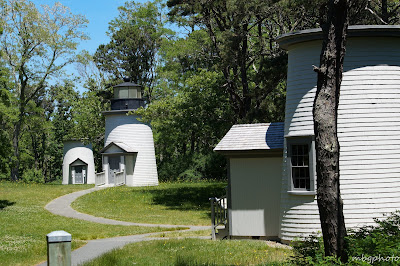 I have taken many photographs in the past few years since I became enthused about lighthouses and in my quest to find a way to share them with others I came across Zazzle.  This print on demand site is a great place for me to put my photos on products that can then be purchased.  Here is one of my photos on a metal print from Zazzle.  Click on the link to discover other lighthouse gifts on Zazzle. 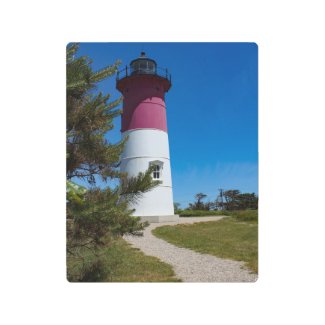