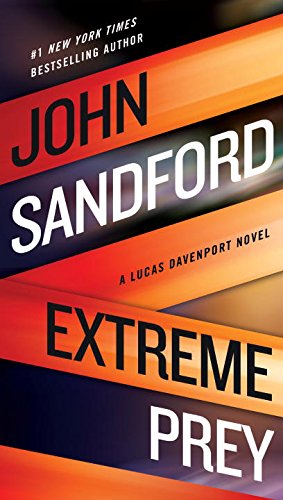 First off, a confession. I have not read a SINGLE solitary John Sandford book. There are, however, many of them in my household.

Over the course of the last couple of years, my husband Chris discovered John Sandford and worked to collect and read his way through every single one of Sandford's books. I have a feeling there will be a Sandford book in my future.

Chris' most recent read was Extreme Prey and what follows is his review, which I thought I would share with you here.

In the previous novel, the protagonist Lucas Davenport was leaving the Minnesota Bureau of Criminal Apprehension (BCA) with his daughter Letty asking, “What are you going to do next?” Extreme Prey flawlessly transitions Davenport from a badge carrying cop to a private citizen doing a favour for the state governor Elmer Henderson; a favour that finds Davenport investigating a potential threat against a presidential candidate. The fact that Davenport is not carrying a badge and has no authority kicks the story up a notch. Davenport uses old contacts and his reputation to gain support from local police while trying to convince others that there is a real and credible threat. Of course the threat is real and time is short, so the action is non-stop.

As the story unfolds, Davenport chases loose threads of evidence as he puts pieces of the puzzle together until the climactic scene arrives that is so engulfing that it will make you miss your bus stop; at least that happened to me.

For long-time fans of John Sandford, Extreme Prey effectively interweaves characters from previous books into the action as well as providing cameo roles for characters from the Virgil Flowers and Kidd series, also by John Sandford. If this is your first time reading a John Sandford book and don’t insist on starting at the beginning of a series, you will find a great read that can stand alone. Sandford gives you enough information to introduce every character without slowing down the action or distracting from this story.

Extreme Prey is HIGHLY RECOMMENDED for anyone who likes police mysteries. For current fans of the “Prey” books you will find it an exciting surprise as Lucas Davenport adapts to not having a badge and the official support of the BCA. Personally I am already looking forward to Golden Prey scheduled for release in April 2017 to see what’s next for Lucas Davenport.

Extreme Prey definitely sounds like an excellent read to me and I have to thank my husband for the introduction to another author and for writing this post. I am especially thankful that he shared the fact that this book caused him to miss his bus stop. What a hoot!

Will there be a John Sandford book in your future?