Right Behind You by Lisa Gardner – A Book Review 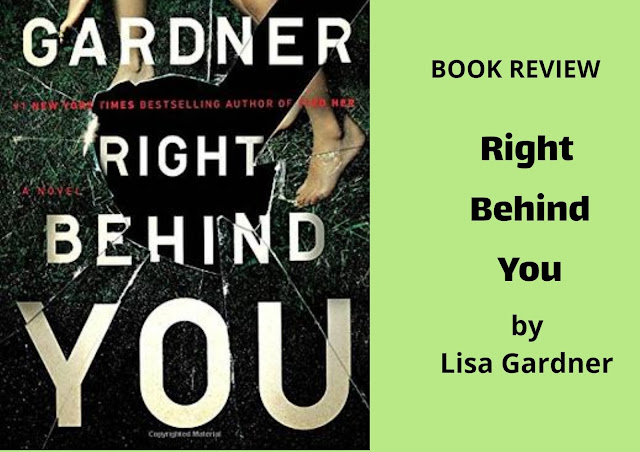 Lisa Gardner has two popular series in her list of suspense novels, the FBI Profiler Series and the Detective D.D. Warren Series. Right Behind You is the seventh (and latest) book in the Pierce Quincy/Rainie Conner FBI Profiler series

After writing the first six books in her FBI series between 1998 and 2008, Gardner went on to write 11 books in the D.D. Warren series, along with six non-series books. Now she finally returns with another Quincy and Rainie story at the insistence of her long-time fans. THIS fan is delighted, as these characters are my favorite of all her books.

Pierce Quincy is now a retired FBI profiler and Lorraine (Rainie) Conner is a retired police detective. They are married and also partners in a Cold Case or weird murders consulting business, helping small local police departments who lack the personnel and equipment to handle a major violent crime. In Right Behind You they have also been foster parents for the past three years to Sharlah, a 13-year-old orphan girl they are soon to adopt.  Suddenly they are involved in a case that hits far too close to home.

As Quincey and Rainie begin to assist their town sheriff with a double murder at a local gas station, more murders are discovered and the suspect appears to be the foster son of a local couple who, it turns out, is also Sharlah's older brother. Eight years ago the brother, 9-year-old Telly Ray Nash, saw his father kill his mother and then come after the children.  Telly beat his knife-wielding drug-addicted and drunken father to death with a baseball bat to save both him and his little sister Sharlah.

Now 17, Telly is suddenly being blamed for the recent murders. A massive hunt for Telly is launched and Quincy and Rainie must answer two critical questions: Why after eight years has this young man started killing again? And what does this mean for Sharlah?

Sharlah has her own questions. Is her brother who once saved her life a hero or a killer? And how much will it cost her new family before they learn the final shattering truth.

Right Behind You by Lisa Gardner, published in 2017, is available in hardback, in paperback, as an audio book and on Kindle.

*Interesting Note: Titles cannot be copyrighted in the United States. Therefore, two or more books can have the same title.

Another book by the same title of Right Behind You is by Rachel Abbot and is reviewed here on ReviewThisReviews by Louanne Cox (Lou16).